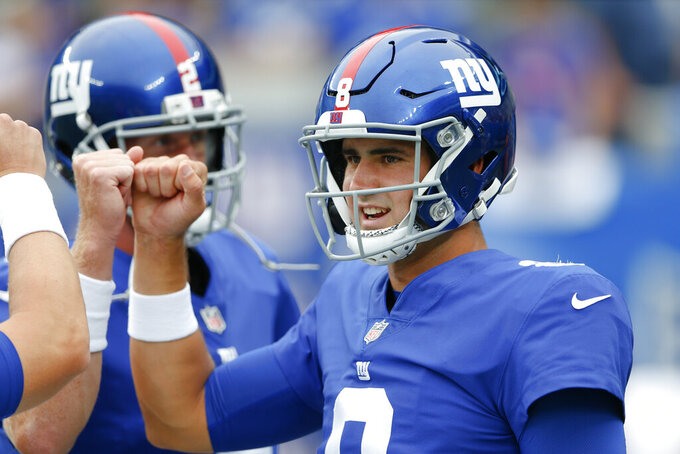 EAST RUTHERFORD, N.J. (AP) — With the season opener against the Denver Broncos four days away, New York Giants quarterback Daniel Jones and offensive coordinator Jason Garrett walked on the grass field as the team headed to the locker room Wednesday after practice.

It was a leisurely stroll with Jones occasionally throwing a football or two toward the goalpost or some other object on the field. The third-year quarterback would then retrieve the ball. Occasionally, Garrett, a former NFL quarterback, would throw a ball at something.

It seemed like the two were taking time to unwind and just maybe talk football in the fresh air under a clear blue sky, made more enjoyable by a nice breeze.

When asked about the session, Jones broke into a broad grin and almost started laughing. That's rare for the never-say-too-much 24-year-old from Duke.

“I mean, it’s kind of a game we play, an ongoing competition,” Jones said. “There’s a score kept. We’re competing. It’s not a BS situation.”

Just before Jones left the field, he tried to throw a pass into a plastic garbage can about 20 yards away. He missed.

"There’s several different games we play and the last one is a target game where we pick a target and go for it,” Jones said.

This is a big year for Jones and the Giants, who were 6-10 in Joe Judge's first season as coach. Jones was drafted with the sixth pick overall in 2019 and took over for the retiring Eli Manning after two games.

The record is the concern for Giants fans. Jones has not shown he can led a team to victory consistently. Of course, he has never had a lot of talent in his receiving corps, his line is shaky and last season he was without star running back Saquon Barkley for the final 14 games because of a torn knee ligament.

Many fans and analysts see 2021 as a make-or-break year for Jones, who counts $7.17 million against the salary cap.

Jones doesn't see it that way.

“I guess my mindset is just to, you know, go out and help this team win games,” he said. “I think we’re in a position, we’ve had a good camp and we’re prepared. My job is to put the team in a position to win games, to protect the football and distribute the ball to the guys who can make plays.”

They join veteran receivers Darius Slayton and Sterling Shepard and tight end Evan Engram. Barkley also is about ready to return following a long rehab, but his status for the opener is uncertain.

Jones also should benefit from having a full offseason and training camp. The pandemic limited the amount of work the team had in preparing last year.

Judge said Jones has worked to maximize his potential. The coach said he doesn't like “rah-rah guys” and prefers players like Jones who go out and do their jobs.

Center Nick Gates said Jones is always prepared. He shows up at 6:30 a.m. and many times leaves after 9 p.m.

Gates smiled when asked if Jones was as tight-lipped with his teammates as with the media.

The Giants are hoping they get wins from Jones.