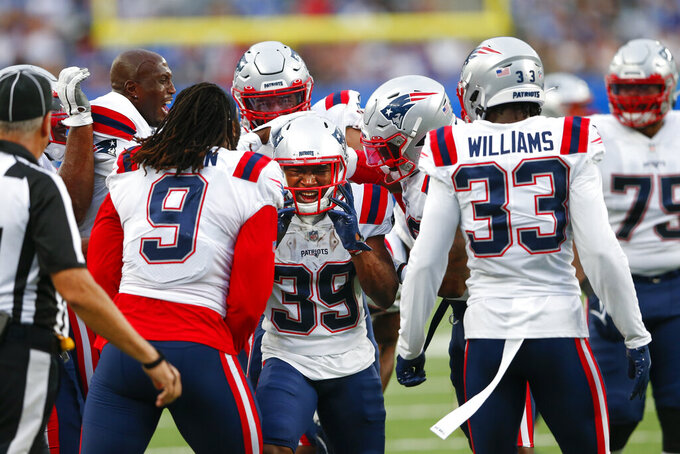 New England Patriots cornerback D'Angelo Ross (39) celebrates with teammates after intercepting a pass in the end zone during the first half of an NFL preseason football game against the New York Giants Sunday, Aug. 29, 2021, in East Rutherford, N.J. (AP Photo/Noah K. Murray) 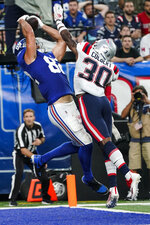 Jones, the first-round draft pick from Alabama, threw a touchdown pass and led three scoring drives as the Patriots capped a perfect preseason with a 22-20 victory over the winless New York Giants on Sunday night.

After the game, Patriots coach Bill Belichick said a decision has not been made on a starting quarterback.

“We still have a lot of decisions to make,” he said.

This one certainly won't be easy. Jones has gotten most of the action and hit 36 of 52 passes for 388 yards and a touchdown. Newton, the starter last year in the post Tom Brady era, was 14 of 21 for 162 yards, a touchdown and an interception on Sunday night.

Jones said he would be ready to play, whether as the starter or backup.

“I’ve gotten a lot of opportunities to play and I can improve on everything I want to improve on,” Jones said after leading three scoring drives. “There’s a lot of work to do, but I think I’ve made progress.”

The Giants had a chance to tie the game in the waning seconds when backup Mike Glennon threw is second touchdown of the game, a 43-yard to Damion Willis with :08 to play. A potential tying 2-point pass play from Glennon to Dante Pettis fell incomplete. There is no overtime in preseason games.

Playing most of the second and third quarters, Jones finished 10 of 14 for 156 yards, including a go-ahead 17-yard TD pass to Isaiah Zuber early in the third quarter.

Newton started for the third straight game and again saw limited action, hitting 2 of 5 passes for 10 yards. Nick Folk kicked a 41-yard field goal on his first series for the New England (3-0).

Rookie Rhamondre Stevenson scored on a 9-yard third-quarter run and Quinn Nordin added field goals of 48 and 37 yards for New England, which missed the playoffs last year for the first time since 2008.

“It's important to win in the regular season,” he said.

The Giants, who lost all three preseason games, played their starters for the first time and the results were mixed. Daniel Jones finished 17 of 22 for 135 yards, including a 23-yard TD pass to tight end Kaden Smith just before halftime for a 7-6 lead. He also threw an interception on a play from the Pats 1-yard line.

“I saw a lot of bright spots from Daniel,” said coach Joe Judge, who had his captains wear military caps to honor the 13 soldiers killed in the recent bombing in Afghanistan. “We're going to build on the things he did well and correct what he needs to improve on and work as an offense.”

However, the starting offensive line failed to open lanes for the rushing game, allowed two sacks and a lot of pressures and hits.

New York, whose defense played well and got an interception from linebacker Blake Martinez, has much work to do in the next two weeks to be ready for the season.

Golladay, Jackson and Rudolph were signed as free agents to bolster the offense and Toney was a first-round draft pick. Barkley is coming off knee surgery. The five did not play in the preseason.

The Patriots will have to make a decision on a placekicker, the 36-year-old Folk or the 23-year old Nordin. Nordin has made 6 of 8 in the preseason, missing a 54-yarder late in the game. This was Folk’s first game this preseason.

Early in the second quarter, the Giants played a tribute to former coach Jim Fassel, who coached the team from 1997-2003 and led them to a Super Bowl appearance February 2001. He died in June.

Some members of Fassel's family were in the stands watching the game.

Giants TE Evan Engram (calf) and WR Darius Slayton (ankle/foot) left in the first half. Both are starters. Judge had no update on their conditions but said the players were optimistic.

Patriots: kick off season at home against Miami on Sept. 12.

Giants: start second season under Judge at home against Denver on Sept. 12.