Jones shrugs off Giants not picking up his 5th- year option 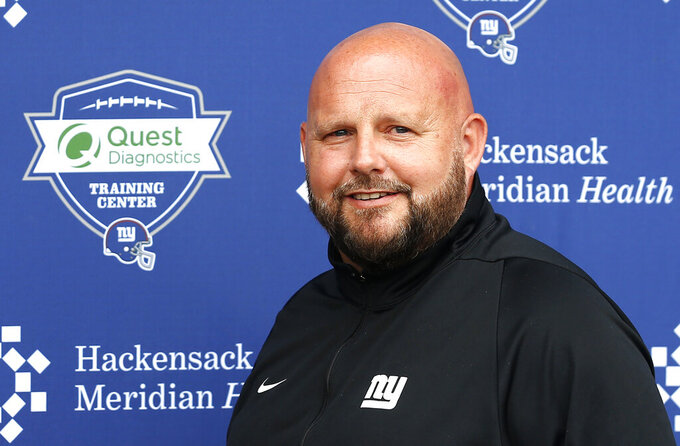 EAST RUTHERFORD, N.J. (AP) — Daniel Jones has rarely given any insight into his feelings in his three seasons as the New York Giants starting quarterback.

So it was no surprise Thursday when the No. 6 overall pick in the 2019 draft shrugged off how he felt after the Giants refused last month to pick up his fifth-year option on his rookie contract.

It would have cost the Giants and new general manager Joe Schoen $22.3 million to keep Jones under contract in 2023. It was an amount they didn't want hanging over their heads if Jones struggled again. The 24-year-old Duke product has posted a 12-25 record since becoming a starter early in his rookie season, replacing Eli Manning.

“That was certainly out of my control, out of my hands, and that’s the business part of it,” Jones said in his first interview since the option was declined. “I understand that.”

Jones also understands the Giants might be hesitant after three straight losing seasons — five overall — and his recent history of medical issues. He had a concussion at Dallas on Oct. 10 that didn't cost him to miss any games. A neck injury against Philadelphia on Nov. 28 sidelined him for the final six games.

“My job is to prepare to play as well as I can, help the team win games, and that’s certainly what I’m focused on,” Jones said after taking part in an organized team activity.

While the fifth-year option was not picked up, Jones still might have a future with the Giants.

The franchise that has made the playoffs once since winning the Super Bowl in February 2012 is once again on the rebuild. Schoen was hired to replace the fired Dave Gettleman as GM, and he hired Bills offensive coordinator Brian Daboll as the new coach. The two worked together in Buffalo.

Mike Kafka was brought in from Kansas City as the offensive coordinator. It gives Jones two of the NFL's best offensive minds. Daboll helped develop Josh Allen in Buffalo and Kafka worked with Patrick Mahomes with the Chiefs.

Jones will need to improve in what must be considered a make-or-break season.

Jones isn't worrying about that. He said he briefly thought about his future after not getting the extra season to his rookie deal, but he just wants to focus on getting better.

“I think it’s more about winning games and knowing that if we win games and we have a good season, then that should take care of a lot of things for everyone,” he said.

If Jones has a good season, the Giants could either give him a new contract or franchise him, which would pay him more than $31 million for the 2023 season, much more than the fifth-year option.

Daboll said Jones is smart, a hard worker who has picked up the offense quickly. He has told him to be aggressive, without being reckless with the football. He also is encouraging Jones to be upfront about the play calls. If he doesn't like something, say it.

“I think it’s a lot easier for him to say, ‘Hey, give me that one again tomorrow or give me that next week, let me get another rep of that or I’m just not really feeling comfortable with this play.’ Then we just throw it out," Daboll said.

Kakfa said the most pressing thing for Jones is to get comfortable in the new system. The two are spending time now working on fundamentals and techniques.

“I think Daniel is a smart guy. He’s going to work at it,” Kafka said. “You tell him one thing he’s going to spend all day thinking about it and working at it, and that’s what I appreciate.”

NOTES: It didn't take long for the Giants to find someone to wear No. 24. Less than week after cutting James Bradberry, cornerback Maurice Canady got the number. The former Raven, who played for defensive coordinator Wink Martindale, was signed Wednesday. ... Special team coordinator Thomas McGaughey is in his second stint with the Giants (2007-10) and he's working under his third Giants head coach since 2018 — Pat Shurmur and Joe Judge. The 49—year-old laughed when asked if he was the oldest guy on the staff. “It's funny, I remember being the young guy, and now they're calling me ‘OG and UNC.’” ... DE Dexter Lawrence and TE Ricky Seals-Jones were not at the workout Thursday because of family issues. .. Daboll said second-round draft pick Wan'Dale Robinson had a meeting.