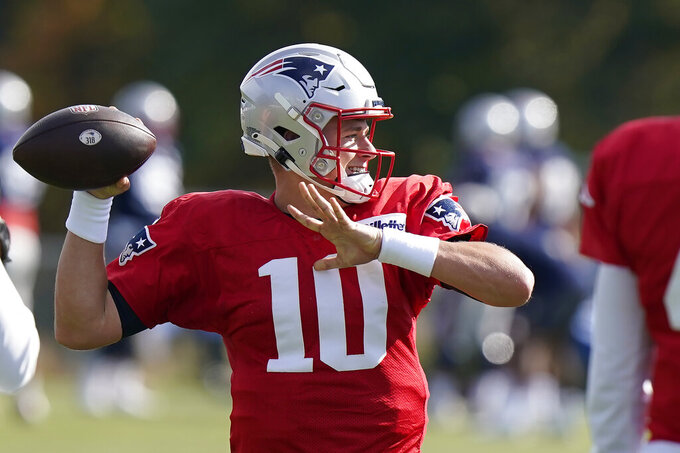 FOXBOROUGH, Mass. (AP) — Mac Jones and Zach Wilson have learned quickly this season just how difficult it is to win as rookie quarterbacks in the NFL.

With Jones under center the Patriots have yet to post a victory at home, losing three of their four games at Gillette Stadium by one score.

Wilson has shown blips of why the Jets selected him second overall in the draft. What has stood out more are nightmarish outings like his four-interception performance in New York’s 25-6 Week 2 loss against New England.

Sunday’s rematch presents an opportunity for both as they try to change the trajectory of their teams’ seasons.

“The record is the record,” Jones said. “All I can control is what I do every day. There’s a lot of good quarterbacks in this league. I can play much better than I’m playing. It just comes with reps and experience. I’m not here to compare with anybody. I just have to try to be the best player and teammate I can be.”

While the wins haven’t materialized like he wants, statistically Jones has been the most consistent rookie quarterback in the league. He leads all rookie QBs in passing yards (1,472), completion percentage (71.1) and rating (89.6).

Wilson and the Jets will be trying snap the Patriots’ 11-game win streak in the series. The Jets haven’t beaten New England since Week 16 of the 2015 season, a 26-20 win in overtime at home. New York’s last regular-season win in New England was 34-31 in overtime in 2008.

Wilson will also be trying to end a troubling trend to start his NFL career: He has thrown at least one INT in every game.

Still, Wilson believes he’s doing a good job insulating himself from outside criticism so far. Like Jones, he’s trying to focus all his energy on making incremental improvement.

“I believe I keep perspective in that I understand that every single week is just a stepping stone for what we’re trying to get,” he said. “I just need to keep learning and take some of the plays that I’m not happy with or situations in games with the right mindset, and being able to keep learning from those and getting better each and every week.”

“You see a lot of talent," Van Noy said of his fellow BYU alum. “Him understanding his players better, how to navigate through the pocket better and just everything he’s done is better.”

Though their BYU tenures were separated by four years, Van Noy has long memories of Wilson, going back to when he first met the future No 2 overall drat pick when he was just an eighth grader.

One of Van Noy’s friends who works with receivers in Utah also worked with Wilson at a 7-on-7 camp. Van Noy was there and said something immediately stood out about him.

“You knew he was gonna be special,” Van Noy said. “He’s got a cannon. … He carries just himself in a different way like, ‘He’s got it.’”

LET’S GET IT STARTED

The Jets spent their bye-week break trying to solve their slow starts.

“You know, we shoot ourselves in the foot and we don’t really give ourselves a fighting chance,” wide receiver Corey Davis said. “So we start with that, we’ve got a better chance, for sure.”

“We understand that we’ve been starting slow,” he said. “But you know, we’ve got to take this thing one day at a time and one play at a time.”

The Jets have yet to intercept a pass, the only NFL team to not pick off the opposing quarterback at least once. New York has come close a few times.

Actually, it’s something the Jets have never seen. Dating to last season, they have gone a franchise-record seven games without an interception.

“It’s not for lack of trying or lack of effort there,” Rankins said. “I just think it’s kind of the way that the balls roll.”