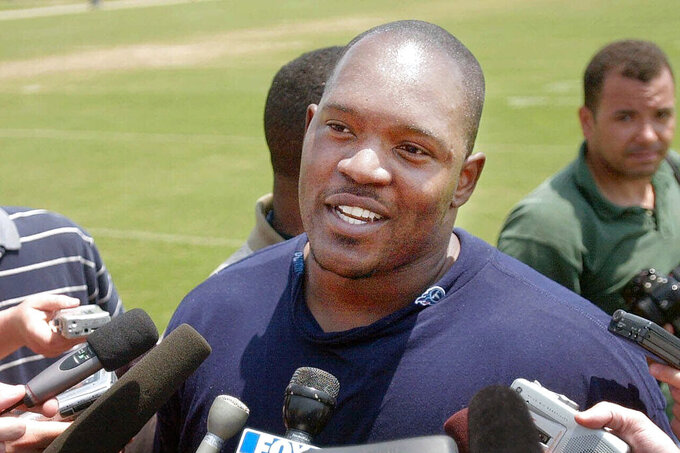 FILE - In this May 17, 2001, file photo, Tennessee Titans' Josh Evans, center, talks with reporters after practice at the Titans training facility in Nashville, Tenn. Josh Evans, a defensive tackle who started for the Tennessee Titans in the 2000 Super Bowl, has died. Evans was 48. Evans died on Thursday night, Feb. 4, 2021, in Fayetteville, Georgia, one year after he was diagnosed with kidney cancer. (AP Photo/John Russell, FIle)

ATLANTA (AP) — Josh Evans, a defensive tackle who started for the Tennessee Titans in the 2000 Super Bowl, has died. Evans was 48.

Evans died Thursday night in Fayetteville, Georgia, one year after he was diagnosed with kidney cancer. His death was confirmed to The Associated Press by Willie Watkins Funeral Home in Riverdale, Georgia, which is handling arrangements.

Evans, a native of Langdale, Alabama, retired in 2005 following a nine-year career, including six seasons with the Houston Oilers and Tennessee Titans. He played his final three seasons with the New York Jets.

“His fight against cancer was one of courage and strength and his teammates were by his side encouraging him throughout that fight,” Titans controlling owner Amy Adams Strunk in a statement released by the team. “We will remember his big personality and even bigger smile.”

Evans sacked Jacksonville quarterback Mark Brunell for a safety in the 33-14 AFC title game victory over the Jaguars.

Evans set a career high with six sacks for the Jets in 2002.

While with the Jets, Evans was suspended indefinitely by the NFL in 2003 for violating the league's substance-abuse policy for a third time. He missed the first four games in 1999 with Tennessee following his first violation and was suspended for the entire 2000 season.

The Titans honored Evans as the 12th Titan in their game against Houston on Oct. 18, 2020.

He made the Oilers as an undrafted rookie from UAB in 1995. He was named to the UAB Athletics Hall of Fame in 2020.