Josh Gordon on track for debut with Seahawks 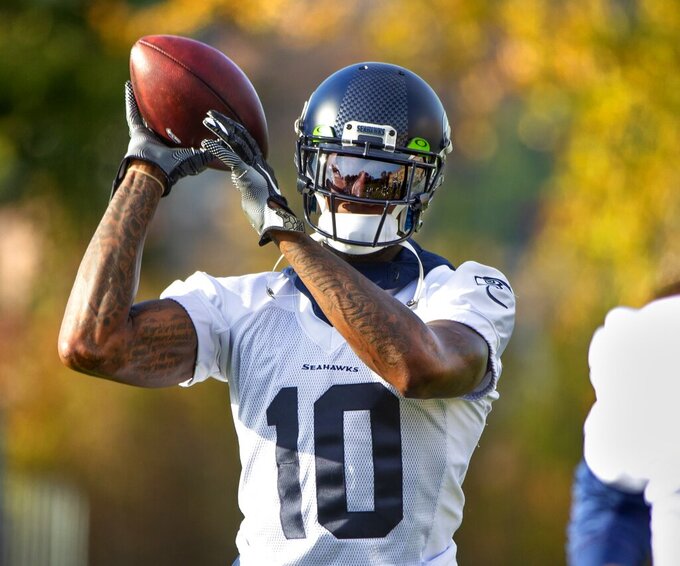 RENTON, Wash. (AP) — Josh Gordon didn't know where he'd land following his release from the New England Patriots last week. He did have one place in particular he wanted to end up.

Gordon said Friday that he hoped he'd have a chance to play with Russell Wilson and that the two of them had long discussed the idea of playing together some day.

"Me and Russ have been talking about it for a little while behind the scenes how nice it would be but here I am," Gordon said. "I admire his game. I think maybe he respected mine mutually. I love the way he plays. It's as simple as that. He's just a great ball player. He can make it happen from pretty much anywhere."

Gordon and Wilson have known each other for close to five years and have routinely kept in touch with each other. They often talked about football and what it would be like if they ever had a chance to suit up together in the NFL.

"I guess we just kind of kept tabs on each other from time to time and then just mutually admiring each other's game and saying what's up," Gordon said. "That's about it. We always talked football and I think we built some type of relationship prior to me getting here so pretty nice to have that."

Gordon was released from a brief stint on the Patriots' injured reserve last a week ago. With the trade deadline having passed, Gordon was subject to the league's waiver process instead of becoming an outright free agent. Seattle sat 28th in the waiver order and 27 other teams had to forego placing a claim on Gordon for the Seahawks to get him on their roster.

Now with a full week of practice in Seattle, Gordon could make his debut in a key NFC West matchup Monday night against the San Francisco 49ers.

"He did really well,"coach Pete Carroll said. "He was very impressive in terms of picking stuff up, studying overtime. He fit in really well. He's a really good athlete. You can really tell that he's got a lot of potential to be a big-time player. It was fun seeing him on the practice field. Did a nice job."

Teammates such as cornerback Jamar Taylor, Mychal Kendricks and Jacob Hollister, who had played with Gordon during his stops in Cleveland and New England, spoke highly of Gordon. Despite his numerous off-field issues, they collectively called him a great teammate and a hard worker.

"He's been great since he's gotten here," Wilson said. "He's been studying like crazy. He sits up (front) and takes tons of notes. He's highlighting like crazy. He's in his playbook non-stop. He's prepared. He'll be prepared and ready to roll. He's a true pro. He's been in different systems and stuff like that. I think that helps him. I think he's really fired up to be here. We're fired up to have him. We're looking forward to how he plays on Sunday."

Carroll didn't fully commit to Gordon playing against the 49ers but said there's "a good chance" it happens.

"I'm grateful to be here," Gordon said. "A lot of gratitude, definitely thankful to land in a spot like this. It could have been anywhere. I couldn't control that but nonetheless I'm grateful to have this opportunity to go out there and do what I do."

Notes: S Lano Hill (elbow) and G Phil Haynes (ankle) are questionable. ... S Quandre Diggs is set to make his Seattle debut after missing his first two games with the team due to a hamstring injury that lingered from before his trade from Detroit. ... TE Ed Dickson could still be added to the active roster prior to Monday's game. He's spent the first nine weeks on injured reserve following knee surgery in August.