Judge orders Kraft massage video not be released for now 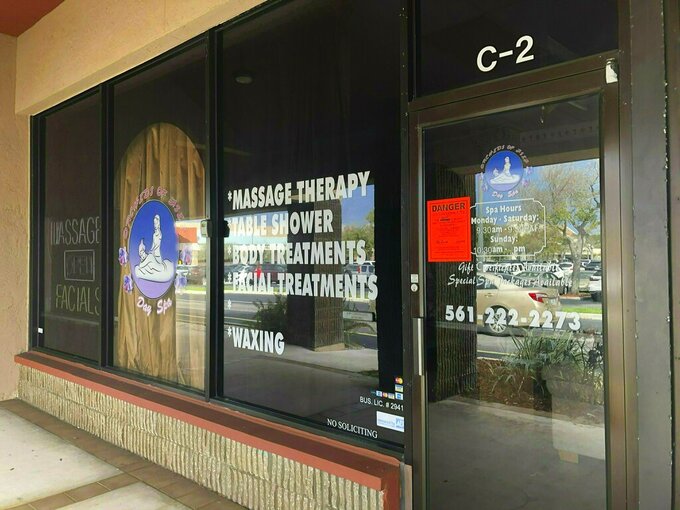 FILE- This Feb. 19, 2019, file photo, shows the Orchids of Asia Day Spa in Jupiter, Fla. Nearly three dozen men and women have filed a federal class-action lawsuit accusing Florida authorities of unlawfully videotaping them as they received legal massages at a parlor where New England Patriots owner Robert Kraft and others allegedly paid for sex. The lawsuit by 31 John and Jane Does alleges that Palm Beach County State Attorney Dave Aronberg, the Jupiter Police Department and the case's lead detective violated their rights to privacy when they were videotaped in January receiving massages at the Orchids of Asia Day Spa. The lawsuit was originally filed Friday, April 19, 2019, with 17 accusers. (Hannah Morse/Palm Beach Post via AP, File)

WEST PALM BEACH, Fla. (AP) — A video that police say shows New England Patriots owner Robert Kraft paying a massage parlor worker for sex should not be publicly released for now because it would ruin his chance for a fair trial, a judge ruled Tuesday.

Circuit Judge Leonard Hanser accepted arguments by Kraft's attorneys that releasing the video would likely make it impossible to seat a jury for his trial on misdemeanor prostitution charges. He said the video shouldn't be handed to the news media as a public record until a jury is seated, a plea agreement is reached or the state drops the case. Kraft has pleaded not guilty but has issued an apology for his conduct.

Hanser wrote that under normal circumstances, an older man allegedly paying for sexual services would be "a rather tawdry but fairly unremarkable event."

"But if that man is the owner of the most successful franchise in, arguably, the most popular professional sport in the United States, an entirely different dynamic arises," Hanser wrote. He said the video would be shown widely on television and on the internet and it would be difficult for him to find unbiased jurors. The Associated Press is one of several media companies that have argued that a redacted version of the video should be released under Florida's broad public records laws.

Kraft was one of 25 men charged with solicitation after police secretly installed cameras at the Orchids of Asia massage parlor in Jupiter, Florida, in what authorities initially said was an investigation into human trafficking. Prosecutors have since said they found no evidence of trafficking at the spa.

Police say the video shows Kraft and other customers engaged in sexual acts with spa masseuses. Separately, Kraft's attorneys are seeking to suppress the video on grounds that it is an invasion of privacy and that the search warrant to install the cameras was obtained using untrue statements indicating that authorities had found potential evidence of human trafficking. A hearing on that motion is scheduled for Friday.

At a hearing later Tuesday, attorneys for spa owner Hua Zhang and therapist Lei Wang received permission from Circuit Judge Joseph Marx to subpoena a celebrity gossip website that says it was approached last week by someone offering to sell it the Kraft video. Marx told attorneys Kathleen S. Phang and Tama Beth Kudman that they could subpoena TheBlast.com and its phone provider to try to determine who contacted them.

The Los Angeles-based website reported last week that it did not buy the video, but that the would-be leaker showed its employees a snippet. One of Kraft's attorneys, Alex Spiro, testified that the website's CEO and lawyer described to him what the alleged leaker showed and he believes it matches the video police have shown him. The website did not respond to an email seeking comment and the video has not shown up elsewhere.

Phang and Kudman argued that someone at the Palm Beach County State Attorney's Office or Jupiter police must be the leaker. Both agencies denied that, and Marx said Phang and Kudman haven't proved the leak is real. He did order both agencies to hand over a list by Monday of all employees who have access to the video.

Zhang and Wang have pleaded not guilty to felony prostitution charges.