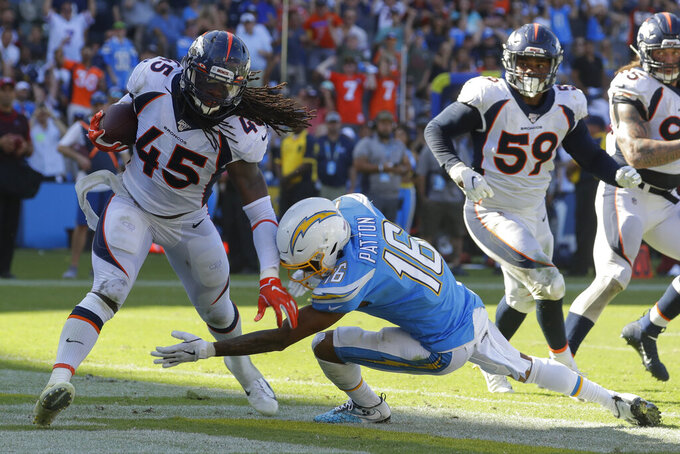 Denver Broncos linebacker A.J. Johnson, left, is tackled by Los Angeles Chargers wide receiver Andre Patton after an interception in the end zone during the second half of an NFL football game Sunday, Oct. 6, 2019, in Carson, Calif. (AP Photo/Alex Gallardo)

"We waited a little longer than we wanted to, but a hell of a win," general manager John Elway said as he presented his almost-sheepish 61-year-old rookie head coach with a game ball in Denver's delirious locker room in Los Angeles.

It's no surprise the unpretentious sexagenarian didn't keep the keepsake of the 20-13 win over the Chargers.

The Broncos (1-4) ended an eight-game skid along with their takeaway drought as they rallied around the loss of star defender Bradley Chubb (ACL) to put an end to their winless ways.

Jackson's return from a sore hamstring settled the secondary and he provided the play of the game when he hammered Austin Ekeler and forced him to fumble while trying to reach the pylon on fourth-and-goal from the 1 as the first half expired, allowing Denver to take a 17-0 lead into the locker room.

"Those are the types of plays we had envisioned when we brought Kareem in here to play safety," Fangio said.

Filling in for Josey Jewell (hamstring), Johnson and had nine tackles, two pass breakups and an end zone interception in his first start since Nov. 15, 2014, for Tennessee vs. Kentucky.

"I'm not surprised by his play," Von Miller said. "He has the size, he has the speed and he's smart."

Defensive changes. Fangio said Purcell and Johnson both earned another start next week against Tennessee. "They both played well enough to continue," said Fangio.

OC Rich Scangarello's play-calling and the Broncos' offensive execution coming out of halftime. In their last two games, outside of a 15-yard penalty, the Broncos have gained just 24 yards and one first down in six third-quarter drives. They blew a 17-6 halftime lead against Jacksonville and their defense kept them from blowing a 17-0 halftime lead at LA. Fangio said the key is staying out of third-and-long situations.

Johnson, although Fangio said he needs to keep cleaning things up to stay on the upswing. He fixed flaws on special teams but his first start was more the result of Jewell's lingering hamstring injury than his improvement. "He's a young guy who needs to master his craft a little bit better," Fangio said. "But I always knew he was going to get in there somehow, some way, because he does have talent."

CB Isaac Yiadom has taken up LT Garett Bolles' penchant for penalties accompanied by indignation when flagged. He's looking like a poor fit in Fangio's zone scheme. Also, PR Diontae Spencer fielded a punt inside his own 5 for the second straight week. "He's not doing what he's been coached to do there," Fangio said.

CB De'Vante Bausby (cervical spine) will "definitely miss some time. I don't know if it will be the rest of the season or not," Fangio said. Rookie LB Justin Hollins (knee) is day-to-day, and RT Ja'Wuan James (knee), sidelined since the opener, is expected to return to the lineup against the Titans if all goes well at practice this week.

12 — the number of penalties the Broncos racked up, costing them a whopping 122 yards. Five penalties were on offense, six on defense and one on special teams. The Chargers were flagged four times for 43 yards.