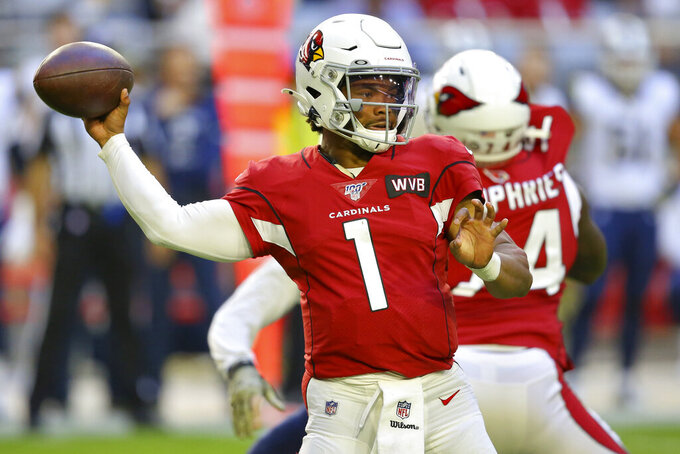 The salary cap, rookie wage scale and migration of strategies from the college to the professional game have placed more of a premium than ever on playing rookies in the NFL.

The days of sitting on the bench or having limited roles while learning from trusted veterans is long gone. Players are thrown right into the thick of the action.

Even an old-time coach like Oakland's Jon Gruden adapted. After relying heavily on veterans like Jerry Rice, Rich Gannon and Eric Allen to fortify an already experienced roster in his first stint as coach of the Raiders, Gruden has turned to the youngsters to help rebuild a struggling team.

Thanks to having three first-round picks last year because of trades that sent away established stars Khalil Mack and Amari Cooper, the Raiders have gotten more touchdowns (14), sacks (11), yards rushing (1,079) and receptions (82) than any other class of rookies this season. That's thanks in large part to strong performances from first-round running back Josh Jacobs and fourth-round defensive end Maxx Crosby.

"I think the way the salary cap is now I think has a lot to do with that," Gruden said. "You get four or five years into your career, you get into that second contract, you can't have everybody making that amount of money in this salary cap era.

“It's a combination of everybody in high school, college and pro kind of merging toward the spread type of football."

The Raiders are far from alone in getting significant production from the rookie class, with No. 1 overall pick Kyler Murray looking like an emerging star quarterback in Arizona; Nick Bosa and Josh Allen developing into elite pass-rushing threats; and several receivers showing off big-play ability, like D.K. Metcalf in Seattle and Terry McLaurin in Washington.

Here's a deeper look into the 2019 rookie class:

Murray went to Arizona with the top pick a year after the Cardinals used a first-rounder on Josh Rosen — and has lived up to the billing. Murray has thrown for 2,866 yards while starting every game, has thrown for 14 TDs compared to only six interceptions, and has rushed for 446 yards and four scores. He has sparked an offense that struggled to do anything last year and has drawn lofty comparisons already to more established quarterbacks such as Russell Wilson.

"He's good for a rookie," 49ers defensive lineman Arik Armstead said. "The guy is talented. He's just like Russ back there. He's a Houdini back there making guys miss, trying to extend plays downfield."

Murray was one of three first-round quarterbacks, along with Daniel Jones of the Giants and Washington's Dwayne Haskins. Jones, the sixth overall pick, took over as starter in Week 3 and has shown some flashes but struggled with ball security. His 10 lost fumbles are the most in the NFL in 16 years, and his 21 turnovers in all are second worst this season.

Jones is now out with a sprained ankle.

Haskins waited until Week 9 to take over as starter after being drafted 15th overall, and his 54.1% completion rate is second worst among all QBs with at least 100 attempts.

The second-most productive rookie QB has been sixth-round pick Gardner Minshew, who won four of eight games as starter in Jacksonville. His 91.1 passer rating is the best for a rookie through 13 weeks since Dak Prescott in 2016. This week, he recaptured the job from pricey free-agent signee Nick Foles.

Even undrafted players — Pittsburgh's Devlin Hodges and Detroit's David Blough — have gotten a chance. Hodges has taken over as starter in Pittsburgh and has the Steelers in position for a wild-card spot.

BEST OF THE REST

Several other first-round picks look like they have star potential, mostly on the defensive line. Bosa is a top contender for defensive rookie honors as one of the key's to San Francisco's dominant defense with eight sacks and an interception.

Allen went to Jacksonville at No. 7 and leads all rookies with nine sacks as one of the bright spots in a disappointing season for the Jaguars.

A couple of interior linemen also have fared well early, with 17th pick Dexter Lawrence of the Giants anchoring the middle of New York's defense, and Jeffrey Simmons becoming a great value in Tennessee after slipping to No. 19 after he tore his right ACL in February. Simmons' return Oct. 20 helped spark the Titans' recent turnaround.

While 12 games into the season is too early to call anyone a bust, a few first-round picks have failed to live up expectations.

The Raiders used the No. 4 overall pick on defensive lineman Clelin Ferrell, who has not made much of an impact outside of a 2 1/2-sack game against the Chargers last month.

He's fared much better than No. 29 pick L.J. Collier of Seattle. The defensive lineman has yet to have a quarterback pressure, according to Pro Football Focus, and was scratched last week.

Receiver N'Keal Harry was picked by New England with the final selection of the first round and began the season on the injured list. He has four catches and two drops in three games and ran a poor pattern on his only target last week, leading to an interception.

Teams loaded up on skill position players on the second day of the draft, spending 25 picks in Rounds 2 and 3 on players who handle the ball. Many of those choices have turned out well, with several key contributors on playoff contenders.

One of the most productive has been Buffalo third-round running back Devin Singletary, whose potential shown in training camp led to the release of LeSean McCoy, now with Kansas City. Singletary opened the season as a starter and has rushed for 553 yards, including his first 100-yard game two weeks ago against Denver.

Several teams in the playoff hunt can thank rookie receivers from Day 2 of the draft for their success. Metcalf leads all rookies with 705 yards receiving, San Francisco's Deebo Samuel has 337 yards receiving and two TDs the past four games, Tennessee's A.J. Brown leads the team with 626 yards receiving, and Kansas City's Mecole Hardman has added another speed threat to Kansas City's offense.

McLaurin has been a rare success story in a down season in Washington.

Teams have also gotten production out of some overlooked players who lasted until the third day of the draft or beyond.

Crosby has outplayed the more highly regarded Ferrell in Oakland despite lasting until the fourth round, and his 7 1/2 sacks are third most among all rookies.

Fifth-round receiver Darius Slayton of the Giants has 37 catches for 505 yards and five TDs.

Even undrafted receiver Preston Williams of Miami has become a regular contributor who has shown the skills to last in the NFL.