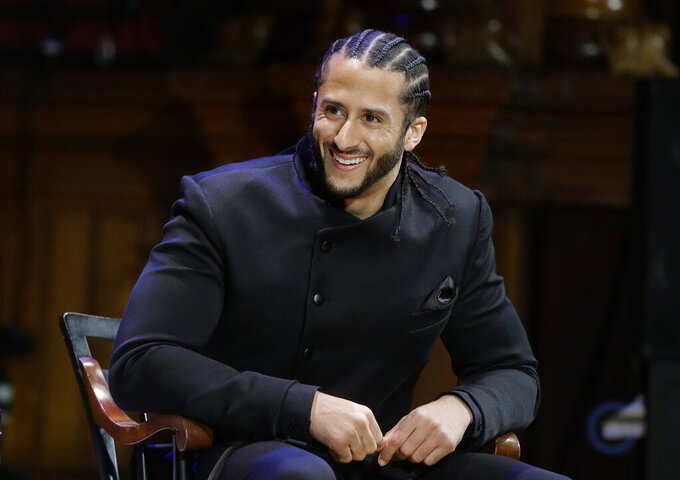 Colin Kaepernick has to audition for a job in a workout strangely organized by the NFL while other quarterbacks with lesser talent were given opportunities over the past three years.

Of course, the reason Kaepernick hasn't played in a game since New Year's Day 2017 goes beyond football.

Kaepernick has been exiled since becoming a free agent months after he began kneeling during the national anthem before games in 2016 to protest social and racial injustice. He drew strong criticism from President Donald Trump and many others for his peaceful demonstration, and eventually sued the league for colluding to keep him out.

The NFL in February settled the collusion grievance Kaepernick and former teammate Eric Reid had filed. Reid now plays for the Carolina Panthers.

Meanwhile, plenty of mediocre quarterbacks have earned paychecks in the league during Kaepernick's absence.

Luke Falk started two games this season for the New York Jets and then got cut. Devlin Hodges started a game for the Pittsburgh Steelers. Brandon Allen is currently starting for the Denver Broncos.

At his best, Kaepernick was a Pro Bowl-caliber player who led the San Francisco 49ers to consecutive NFC championship games in 2012-2013. He was 4-2 in the playoffs and came within 5 yards — and possibly a missed passed interference penalty — of winning a Super Bowl.

At his worst, he was benched for Blaine Gabbert after eight starts in 2015, but he needed surgeries on his right thumb, left shoulder and left knee after that season.

Kaepernick threw 16 TD passes and only four interceptions and ran for 468 yards in his last season for a 2-14 team that lacked talent around him.

"He's been out of the game a little bit, but when he was doing well and playing he definitely was a weapon," Bears coach Matt Nagy said this week.

Many have expressed skepticism about the league's out-of-the-blue, take-it-or-leave-it tryout offer. The NFL gave Kaepernick a 2-hour deadline to accept the offer on Tuesday, according to a person familiar with the bizarre arrangement. The league denied Kaepernick's request to hold the workout on a different day that would give general managers and head coaches a chance to be present.

The 32-year-old Kaepernick is in Atlanta, anyway. He's determined to showcase his skills in front of anyone willing to watch.

Perhaps the league thought Kaepernick wouldn't show up because of the stumbling blocks and the appearance that this is merely a public relations stunt. Those close to Kaepernick believe it's a "farce" and a "charade," but he's going along with it because it's the best chance he has to get in front of league personnel. Kaepernick has been diligently preparing to play, working out with trainers early in the morning five days a week.

Some have speculated that Jay-Z helped orchestrate this tryout. But Kaepernick's camp believes those reports are not accurate. If they are, it looks worse for Jay-Z.

Even those who have criticized Kaepernick in the past or been at odds with him over other issues agree the league has handled this event poorly.

"I really hope it's a serious shot for him to get back in the league, as I think he deserves to be in the league, and for the last three years has unjustly not had a job," Philadelphia Eagles safety Malcolm Jenkins said. "But based on all the things that have led us to this point, it leaves me a little skeptical of the motivations behind it. But I think like anybody, we're just kind of all waiting to see."

The NFL said Thursday representatives from at least 11 teams have committed to attend the workout and more are expected. The league also plans to send video of the workout and interview to all 32 of its teams, including head coaches and general managers.

If the tryout is legitimate, here are 10 teams that could sign him:

PATRIOTS: Bill Belichick doesn't care about public perception, only wins. Tom Brady is 42 and doesn't have a contract for 2020 and rookie fourth-round pick Jarrett Stidham is the backup. The only obstacle is Trump's relationship with owner Robert Kraft.

BEARS: Mitchell Trubisky has regressed a year after the Bears went 12-4. Nagy could take Kaepernick to another level the way his coaching mentor, Andy Reid, did with Michael Vick in 2010 in Philadelphia.

SAINTS: Drew Brees and Teddy Bridgewater will be free agents after the season. Coach Sean Payton likes using Taysom Hill in a variety of ways. He could get innovative with Kaepernick.

RAVENS: Before Lamar Jackson was doing his thing in Baltimore, Kaepernick did it first. The Ravens considered signing Kaepernick in the summer of 2017 to back up Joe Flacco. Owner Steve Bisciotti said he consulted with fans and the team ultimately passed.

SEAHAWKS: They were the only team to bring Kaepernick in for a visit a couple of years ago, but coach Pete Carroll said he should be a starter in the league and that he only wanted a backup for Russell Wilson. Geno Smith currently has that job. Kaepernick is an upgrade.

BRONCOS: John Elway was interested in Kaepernick after Peyton Manning retired following the 2015 season but couldn't agree to a trade with the 49ers to get him. The Broncos have used six different starting quarterbacks in the past three-plus seasons. They signed Flacco and drafted Drew Lock in the second round this year. Both players are injured.

STEELERS: They didn't reach out to Kaepernick after injuries to Ben Roethlisberger and Mason Rudolph, but things could change after Rudolph tossed four picks Thursday night.