Kaepernick reaches out to Seahawks, Carroll about NFL chance 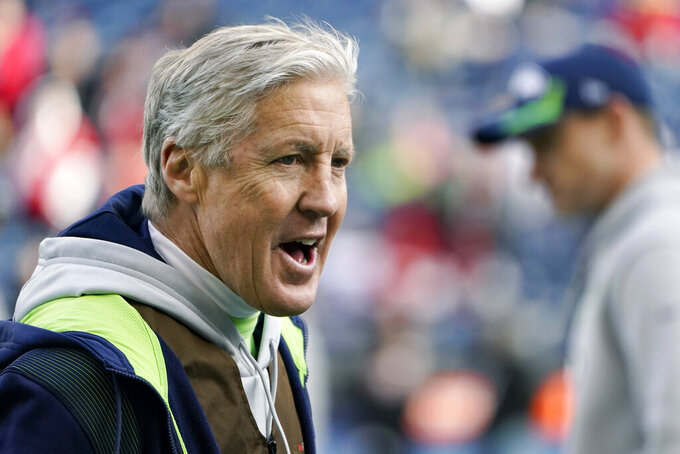 FILE -Seattle Seahawks head coach Pete Carroll walks on the field during warmups before an NFL football game against the San Francisco 49ers, Sunday, Dec. 5, 2021, in Seattle. Seattle Seahawks coach Pete Carroll said Wednesday, March 16, 2022 he recently spoke with Colin Kaepernick, who expressed an interest in another chance to be a quarterback in the NFL. (AP Photo/Elaine Thompson, File)

Seattle Seahawks coach Pete Carroll said Wednesday he recently spoke with Colin Kaepernick, who expressed an interest in another chance to be a quarterback in the NFL.

Carroll cautioned that if Kaepernick gets that opportunity it may not be in Seattle, but said, “I think he does somewhere.”

But he made a point to specifically mention his recent contact with Kaepernick, who led the San Francisco 49ers to a Super Bowl appearance following the 2012 season. Kaepernick last played in the NFL in 2016, the same year he started kneeling during the national anthem to protest racial injustice.

Kaepernick had recently posted on social media looking for wide receivers to throw with. Seattle wide receiver Tyler Lockett took Kaepernick up on his offer and caught passes from the quarterback earlier this week.

“He contacted me the other day and said, ‘Hey, I’d like to get a shot. I’m working out,’” Carroll said. “And so he sent me some video and next thing I know he’s working out with with Tyler Lockett. I don’t know how that happened.”

Kaepernick met with Seattle a few years ago, but Carroll said he should be a starter in the league and the Seahawks only wanted a backup for Wilson.

The Ravens considered signing Kaepernick in the summer of 2017 when former starting quarterback Joe Flacco was dealing with a back injury that would keep him out for the entire preseason. Owner Steve Bisciotti said he consulted with fans and the team ultimately passed.

The NFL organized a workout for Kaepernick in Atlanta in November 2019, but it turned chaotic and resulted in no job offers.

When Kaepernick took a knee to take a stand against police brutality and racial injustice in 2016, he was mostly alone. Teammate Eric Reid and a few others joined him, but politicians, team owners and other players criticized him, fans burned his jersey, and he was booed even at home. By 2020, global opinion shifted to the point that more people began vilifying those who attacked Kaepernick or misrepresented his stance.

Kaepernick and Reid filed collusion grievances against the league in October 2017, saying they were blacklisted because of protests during the anthem at games. They reached a settlement in 2019.

Carroll was asked directly how realistic it is that Seattle would give Kaepernick a look. Drew Lock was acquired in the trade with Denver.

“I don’t know, but he’s making a remarkable bid for it to sustain his conditioning for the four years he’s been out, going on five,” Carroll said. “Who knows? I don’t know. We’ll see.”