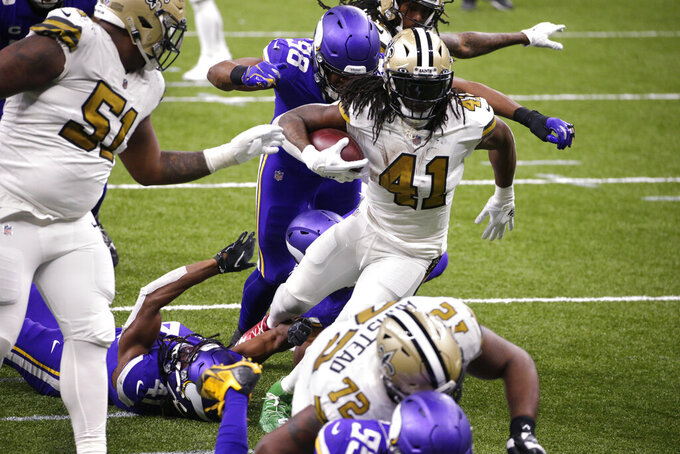 New Orleans Saints running back Alvin Kamara (41) carries for his fifth touchdown of the game, in the second half of an NFL football game against the Minnesota Vikings54 in New Orleans, Friday, Dec. 25, 2020. (AP Photo/Butch Dill)

NEW ORLEANS (AP) — The New Orleans Saints have placed running back Alvin Kamara, who leads the club in both yards rushing and receiving, on their COVID-19 reserve list.

The move means Kamara is unavailable for Sunday's regular-season finale at Carolina and also could miss the Saints' first playoff game if New Orleans is unable to move up to the NFC's top seed.

Kamara has 932 yards and 16 TDs rushing to go with 756 yards and five TDs receiving this season. His touchdowns rushing and 21 total touchdowns from scrimmage are Saints single-season records.

The transaction also comes less than a week after Kamara ran for six touchdowns and and a career-high 155 yards in a victory over Minnesota, tying an NFL record for TDs rushing in a game set by Ernie Nevers in 1929. Hall of Fame Chicago Bears running back Gale Sayers is the only other player to score six TDs in a game overall, but did so with four on the ground, one receiving and one on a punt return.

The NFL introduced a COVID-19 reserve list this season for players who either test positive for the coronavirus or are known to have been exposed to someone who has contracted the virus.

With Kamara out, Latavius Murray is a likely candidate to get the bulk of carries for New Orleans on Sunday.

Murray has 656 yards and four TDs rushing this season and in 2019 had 100-yard rushing performances in both games Kamara missed with leg injuries.

To capture the NFC’s top playoff seed, the Saints would need to beat Carolina and also would need Chicago to beat Green Bay and Seattle to beat San Francisco.