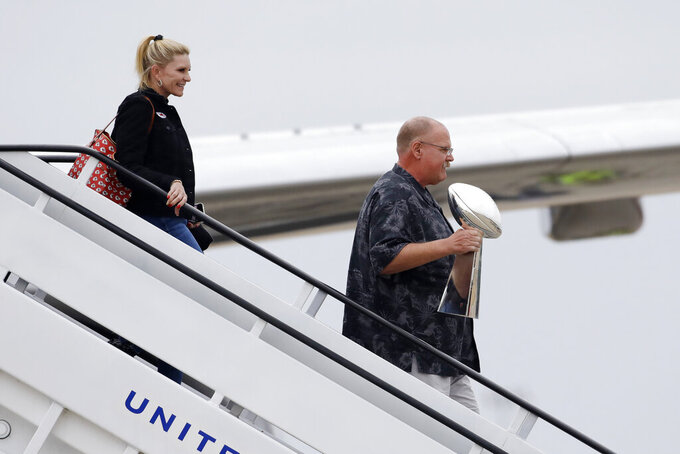 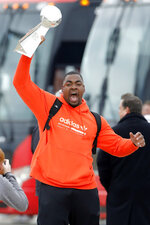 Coach Andy Reid, carrying the Super Bowl trophy, led the team off its plane Monday afternoon before they boarded a bus caravan to return to Arrowhead Stadium. Fans were discouraged from meeting the Chiefs at the airport. Quarterback Patrick Mahomes was not with his teammates because he flew to Disney World in Orlando, Florida, to lead a Super Bowl celebration parade as part of his duties as MVP.

A parade through downtown Kansas City, Missouri, is set for 11:30 a.m. Wednesday, followed by a rally at Union Station. Several schools in the area canceled Wednesday's classes, and the Kansas Legislature canceled that day's session. Officials announced the celebration Sunday night, shortly after the Chiefs defeated San Francisco 31-20.

The celebration started before the game, with an estimated 20,000 people showing up at the Power & Light District in downtown Kansas City to watch the Super Bowl on a massive screen. Police said Monday 14 people were arrested and 45 were ejected from the entertainment district, and fire officials responded to 24 medical incidents. The Westport entertainment district also was packed and police reported several disturbances, but none were serious.

One man died when he tried to light commercial-grade fireworks in an improvised mortar and one of them exploded shortly after the game ended, police said in a statement. No other information was released.

Officers also will be following up on 163 reports of celebratory gunfire from 5:30 p.m. Sunday to early Monday, police said.

A newly installed sign inside Union Station proclaimed the Chiefs “World Champions!" Among those lining up to take a picture Monday were Mark and Karie Teetor, of the St. Louis area, who described a scene of pandemonium and dancing as they watched the game with friends.

“I was crying pretty much," Karie Teetor said.

Her husband said he was just happy to see the Chiefs in the Super Bowl after a 50-year drought.

“To win is icing on the cake," he added.

The city installed generators and a temporary cellphone tower near the site of the rally, while area businesses made plans to close or operate on a reduced schedule.

At Children's Mercy Kansas City, the emergency room at the main downtown campus will be open , but appointments and some surgeries were being rescheduled or moved.

When the Royals won the World Series in 2015, an estimated 800,000 people flocked to the victory parade, shattering expectations in a city with a population of about 470,000 and a metropolitan area of about 2 million. Cellphone towers were overwhelmed by the throngs, and buses couldn't get through.

City spokesman Chris Hernandez offered no specifics on the expected crowd size for the Chiefs' celebration, saying only that “we are prepared for a massive crowd of fans wearing red and celebrating a Super Bowl victory that’s been 50 years in the making. So please dress warmly and come downtown to enjoy a family-friendly celebration."

Christie Bernard, 45, of the St. Louis suburb of St. Peters, brought her 12- and 19-year-old sons to Union Station for a picture Monday. She said her husband — a “huge, huge Chiefs fan” — died unexpectedly a few months ago.

“We wished he could have seen it. But we feel like he helped them out a little bit last night. We kind of feel like that fourth quarter, he knew that they needed some help, so he gave them a little boost," she said of the Chiefs' come-from-behind win.