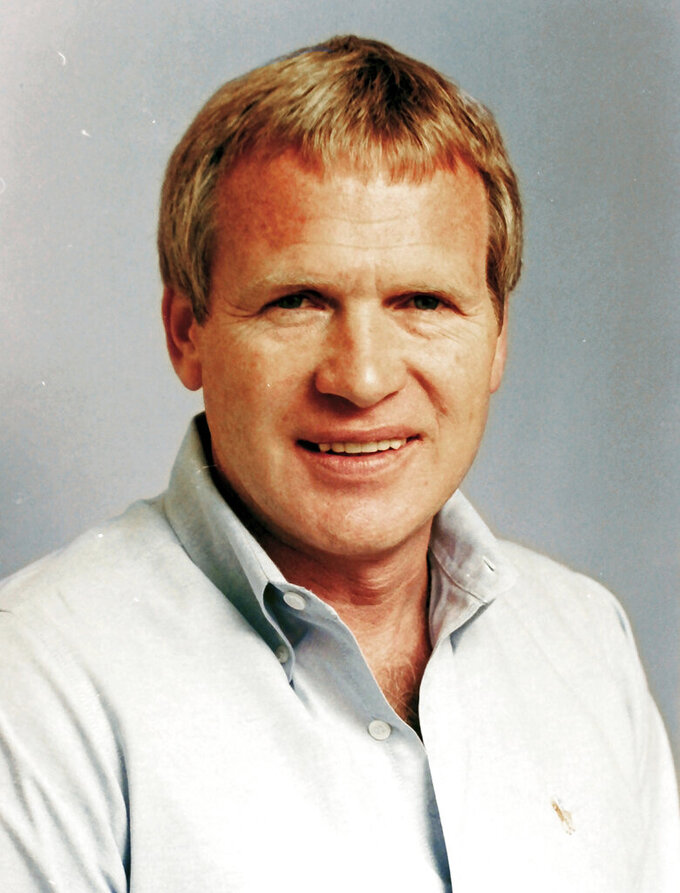 This undated photo shows Associated Press sports writer Ken Peters while at the AP bureau in Los Angeles. Peters, who covered multiple Olympics and other major events during a nearly 35-year career as a sports writer for AP, has died. He was 77. His wife, Cathy, said Peters died Sunday, Feb. 23, 2020, in the Los Angeles suburb of Chino Hills after a long illness. (AP Photo)

LOS ANGELES (AP) — Ken Peters, who covered multiple Olympics and other major events during a nearly 35-year career as a sports writer for The Associated Press, has died. He was 77.

His wife, Cathy, said Peters died Sunday in the Los Angeles suburb of Chino Hills after a long illness.

During his AP career, Peters covered several Super Bowls, Pro Bowls and World Series; championship fights in Las Vegas; football at Southern California and UCLA, in addition to the NFL's Rams during their first stint in Los Angeles; and hockey, basketball, golf, tennis and track and field. He also wrote extensively about the Raiders' battle with the NFL over rights to the Los Angeles market.

Peters willingly jumped in to help on non-sports breaking news.

“He was an extremely great guy,” longtime AP co-worker John Antczak said. “He was extraordinarily calm and collected during adverse situations.”

Born in Ringgold, Georgia, Peters graduated with a journalism degree from the University of Georgia. “He said the prettiest girls majored in journalism and that's how he chose journalism,” his wife said.

After college, Peters had a four-year stint as a public information officer in the Air Force, based in Tucson, Arizona.

Upon leaving the military, Peters visited a brother who lived in Southern California, and soon decided to apply for journalism jobs in the region. He was hired at the San Gabriel Valley Tribune, where he worked as sports editor for a few years. He then joined The AP's Los Angeles bureau and served as sports editor for much of his time.

“We were opposites in different ways; I was hyper and he was mellow. He never seemed rattled at major events,” Nadel said. “He was truly one of the most important people in my life and one of the kindest people I've ever known. I loved him like a brother.”

Peters had celebrated his birthday on Feb. 1 and his 47th wedding anniversary on Feb. 17. Peters met his wife when he went through her checkout lane at a grocery store in California. They married five months later.

“He was such a free spirit," Cathy Peters said.

Peters retired from The AP in 2009, allowing him to pursue his love of travel full-time, sometimes solo and other times with his family. He spent his 70th birthday atop a camel in Egypt and visited various Asian countries over the years. He also volunteered as an English tutor.

Besides his wife, he is survived by son Justin, daughters Tara Contreras-Peters and Ashley, as well as a granddaughter.

A memorial will be held later.