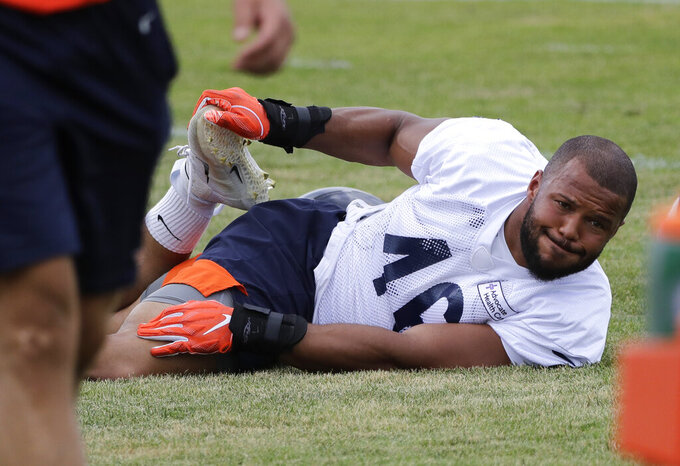 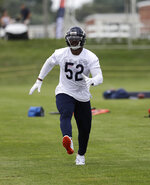 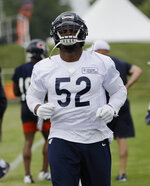 BOURBONNAIS, Ill. (AP) — Almost a year ago linebacker Khalil Mack watched and read what people said about his contract situation with fascination.

Much has changed since then, like his teammates, the money and now where he has to sleep.

It's another season, another new experience for Mack as he gets used to dormitory life again in his first Bourbonnais camp with the Chicago Bears. He's sleeping in a bed possibly a degree or two above the floor in comfort level, and trying to find his way in a revamped defensive scheme after he transformed the Bears' defense into a league-leading group.

"They told me I'm going to love it," Mack said of Bourbonnais. "I don't know if it's sarcastic or not, but I'm looking forward to it."

The dorm reminds Mack of his days playing at the University of Buffalo, or the apartment at the same school where his little brother, LeDarius, now lives while playing linebacker. The training camp bed isn't quite up to specifications for $141 million players.

"I might have to get another layer of cushion on there, because it looks a little dead," Mack said. "But it should be smooth, though."

Bed of nails aside, the whole idea of leaving Chicago and the comforts of home for a few weeks at camp isn't lost on Mack.

Last year Mack missed all this as he watched and heard everything being said about how much money he might receive or what team he could end up with during a contract holdout with the Oakland Raiders. Then came the shocking trade to the Bears just before the regular season.

"I mean, on the outside looking in, it was cool," Mack said. "It was cool to see what was going on, what was being said, who thought this and who thought that. But ultimately I knew whatever happened, I was going to hit the ground running.

"I'm glad the Bears gave me that opportunity. I'm still trying to make the most of it."

In a sense, Mack must do what he did all over again. Except this year he has a full Bears defensive side doing the same. The entire Bears defense is trying to learn the system changes brought by new defensive coordinator Chuck Pagano, who took over after Vic Fangio left to coach the Broncos.

Pagano has already won plenty over with his personality, but the scheme is an adjustment.

Mack had 12 1/2 sacks last year, even with two missed games due to an ankle injury. If the Bears use him in a similar manner, more could be expected in Year 2.

"Schematically, you can't tell too much, but it's all-around solid," Mack said. "He's going to put you in position to make plays and that's what it's all about."

Mack pointed out it can't be much tougher learning the changes required in Pagano's scheme than it was arriving in Chicago without training camp or offseason work and playing eight days later in the opener against the Green Bay Packers.

"Who knows? I feel like they put me at different spots last year, even with the shortened time I had to learn the scheme," Mack said. "Ultimately, who knows, but who cares? As long as I can get out there and play with these guys, I'm going to be having fun. And we're going to ultimately try to win."

The goal for Mack, defensive end Akiem Hicks, and the defense is finding a rhythm like they had last year when they led the league in scoring defense, rushing defense and forcing turnovers.

"We want to say that we know the defense like the back of our hand," Hicks said. "We want to go out there and it's second-nature where we are not spending time thinking."

Mack, Hicks and the Bears defense are still smarting from the playoff loss to Philadelphia on Cody Parkey's double-doink field goal. So they put little stock in offseason talk the defense could regress or possibly lose its edge.

"It definitely wasn't good enough. I'm just looking forward to this year and getting better."

Rookie wide receiver Riley Ridley suffered a hamstring injury in the first practice of training camp Friday. Ridley was the team's second pick of the 2019 draft, in the fourth round. ... Coach Matt Nagy said he thought safety Ha Ha Clinton-Dix was close to being able to return from the physically unable to perform list. Clinton-Dix was put on the list due to a knee sprain suffered at the end of minicamp. There is no timetable on Clinton-Dix's return and veteran Deon Bush is replacing him in practice.