Kicking still issue for Bears in rematch vs Eagles 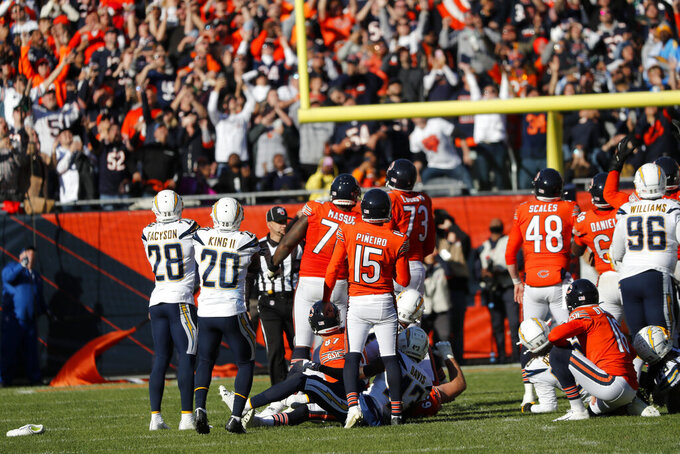 PHILADELPHIA (AP) — The Chicago Bears meet the Philadelphia Eagles for the first time since a double doink ended their season and they still haven't solved their kicking woes.

The Bears lost 16-15 to the Eagles at home in the playoffs last January when Cody Parkey's 43-yard field goal in the closing seconds was tipped at the line of scrimmage and bounced off an upright and the crossbar.

Rookie Eddy Pineiro won a wide-open kicking competition in training camp and booted a 53-yard field goal as time expired to beat Denver in Week 2. But Pineiro missed a 41-yarder in the final seconds in a 17-16 loss to the Chargers last week.

Afterward, Bears coach Matt Nagy was criticized for having quarterback Mitchell Trubisky take a knee on first-and-10 from the 21 with 43 seconds remaining and one timeout remaining. Then Pineiro made things worse by saying he would have preferred having the ball placed in the middle of the field rather than the left hash on his game-ending miss.

"That's a tough way to lose," Nagy said. "That's stating the obvious. But we could have done a lot of different things to make it not come down to that kick. Usually that's the case. For us it comes back to what we talked about before. We have to move forward. If we keep holding on to that, then it hurts us for the Eagles and that's not really what we want."

The Eagles have had far more stability at the position, using only five kickers since 1999: David Akers, Alex Henery, Parkey, Caleb Sturgis and Jake Elliott.

"We've been blessed here in Philly for a lot of years to have great kickers and the history of kickers here and Jake is no exception," Eagles coach Doug Pederson said. "I think sometimes, too, playing in outdoor stadiums, you just get used to the wind. You get used to a lot of things, and I'm kind of glad I don't have those types of issues right now where we can just kind of focus in on our team."

Both teams need a win Sunday when the Eagles (4-4) begin a stretch of three consecutive home games after three straight on the road, including a pair of lopsided losses at Minnesota and Dallas. They rebounded with a 31-13 win at Buffalo.

After setting a franchise low with seven rushing attempts against New Orleans, the Bears committed to the run last week. They had some success out of the I-formation and rookie David Montgomery had a career-high 135 yards. The Chargers were missing starting linemen Brandon Mebane and Justin Jones, and Philadelphia has been more successful stopping the run than Los Angeles.

The run game has been a strength for Philadelphia's offense. The Eagles had a season-high 218 yards on the ground at Buffalo. Jordan Howard had 96 yards and one touchdown on 23 carries. Miles Sanders had 74 yards on three carries, including a 65-yard TD. Boston Scott also had a 4-yard TD run.

The Bears looked more like their old dominant selves on defense against the Chargers last week after getting pushed around by Oakland in London and New Orleans at home. They went from giving up a season-high 424 yards against the Saints to holding Los Angeles to 231. They kept Philip Rivers to a season-low 201 yards passing and shut down the run game after getting gashed in back-to-back outings. Chicago gave up just 36 yards on 12 attempts after letting Oakland (169 yards) and New Orleans (151 yards) run at will. Inside linebacker Roquan Smith's big game against the Chargers was a major reason for the defense's success.

Wide receiver DeSean Jackson appears ready to return from an abdominal injury that has kept him out since Week 2. The Eagles have sorely missed Jackson's speed in the passing game. Quarterback Carson Wentz said: "Everybody loves playing with that guy." Nickel cornerback Avonte Maddox is expected to return from a neck injury suffered in Week 4, allowing the Eagles to have their three starters together for the first time this season.

Zach Ertz, who set an NFL record for tight ends with 116 receptions last year, has faced more double coverage from defenses because of Jackson's absence. He has 24 fewer catches and 220 fewer yards than he did at the midpoint of last season.

"Sometimes defenses do things to take him away and the benefit that we have is that we have a lot of other guys that can make plays and get open," Wentz said. "Zach is who he is and he's going to draw some coverage, and we're still going to get him involved however we can."