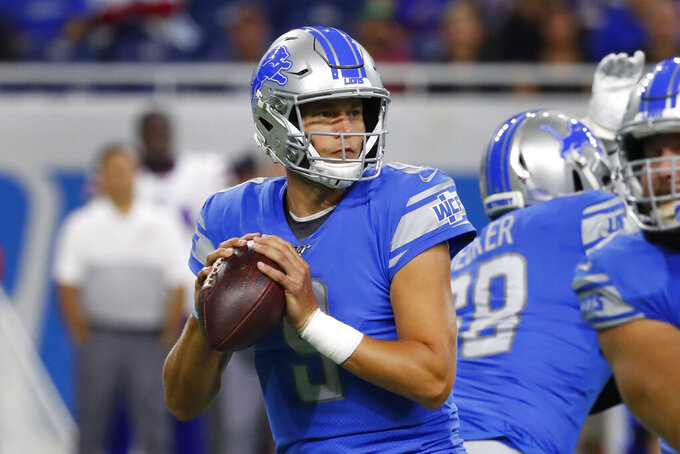 Detroit Lions quarterback Matthew Stafford drops back to pass during the first half of the team's NFL preseason football game against the Buffalo Bills in Detroit, Friday, Aug. 23, 2019. (AP Photo/Rick Osentoski)

GLENDALE, Ariz. (AP) — Ever since Arizona hired Kliff Kingsbury, there has been endless speculation about whether his version of the Air Raid offense would work against NFL defenses.

The 40-year-old coach is eager to show it off — and maybe even learn a little more about it himself — when the Cardinals host the Detroit Lions on Sunday.

"There's only one way to find out," Kingsbury said. "It's never been used. Nobody really knows what we're going to do or what it's going to look like, so we'll just take it one game at a time."

Arizona, which finished a dismal 3-13 last season, rebuilt around No. 1 overall pick Kyler Murray , who will get his first start at quarterback. He'll be surrounded by intriguing playmakers such as running back David Johnson and receivers Larry Fitzgerald and Christian Kirk.

Kingsbury says that concepts and certain portions of the Air Raid have already been introduced to the NFL, but he's ready to give it a unique spin. Even so, he doesn't think anything the Cardinals do will be particularly foreign to the Lions and second-year coach Matt Patricia.

"They have all summer to tweak and change and we've had the same," Kingsbury said. "I think that's been overblown a little bit, but it's all kind of part of the gamesmanship."

The 44-year-old Patricia led Detroit to a 6-10 record last season and is known for his defensive acumen. When asked to describe preparing for Murray, he acknowledged it was challenging.

"Interesting would be a good term," Patricia said. "I would say 'difficult' would probably be the better term. He's obviously a dynamic athlete, very strong arm, really just does a great job at making quick reads."

Even though the Lions had a mediocre record last year, they were solid on defense, ranking 10th overall and eighth against the pass. They also have one of the league's elite cornerbacks in Darius Slay.

Now they get their shot at stopping a rookie quarterback in his first game. If the Lions are confident they can stop Murray, they're not overplaying their hand.

"The guy is the truth. He's a complete package," Lions defensive back Quandre Diggs said. "If he was 6-5, y'all would be talking about he's the best quarterback prospect ever. He's been a superstar since high school. His arm is tremendous."

Here are a few more things to watch when the Cardinals hosts the Lions:

The Lions' new-look offense will make its debut with first-year coordinator Darrell Bevell.

"He's trying to get to know our players and myself as much as he can. I'm trying to get to know him and his system as best I can and trying to make that thing gel as quickly as possible," quarterback Matthew Stafford said, entering his 11th NFL season. "It's always a work in progress, whether it's Year One, Day One, or Year 10."

Bevell, a former Seattle Seahawks and Minnesota Vikings offensive coordinator, is expected to transform the Lions from being a pass-happy team to one that aims to strike a balance.

"He likes to run the ball. I play running back," Kerryon Johnson said with a grin. "That should mean good things."

Arizona's offense was very vanilla during the preseason. Kingsbury said that was by design because he didn't want to give away any of the team's new scheme.

He doesn't expect the transition to the regular season to be a problem against the Lions.

"That's what everybody in the league is doing — nobody shows too much," Kingsbury said. "We may have been a little extreme being that it's our first year. But you just rep it in practice and make it as game-like as possible."

Detroit linebacker Jarrad Davis was in uniform Wednesday, but didn't practice with teammates nearly two weeks after being carted off the field with an injured right leg. Lions center Frank Ragnow hurt his right knee in the same preseason game, but he appears healthy enough to play in the opener. Detroit's defensive tackles are perhaps the strength of the team, though depth at the position may be depleted a bit due to Da'Shawn Hand's elbow injury.

Arizona has two of the most experienced players in the league with Fitzgerald and linebacker Terrell Suggs. Fitzgerald, who is in his 16th season, recently turned 36. Suggs is in his 17th season and will turn 37 this fall.

Both are starters on the depth chart and expected to make big contributions. Fitzgerald has been with the Cardinals his whole career, while Suggs comes to Arizona after spending his first 16 years with Baltimore.

Arizona's run defense should be tested in the first game by a Detroit offense that's expected to be more focused on gaining years on the ground.

The Cardinals were last in the league in rushing defense last season. There are three rookies in the defensive line rotation, according to the depth chart. Third-round pick Zach Allen is listed as a starting defensive end, while seventh-rounder Michael Dogbe is a backup defensive end and free agent signee Miles Brown is a backup nose tackle.