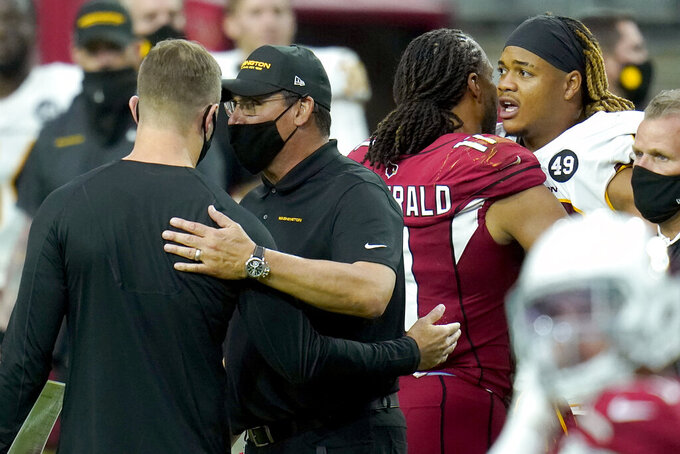 CHARLOTTE, N.C. (AP) — Matt Rhule and Kliff Kingsbury are set to match coaching strategies again — only this time at the NFL level when the Carolina Panthers host the Arizona Cardinals on Sunday.

The two former high-profile college coaches met twice in the Big 12 with Kingsbury’s Texas Tech Red Raiders beating Rhule’s Baylor Bears in 2017, but Rhule gained a measure of revenge the following year with a victory that directly resulted in Kingsbury being fired with two years left on his contract.

“Just to tell you the kind of man he is, he literally texted me an hour after the game as it was coming out I had gotten fired just saying, ‘Sorry about that,'" Kingsbury said. “And he was genuine about it. He really felt bad I had lost my job because they had beat us.”

The two have since forged a friendship.

When Rhule was considering leaving Baylor earlier this year to take the Carolina job, he called Kingsbury for advice.

“I was sad for him at the time because I think he’s a really good coach, I think he did a great job at Texas Tech and when he was leaving I just wanted to call and let him know if there was anything I could do for him, just like I know he would do for me," said Rhule, who won his first NFL game last Sunday. "So when he got this opportunity in Arizona, I got fired up for him. Every time I get a chance to see him I make sure to reach out.”

Said Kingsbury of Rhule: “He’s a phenomenal coach and an even better person too. He’s one of my favorite people I’ve met in coaching.”

Here are some things to watch in Sunday's Cardinals-Panthers game:

The Cardinals’ depth in the secondary should be tested since the team’s top three safeties will likely be on the sideline.

Budda Baker (thumb surgery), Jalen Thompson (ankle) and Chris Banjo (hamstring) are all hurt, which should mean a bigger role for Deionte Thompson and Charles Washington.

It could also open up more playing time for No. 8 overall pick Isaiah Simmons. The do-it-all defender has focused on linebacker so far during his rookie season but Kingsbury acknowledged the 22-year-old could help fill the hole in the secondary.

“Isaiah is a guy who played multiple positions, obviously, there at Clemson,” Kingsbury said. “He has a feel for some of that, and with those bodies being down, we may have to look into that.”

WHAT BROWN CAN DO FOR YOU

Speaking of Simmons, the Panthers passed on him with the No. 7 pick so they could take Auburn defensive tackle Derrick Brown, a move that surprised many. After struggling to get his feet wet the first two games, Brown began to emerge as a solid run defender last week against the Chargers and had three tackles for a loss and is beginning to look like a player with big-time potential.

In fact, Rhule described the play of the 335-pounder as “dominant” last week.

What would also help Brown is if two-time Pro Bowler Kawann Short can return to the lineup. Short has missed the past two games with a foot injury, and his presence would force the Cardinals to decide which defensive tackle to double team.

Cardinals second-year receiver Andy Isabella is finding a role in the team’s offense after a disappointing rookie season.

The second-round pick had four catches for 47 yards and a career-high two touchdowns last weekend against the Lions. The 5-foot-9, 188-pounder is known for his straight-line speed and has proved a good complement for DeAndre Hopkins, who leads the NFL in receptions.

“He had a great camp and really did some nice things, and to see him transition that to the playing field was great,” Kingsbury said. “He’s a guy who can really run. He’s worked really hard at it, very conscientious in his preparation, so it was great to see him have that success.”

The Cardinals hoped that adding Hopkins during the offseason would give second-year quarterback Kyler Murray an elite No. 1 option to anchor the offense.

So far, it’s worked out even better than anticipated.

Hopkins leads the NFL with 32 receptions, 356 yards receiving and also has an NFL-high 21 catches that have resulted in a first down.

DAVIS GETS ANOTHER CHANCE

Carolina's Mike Davis will get the start again at running back again Sunday with Christian McCaffrey on short-term injured reserve with a high ankle sprain. McCaffrey is expected to miss at least four weeks.

In his starting debut with Carolina, Davis was effective as both a rusher and passer, amassing 91 yards and a touchdown.

The Panthers will be allowed to have about 5,200 fans in Bank of America Stadium for Sunday's game under new state guidelines. There were no fans allowed for the team's home opener.