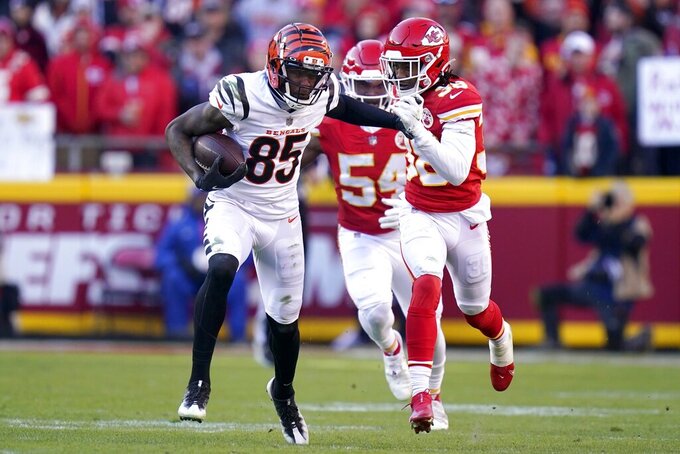 Player props can be useful in a variety of ways, from taking advantage of them straight up within the betting market to measuring a player’s potential to produce in daily fantasy football.

Here we’ll focus on utilizing our projections and other tools on betting player props.

For this article, we are using the odds provided at FanDuel Sportsbook to pinpoint spots where value can be had on Sunday.

For the prop-betting experience on FanDuel Sportsbook you can track your player props with real-time updates and place in-game props.

It’s obvious that quarterbacks generate the majority of attention for awards such as these.

But has anyone been more dominant this season than Rams wide receiver Cooper Kupp?

Kupp has not slowed down this postseason. He has had 32 targets in three games, catching 25 passes for 386 yards and four scores.

If we look at our power rankings, the Cincinnati Bengals are a bottom-half defense against the pass, too.

In the playoffs, Tyreek Hill had seven catches for 78 yards and a score, and Derek Carr and Patrick Mahomes both had at least 275 passing yards against them.

While teammate Ja’Marr Chase garners the majority of the attention after a brilliant rookie season — wide receiver Tee Higgins has been good in his own right.

Chase is a candidate to draw blanket coverage from Rams cornerback Jalen Ramsey.

If he does, that could lead to a big day for Higgins.

Higgins was key in the AFC championship game against the Chiefs when he led the team in targets (10) and receiving yards (103).

Earlier in the playoffs, Tampa Bay's Mike Evans had 119 yards and a score against this Los Angeles Rams defense.

With these types of odds, it’s hard to ignore Higgins and the value here.

A question has consistently come up for quarterbacks. This is an easy bet if they pass for a touchdown, right?

Not exactly. Betting on a quarterback means they have to run the ball in — or they could catch a touchdown pass, as well.

Neither quarterback has shown a ton of rushing prowess. However, Stafford has two rushing touchdowns in the playoffs.

On the full season, the Rams actually lead the NFL in percentage of touchdowns from inside the 10 coming via the pass (69.4%). That would normally mean avoiding a rushing score for Stafford.

However, they’ve shown a tendency shift in the playoffs. On plays from inside the 3 in the postseason, the Rams have called six rushes to just one pass. Three of those carries went to Stafford, who is tied with Devin Singletary for most carries at the goal line in the playoffs.

Given these odds, it could be worth a look to see if Los Angeles commits to letting Stafford take more chances near the end zone in the final game of the season.