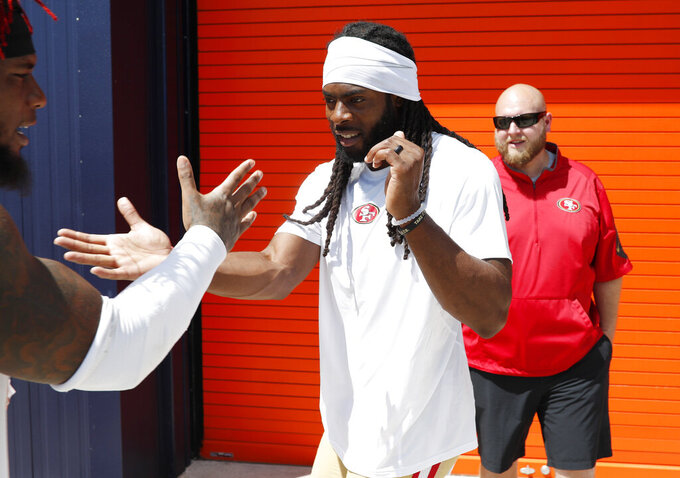 San Francisco 49ers cornerback Richard Sherman, right, greets middle linebacker Kwon Alexander as he heads up to the podium to speak to reporters after a combined NFL football training camp with the Denver Broncos at the Broncos' headquarters Friday, Aug. 16, 2019, in Englewood, Colo. (AP Photo/David Zalubowski)

SANTA CLARA, Calif. (AP) — Kwon Alexander is ready to show why he was the prime target for the San Francisco 49ers when free agency started last March.

Alexander has worked his way back from a knee surgery that ended his final year in Tampa Bay in October and is set to get on the field for the first time since the injury when the Niners visit the Kansas City Chiefs in an exhibition game Saturday night.

"There's a lot of excitement right now. I have to calm down a bit and take it day to day but I'll be ready Saturday," Alexander said Wednesday. "I've been working hard, working my butt off. It's time to go."

The 49ers have been patient with the linebacker this summer as he got back up to speed. They eased him into team drills and held him out of the first two exhibition games.

They were less patient with Alexander last March, when they moved quickly to lock him up with a four-year contract worth up to $54 million on the first day teams were allowed to contact free agents from other organizations.

Alexander's deal was the most lucrative contract the Niners gave to any free agent and he is being counted on to bring speed and playmaking to the defense, along with No. 2 overall pick Nick Bosa at defensive end and trade acquisition Dee Ford at the other defensive end.

Alexander will team up with second-year middle linebacker Fred Warner in the middle of San Francisco's defense.

"Kwon has brought a lot of energy," cornerback Richard Sherman said. "He's brought consistency, he's energetic, he's a hitter. He's all over the place. He's loud. You can hear him no matter where you go. You love to have him out there. He's a really smart, heady player. It's good for Fred, too, because Fred is not the most vocal player and they kind of complement each other."

His most productive season came in 2016 when he led the NFL with 108 solo tackles and also had 12 tackles for loss. He has averaged 8.3 total tackles per game in his career, the sixth most in the league since 2015 among players with at least 25 games played. But Alexander also led the NFL with 67 missed tackles from 2015-17, according to SportRadar.

His biggest attribute is his sideline-to-sideline speed, which took time to return following surgery but has been evident on the practice field the past couple of weeks.

"The range, the speed, all of it, just his fluidity keeps getting better and better," defensive coordinator Robert Saleh said. "It's no pressure for him to go and be great, an All-Pro in his first preseason action. It's just, go out there, get his game reps in and get back comfortable playing football."