Kyler Murray seems happy, so Cards are too after NFL draft 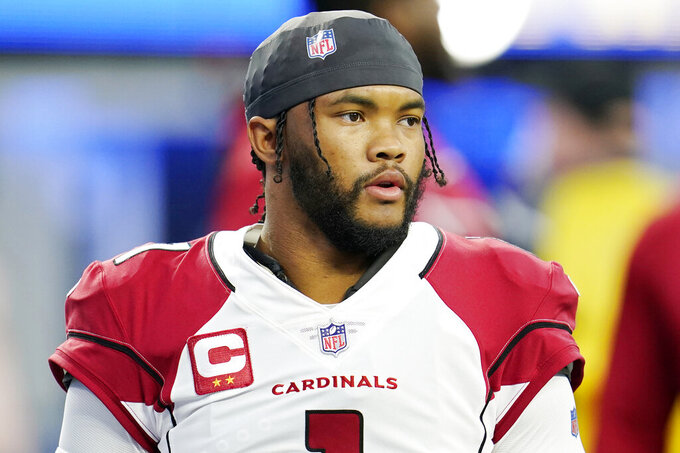 FILE - Arizona Cardinals quarterback Kyler Murray (1) warms up before an NFL wild-card playoff football game against the Los Angeles Rams in Inglewood, Calif., Jan. 17, 2022. The Cardinals appeared to be one of the more stable franchises in the NFL just six months ago. That changed a little after a late-season collapse and a passive-aggressive contract spat between Murray and the team’s front office brought some drama to the desert. (AP Photo/Marcio Jose Sanchez, File)

TEMPE, Ariz. (AP) — The Arizona Cardinals did a good job of filling perceived needs during this year's NFL draft, adding a talented young receiver in a first-round trade, a pass-catching tight end in the second round, and a pair of intriguing edge rushers in the third round.

More importantly, they also appear to have a happy quarterback.

The contract drama between Arizona's front office and star quarterback Kyler Murray — which has overshadowed much of the team's offseason — has eased significantly over the past week. Cardinals coach Kliff Kingsbury and general manager Steve Keim praised the quarterback, Murray returned that praise with his own positive energy, and the team extended an olive branch by picking up Murray's fifth-year contract option.

“I wanna win Super Bowls with the Cardinals, AZ is home,” Murray said on social media.

That's exactly what the Cardinals and their fans wanted to hear.

Arizona continued to build around Murray this week by adding receiver Marquise “Hollywood” Brown in a draft-day trade, acquiring the 1,000-yard pass catcher from the Ravens for the No. 23 overall pick. Murray and Brown played in college together at Oklahoma when Murray was the Heisman Trophy winner in 2018.

Murray, at least over the phone, was pleased with the move.

Brown caught 91 passes, including six touchdowns, for 1,008 yards in a Ravens offense that is effective but not exactly known for its wide-open philosophy. He could thrive in the desert next to three-time All-Pro receiver DeAndre Hopkins, who was dominant last year before a knee injury ended his season.

The offensive possibilities seem endless, especially with Murray under center. Now the Cardinals and their two-time Pro Bowl quarterback can work on a long-term can extension: It appears Murray's looking for a deal in the neighborhood of Buffalo quarterback Josh Allen's $254 million pact he signed last offseason.

Keim believes it will get done.

“Nothing's changed,” Keim said. “The way we've approached it is we have free agency, we have the draft, then we'll take a deep breath and refocus. It's the same reason every other player who has been a third-year quarterback, (their deal) has been done in the middle of the summer to the late summer. It's no different for us. It's just sort of the way the system works."

The most surprising pick of the Cardinals' draft came in the second round, when they scooped up Colorado State tight end Trey McBride with the No. 55 spot.

McBride's talent and college production were both solid, it's just that the Cardinals appeared set at the position. Zach Ertz and Maxx Williams are both under contract for next season.

Keim said McBride was simply too good to pass up and represents an investment in the future. For his part, McBride said he's ready to accept any role and eager to learn from Ertz, a three-time Pro Bowler who won a Super Bowl with the Eagles.

“Zach's played such a long time and been so successful,” McBride said. “To just be around a guy like him and learn from him is something I'm so excited to be a part of.”

Arizona had an obvious need for pass rushers after it lost Chandler Jones to the Las Vegas Raiders in free agency. Jones leaves Arizona after six seasons and 71 1/2 sacks, most in franchise history.

The Cardinals used both their third-round picks on potential replacements: San Diego State's Cameron Thomas and Cincinnati's Myjai Sanders. Thomas was an ultra-productive college player who tied a Mountain West record with 20 1/2 tackles for loss. Sanders appears to be more of a long-term project, but was a big part of the Bearcats' team that advanced to the College Football Playoff last year.

The Cardinals were eager to deal for Brown despite giving up their first-round pick to the Ravens. Recent history suggests it could be a productive move.

Arizona made a similar trade in 2020, dealing a second-round pick and running back David Johnson to the Texans for Hopkins, who has continued his stellar career in the desert.

Arizona had five picks in the final two rounds.

The Cardinals took USC running back Keaontay Ingram and Virginia Tech offensive lineman Lecitus Smith in the sixth round. Both should have a decent chance to make the roster considering the lack of depth at each spot.