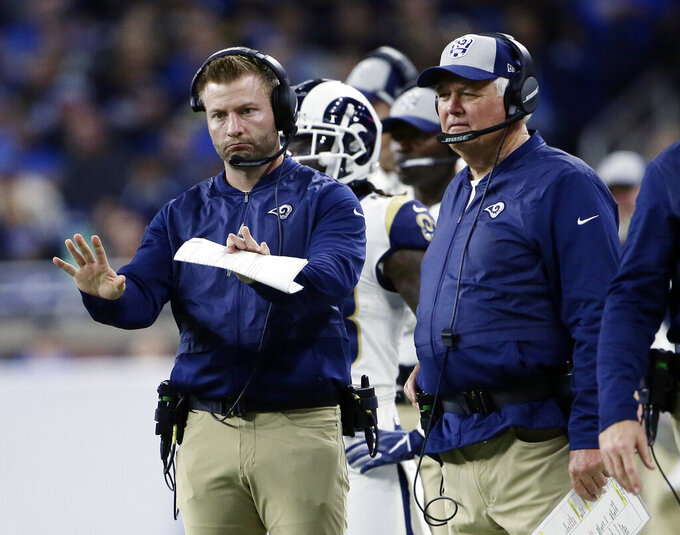 FILE - In this Dec. 2, 2018, file photo, Los Angeles Rams head coach Sean McVay motions to his team beside defensive coordinator Wade Phillips, right, during the second half of an NFL football game, in Detroit. Veteran defensive coordinator Wade Phillips has been fired by the Los Angeles Rams after three winning seasons. Phillips announced Monday, Jan. 6, 2020, on Twitter that the Rams are not renewing his contract. (AP Photo/Duane Burleson, File)

Phillips announced Monday on Twitter that the Rams are not renewing his contract, and the team later confirmed it. The 72-year-old former head coach of a record six NFL teams says he wants to stay in coaching.

The Rams finished 9-7 this season, missing the playoffs for the first time in Phillips' three-year partnership with Sean McVay. Although Phillips' distinctive 3-4 defense led by Aaron Donald again finished near the top of the NFL in many advanced metrics this season, McVay has decided to shake up his coaching staff for a third consecutive offseason.

McVay offered no reasoning for his decision in a brief statement issued through the team.

"Coach Wade has been a veteran voice in heading our defense for the past three seasons," McVay said. “His wealth of experience, sound advice, and helpful demeanor has been invaluable to our coaches and players, and also has set an example for me as a head coach and a leader of men.”

The Rams also fired veteran running backs coach Skip Peete, who had been with the franchise since before McVay and Phillips arrived.

Phillips and the offense-minded McVay joined the Rams together in 2017, with the veteran coordinator serving as an experienced counterpoint and adviser to the youngest head coach in modern NFL history. McVay, then 30 years old, asked Phillips to join him in Los Angeles before he even got the job.

The duo engineered a stunning one-season turnaround of the Rams, who had endured 13 consecutive non-winning seasons and a 12-year playoff drought. While McVay put immediately together a prolific offense, Phillips ran a defense that eventually backstopped the Rams to 33 regular-season victories, two NFC West titles and four playoff games in three seasons.

The Rams won the NFC championship last season, and Phillips' defense held New England to 13 points in the lowest-scoring Super Bowl ever. But McVay's offense scored only three points against the Patriots, and its fall from the league's elite continued this season.

Phillips' defense remained largely solid this season, as it had been for his entire tenure in Los Angeles. With Donald backed by a talent-studded group including pass-rusher Dante Fowler, leading tackler Cory Littleton, Eric Weddle, Clay Matthews and midseason acquisition Jalen Ramsey, the Rams finished near the middle of the league this season in points and yards allowed while ranking higher in advanced metrics, including defense-adjusted value over average (DVOA).

But the Rams defense's bad games were glaring debacles that inflated the statistics of an otherwise above-average unit. Los Angeles gave up a combined 144 points in losses to Tampa Bay, Baltimore and Dallas while the Rams missed the playoffs by one game.

“I want to thank them for the opportunity to be a part of their success the last 3 years,” Phillips wrote. “Most of all I want to thank the players who I loved working with. I still want to coach and feel I can contribute.”

The Rams even hired Phillips' son, Wes, as their tight ends coach this season. McVay and Wes Phillips worked together as assistants in Washington, which led to McVay's partnership with Wade Phillips.

Phillips has coached in the NFL since 1976, working for 11 franchises. The son of famed coach Bum Phillips has been a head coach for more teams than anyone in league history, presiding over Denver, Buffalo, Dallas, New Orleans, Atlanta and the Houston Texans.

He coordinated the defense with which the Broncos won the Super Bowl four years ago, earning Phillips' first championship ring. When he wasn't retained in Denver one season later following Gary Kubiak's departure as head coach, Phillips teamed up with McVay.

The Rams' defense consistently outplayed McVay's offense this season, but its bad games were stinkers. Last month, the defense also allowed San Francisco to convert on two third-and-16 plays on the final drive leading to the 49ers' winning points in the loss that eliminated the Rams from the postseason race.

McVay's success has led to heavy staff turnover for Los Angeles, but the previous upheaval had been about assistants leaving for bigger jobs. The Rams lost Matt LaFleur and Greg Olson after they went 11-5 and won the division in McVay's debut season in 2017, and the Rams lost Zac Taylor a year ago after their Super Bowl run.

The candidates to be Phillips' replacement are likely to include Aubrey Pleasant, the Rams' young cornerbacks coach. Pleasant spent four seasons coaching alongside McVay in Washington before they joined the Rams together in 2017.

Peete had just completed his 22nd consecutive season as an NFL running backs coach. He joined the Rams on Jeff Fisher's final staff and stayed on when McVay took over.

Peete has been Todd Gurley's position coach for the franchise running back's entire career. Gurley is coming off a terrible season by his lofty standards, ranking 21st in the NFL with a career-low 857 yards rushing along with just 207 yards receiving.

"When I came to the Rams in 2017, our running backs had a unanimous vote of confidence for Skip Peete to lead our running back corps," McVay said. “Since then, he has helped our running backs to make great strides in the last three years, and his more than 20 years of coaching experience was imperative in our offensive growth.”