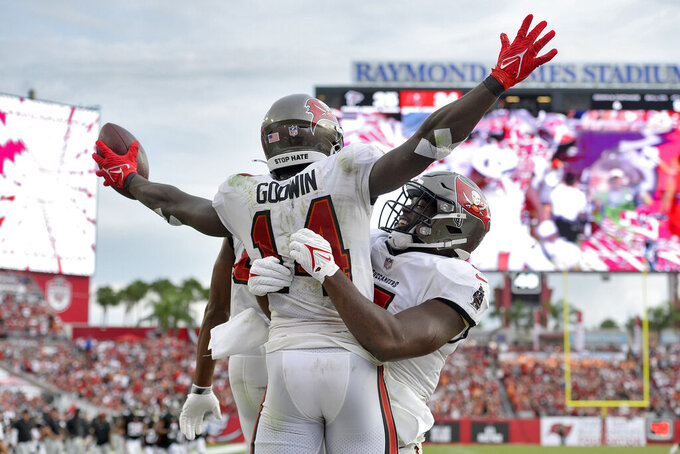 Tampa Bay Buccaneers wide receiver Chris Godwin (14) celebrates with teammates after his touchdown against the Atlanta Falcons during the second half of an NFL football game Sunday, Sept. 19, 2021, in Tampa, Fla. (AP Photo/Jason Behnken)

Even after nearly two years of watching Tom Brady on a weekly basis, Arians plans to check out Stafford's pure talents again Sunday at SoFi Stadium when the Tampa Bay Buccaneers (2-0) visit the Los Angeles Rams (2-0) for an early season showdown between the team that won the Super Bowl in its home stadium last season and a team that hopes to duplicate that feat this year.

“He’s one of the most talented guys that I’ve ever seen,” Arians said of Stafford, who spent the past 12 seasons in Detroit. “He can make every single throw on the field, and with ease. He can stretch you all kind of ways, horizontally and vertically. You have to be in great position defensively to stop him.”

Tampa Bay and Los Angeles have been two of the most impressive teams in the NFL over the first two weeks of the season. Much of that success is down to the smooth, prolific performances of their veteran quarterbacks, who have thrown for 1,254 combined yards with 14 TDs and two of the NFL's top passer ratings.

Stafford is among the handful of quarterbacks talented enough to last 13 years as an NFL starter, yet he is winless in the playoffs while Brady has 34 victories and seven rings. The first-year Rams passer doesn't wonder what might have been if he had been drafted by a coach like Bill Belichick rather than a team like the Lions.

“I don’t think about that kind of stuff,” Stafford said with a smile. “I try to be as present as I possibly can. I have a ton of respect for what he’s been able to accomplish. What a talented guy. What a great leader to be able to do what he’s done at two different spots and really elevate the guys around him. ... Right now, he’s playing great football, about as good as I’ve ever seen him play.”

The NFC powers are meeting for the second straight year, following the Rams' 27-24 victory at Tampa Bay last November. The Bucs took another home loss six days later against Kansas City by an identical score — and they haven't lost a game since, going 4-0 in the 2020 regular season, 4-0 in the playoffs and 2-0 this season to extend the longest winning streak in franchise history.

Brady leads the NFL with nine touchdown passes, the most he’s ever thrown through the first two games of a season. With four more against the Rams this week, he’d join Russell Wilson (14 in 2020) and Patrick Mahomes (13, 2018) as the only players in NFL history to toss at least 13 scoring passes in the first three games of a team’s season.

Arians partly attributes the fast start to Brady being more comfortable in an offense he was still learning at this point a year ago.

“I think he has a great grasp of it. That’s obvious. The way teams are trying to play us, he sees it early and they usually don’t break their pattern,” Arians said. “I mean, he didn’t know the plays last year. ... He knows them all now."

Tampa Bay allowed three sacks and five quarterback hits on Brady last week by Atlanta’s fairly ordinary defense. The Rams have one of the league’s most formidable pass rushes with Aaron Donald and Leonard Floyd leading the way, so keeping Brady uncomfortable in the pocket seems a logical key to success for Los Angeles this weekend.

Defensive coordinator Raheem Morris wasn’t on the Rams’ staff last season, but he says the win at Tampa Bay “was kind of the formula on what you’d like to get done versus a Tom Brady football team.”

The Rams bothered Brady early and forced him to get rid of the ball quickly, and they prevented big plays in the short passing game with sure tackling.

Bucs tight end Rob Gronkowski, who has a pair of TD receptions in three consecutive games going back to the Super Bowl, said this week’s matchup against the Rams definitely has a special feel to it.

“Every game is important — that’s a fact — but there are games that definitely feel more important, even though each is just a single game,” Gronkowski said.

“They’ve got a very solid team. They’re 2-0, so there is a lot more hype,” the 11th-year pro added. “Sometimes you go into a game and there’s just no hype. ... It kind of gets the jitters going with games like this. It’s going to be a good one.”

The Bucs avenged three of their five regular-season losses during last winter’s playoff run, ousting the Saints (who had beaten them twice) before getting payback against the Chiefs in the Super Bowl.

A potential rematch with the Rams in the NFC championship game failed to materialize when the Rams were eliminated by the Packers.

“We played them close last year and they beat us,” Bucs receiver Mike Evans said. “I actually wanted to play them in the playoffs just to avenge that loss as well. But, we get to go to LA ... I’m looking forward to seeing what the new stadium is like, and hopefully we can come out of there with a W.”