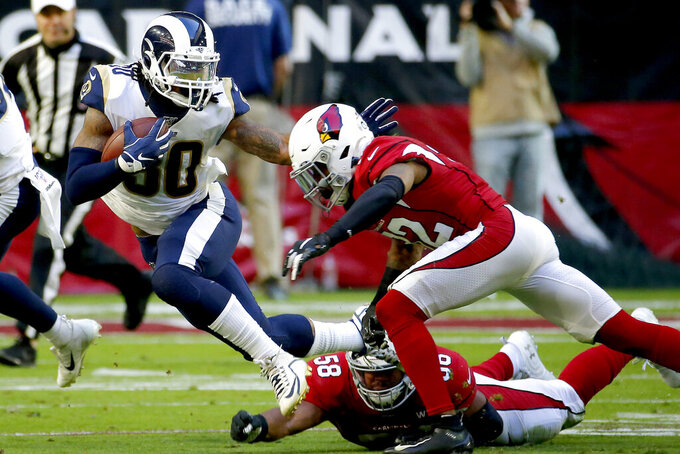 The Los Angeles Rams’ second residency at the Coliseum will end quietly Sunday when they finish out their disappointing season against Arizona.

And if the Cardinals are bidding goodbye to Larry Fitzgerald at the same time, they’re also doing it without fanfare — which is just how their matchless receiver wants it.

The Rams (8-7) are disappointed to be merely playing out the string when they wrap up this four-year homecoming stint at their 96-year-old LA landmark home. Although they could finish with a winning record for the third straight season under coach Sean McVay, they’ve failed to reach the playoffs one year after making the Super Bowl.

“I think it’s about pride at this point,” quarterback Jared Goff said. “It’s never a consolation, but it is about who you are as a man and who you are as a team. I think we’ve got the right guys in here who will handle it the right way. Something you definitely never look forward to, but you definitely will learn a lot about guys, and you always expect the best out of these guys.”

Before the Rams move into under-construction SoFi Stadium next season, they’ve got a chance to leave the Coliseum on a respectable note. McVay doesn’t plan to rest anyone who is healthy enough to play, and the Rams are looking at the finale as a chance to set a strong tone heading into the offseason after multiple disappointments.

“I think we owe it to the guys to compete to the best of our ability,” McVay said. “Everybody that’s able to play, as if we were playing in a playoff game, we’re going to approach it that way.”

“We don’t really reflect too much,” Kingsbury said. “It’s just about each and every week trying to get better. ... We want to put our best foot forward, and we’re going to play the guys that we think give us the best chance to win. Guys know we’re going all-in to try and win this game.”

The game also could be the finale for the 36-year-old Fitzgerald, the second-leading receiver in catches and yards in NFL history. Nobody knows for sure, because Fitzgerald has stuck with his recent policy of refusing to give any public insight into his retirement plans.

Even Kingsbury likely doesn’t know what Fitzgerald is thinking, but the coach hopes to send out the season with another productive game for Fitzgerald. They’ll get together next month for Kingsbury to plead his case for Fitzgerald to return in 2020.

Here are more things to know about the Coliseum’s fond farewell:

The Rams first played at the Coliseum in 1946 after relocating from Cleveland, bringing pro football to the West Coast for the first time. They stayed at the venerable stadium until 1979, when they moved to Anaheim in the first of many questionable business decisions under then-new owner Georgia Frontiere. After new owner Stan Kroenke reversed Frontiere’s decision to move the team to St. Louis, the Rams spent the past four seasons back at the Coliseum, which underwent an extensive renovation before this season. The Rams are only moving about 7 miles southwest to SoFi Stadium next year, and the Coliseum isn’t going anywhere: It’s still the home of the USC Trojans, the West Coast’s winningest college football program.

Arizona defensive end Chandler Jones is the NFL leader with 19 sacks. After getting four sacks last week in Seattle, Jones has a plausible chance of reaching Michael Strahan’s single-season NFL record of 22 1/2 sacks. “It’s out there in front of him, and he knows that,” Kingsbury said. Aaron Donald, the Rams' 2018 NFL sacks champion, finished with 20 1/2 last year. Jones will have to do something special to get there: Despite inconsistent offensive line play from the Rams, Jared Goff has been sacked just 21 times this season, only the 28th-most in the league.

Todd Gurley’s disappointing season ends with the Rams’ franchise running back still needing 25 yards from scrimmage to reach 1,000 for the fifth straight year. That’s an ugly necessity for a player who led the NFL with 2,093 total yards in 2017 and followed up with 1,831 last year. McVay’s inability to put Gurley in successful situations will haunt the coach in the offseason, he has said.

The Rams’ disappointing year is certain to lead to roster turnover in the offseason, and the franchise handed out huge contract extensions to several key players recently. That all means several stalwarts from McVay’s tenure could be moving on for reasons related to finance or performance. Left tackle Andrew Whitworth, defensive lineman Michael Brockers and linebackers Dante Fowler and Cory Littleton are all among Los Angeles’ pending unrestricted free agents, while other vets including safety Eric Weddle could be out. Defensive coordinator Wade Phillips’ contract also is set to expire, and the Rams haven’t clarified the 72-year-old coaching veteran’s future even while his defense has consistently outperformed McVay’s offense.

Kingsbury will make his first appearance as a head coach at the stadium where he almost spent this season as Southern California’s offensive coordinator. Kingsbury accepted the job from Clay Helton and held it for 34 days before the Cardinals unexpectedly zeroed in on him as their successor to Steve Wilks. Graham Harrell got the job when Kingsbury abruptly resigned, and Harrell recently got a generous contract extension for a strong debut season.