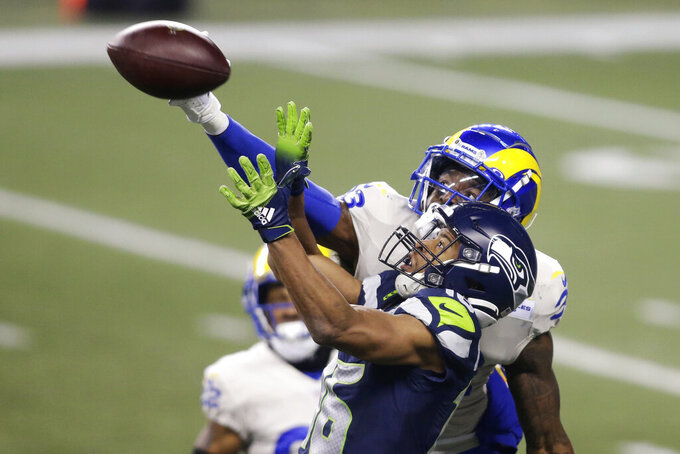 LOS ANGELES (AP) — For a team that doesn't know who its starting quarterback will be this weekend when it faces the NFC's top-seeded club in sub-freezing temperatures, the Los Angeles Rams actually are in pretty good shape.

The Rams (11-6) put together one of their most encouraging performances of the season last weekend in Seattle, beating the Seahawks 30-20 with a comprehensively strong effort highlighted by standout games from rookie running back Cam Akers and cornerback Darious Williams.

The powerhouse Green Bay Packers (12-4) are standing between the Rams and a trip to the NFC championship game. Los Angeles will be at frigid Lambeau Field on Saturday to match its top-ranked defense against Aaron Rodgers and the NFL’s No. 1 scoring offense.

The Rams are underdogs again, but their playoff opener in Seattle instilled optimism.

“It will be cold, but it’ll be a great change of pace for us,” coach Sean McVay said Sunday. “We’re excited about the opportunity to still be in this thing.”

John Wolford started the game in Seattle, but Jared Goff and his surgically repaired right thumb finished it after Wolford got a neck stinger early on. McVay plans to wait to choose a starting quarterback again this week — and even when he does, he plans to conceal it for strategic reasons.

“This is what you love,” McVay said. “These are the type of matchups and opportunities that as a competitor, you can’t wait for."

The Rams' performance in Seattle suggests they could be coming together at the right time for this opportunity. After four months of shuffling forward and backward, Los Angeles' offense put up 333 yards and five scoring drives on the road — and that's usually enough to win given the LA defense's consistent excellence.

Williams' 42-yard interception return for a touchdown punctuated the standout effort against Russell Wilson. Rodgers is an even bigger challenge, but few teams in the NFL seem more qualified than the Rams, who have scored five defensive touchdowns this season.

“I’ve never played with a defense of this caliber,” Goff said. “It’s exciting. It makes what we do on offense, I don’t want to say easier, but it gives us a lot more opportunities, I believe. What they’ve been doing this year is amazing. We’ve been able to rely on them in some spots. I’m sure at some point they’re going to have to rely on us, but we’re playing some good ball right now on defense."

The Rams missed the playoffs last year, but most of the core from their 2018-19 Super Bowl team is intact. Los Angeles' key players can draw from the experience of that lengthy postseason run to find the consistency and durability necessary to keep moving on.

And when it's as cold as Lambeau Field in January, it's a good idea to keep moving.

“It tells you the talent we’ve got in our locker room,” Williams said. “Every single body, from the front seven to the back seven, everybody can make plays. Our offense is good, don’t get me wrong. They’ve been balling, but when you have a defense that can go out there and score, it just gives them more confidence.”

Rodgers is an enormous challenge, but the Rams' pass defense has been stellar. The league's No. 1 group held Wilson to 174 yards passing — his fewest in a playoff game in five years, and third fewest in his 16-game postseason career — and two touchdowns even though the Seahawks were playing from behind from the second quarter onward. LA sacked Wilson five times and hit him 10 times, while Williams' TD highlighted several impressive plays in coverage.

Several key Rams need to get healthy this week, and the NFL gave them no help by scheduling their game for Saturday instead of Sunday. All-Pro DT Aaron Donald, Cooper Kupp, Leonard Floyd and Wolford all took significant damage in Seattle, while Goff and 39-year-old left tackle Andrew Whitworth need every hour of rest possible in their rushed comebacks from surgery.

The Rams' kicking game is solid for the first time all season. Matt Gay made all three of his field goal attempts in Seattle, giving him 12 straight over the past five games. He has also banged 28 of his 35 kickoffs for touchbacks since arriving in late November.

The Rams’ quarterback uncertainty largely kept their passing game in check. Wolford and Goff combined for 184 yards through the air in Seattle on just 12 completions. It won’t get any easier for Kupp and Robert Woods in frigid Green Bay.

Donald has a rib injury, and leading receiver Kupp has knee bursitis. They're expected to play, but starting left guard David Edwards is more uncertain with an ankle injury.

0 — The number of turnovers committed by the Rams in Seattle. It was their first game all season without a giveaway.

The Rams have never played a postseason game at Lambeau Field, which opened in 1957. The franchises' only playoff meetings were in Milwaukee and in St. Louis.