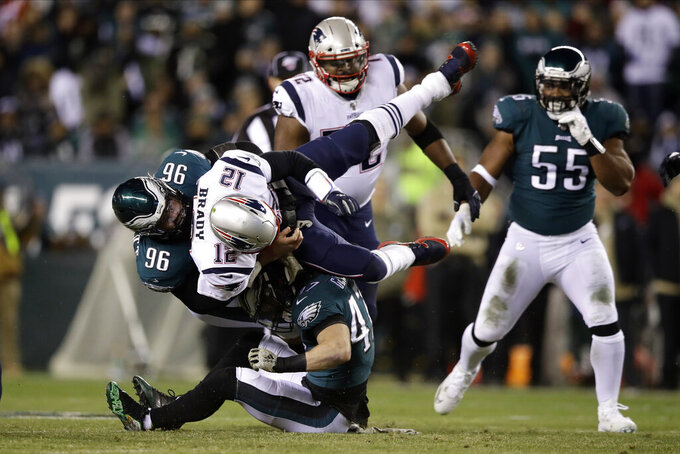 The defending Super Bowl champions have the best record in the conference — tied for the best in the NFL — with a two-game lead over Buffalo in the AFC East as they try to earn their 11th straight division title. The Patriots beat the Philadelphia Eagles 17-10 on Sunday in a rematch of their 2018 Super Bowl loss.

But the offense couldn’t move the ball. Tom Brady had one of his worst games of the season. The only touchdown came on a trick play. They still haven’t beaten anyone good.

And it’s not just fans who are upset.

Brady spat out a series of monosyllabic answers after the victory, crediting the defense with keeping the team in the game. When asked if he was discouraged, he said: “Well, we just played for three hours. So I think everyone is a little tired.”

Any other team would love to have the Patriots’ problems. But New Englanders are concerned that the team might not make it back to the Super Bowl for a fourth straight year.

The problem, for now, clearly is the offense.

Brady threw for 216 yards on 47 attempts, and he threw 14 incompletions in the first half — a career high. It was Julian Edelman completing a double-pass to Phillip Dorsett for a 15-yard touchdown that was the game’s winning score.

The lack of offensive power is why team owner Robert Kraft is all-but begging tight end Rob Gronkowski to come out of retirement. And why the team was willing to take a chance on troublemaking receiver Antonio Brown, who lasted just one game before he was released.

But they keep winning.

“That was kind of the way that game went,” he said on a conference call with reporters on Monday. “It was kind of an old-fashioned, field-position game – not a lot of points, not a lot of scoring opportunities. We had a few more than they did.”

The defense continues to rank among the NFL’s all-time best.

The Patriots have allowed 108 points through 10 games, which would put them on pace for 173 in a full season. The NFL record for a 16-game season was the 2000 Baltimore Ravens, who allowed 165 points. The New England defense has only allowed nine touchdowns; the fewest in a 16-game season were the 16 allowed by the 1986 Bears and the 2000 Ravens.

The offensive line struggled to protect Brady, who had was held without a running or passing touchdown for just the second time this season. He was sacked once and hit six times.

New England wasn’t able to run the ball, either, gaining 74 yards on 22 carries, an average of 3.4 yards per attempt.

Jake Bailey punted eight times for an average of 47.6 yards, with six of the kicks pinning Philadelphia inside its 20.

“Jake’s had a great year for us and he continues to come in with some really big plays there,” Belichick said.

Also, the kicking game seems to have stabilized after losing longtime placekicker Stephen Gostkowski to a hip injury in Week 4. After Mike Nugent converted 5 of 8 field goal attempts in four games, Nick Folk has made every kick in the last two games: all five field goals and both extra points.

He connected on 35-, 22, and 39-yard field goals against Philadelphia.

The offense was 5 for 16 on third downs and scored just one touchdown on three trips inside the 20. The Patriots started near midfield three times and only managed one field goal on those drives, punting on back-to-back possessions after starting at their 48 in the third quarter.

Receiver Phillip Dorsett left the game with a head injury and did not return, a loss to the already thin receiving corps. Rookie N’Keal Harry made his debut and had three catches for 18 yards.

The Patriots host Dallas (6-4) on Sunday.