Lamar Jackson back at practice for start of Ravens' minicamp 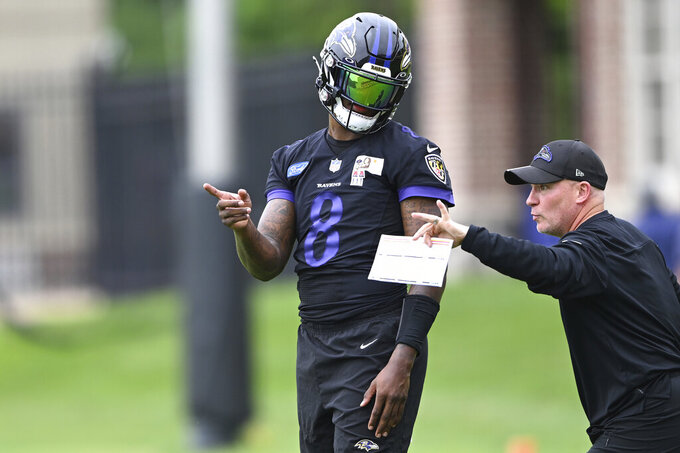 OWINGS MILLS, Md. (AP) — The Lamar Jackson-to-Mark Andrews connection — the linchpin of Baltimore's offense last season — is back on the field.

As expected, Jackson was at practice Tuesday when the Ravens began mandatory minicamp. He'd been absent during voluntary OTAs.

“He looked great,” said Andrews, the team's star tight end. “You could just tell his energy, just how he feels, I think he's extremely confident, and the more he's out here just running the plays, being around the guys, we're just going to get better and better. It was awesome to see my guy, for sure.”

Jackson is expected to talk to reporters Thursday, so that's when he'll surely be asked about his absence from previous practices and his still-uncertain contract situation. For now, the Ravens are simply happy to have him working with the rest of the team.

Jackson hasn't signed an extension with Baltimore as he enters his fifth-year option season. General manager Eric DeCosta has said the Ravens were working at Jackson's pace, and there hasn't been too much drama about it, but a star quarterback's decision to skip OTAs is always noteworthy.

That comes with the territory when you're the team's most important player.

“It's a different life when everything you do is looked at in a positive or negative light,” cornerback Marlon Humphrey said. “Whether it's Shannon Sharpe or Skip (Bayless) or this guy talking, Stephen A. (Smith). I know that would get annoying if I was in those shoes, but I think he handled it really well, being how much media attention he gets.”

Although Jackson was back, the Ravens are still waiting for a few more players who finished last season with injuries. Running backs J.K. Dobbins and Gus Edwards, who missed all of last season with knee injuries, were not at practice, and neither were cornerback Marcus Peters, tackle Ronnie Stanley, linebackers Tyus Bowser and David Ojabo, safety Ar'Darius Washington and defensive tackle Michael Pierce.

Harbaugh said Pierce's absence was because of a personal matter. He also said the team reached an injury settlement with defensive end Derek Wolfe.

The receivers and tight ends were all present, and the group of pass catchers for Jackson to throw to is a bit different this year. Baltimore traded wide receiver Marquise Brown on the first night of the draft, meaning Andrews and second-year receiver Rashod Bateman figure to be even more important now.

This week is a chance for Jackson to resume building chemistry with his key playmakers.

“He was physically in very good shape. I thought his arm looked really good. You can see he's been throwing a lot,” Harbaugh said. “It's great to have him out there. He kind of boosted everybody's spirits a little bit too. He's a competitor. He's mad about some passes here and there. The DBs were happy about some passes here and there. But it was good to see him. He threw some great balls.”

Kicker Justin Tucker had a GoPro device on his helmet. Longtime punter and holder Sam Koch retired this offseason, and the Ravens drafted punter Jordan Stout to replace him, so Tucker and Stout have a lot to work on.

“It wasn't my idea,” Harbaugh said. “It started on Stout's helmet. Tucker liked it, so he wanted one on his helmet too. Next thing you know, we're buying GoPros for everybody.”