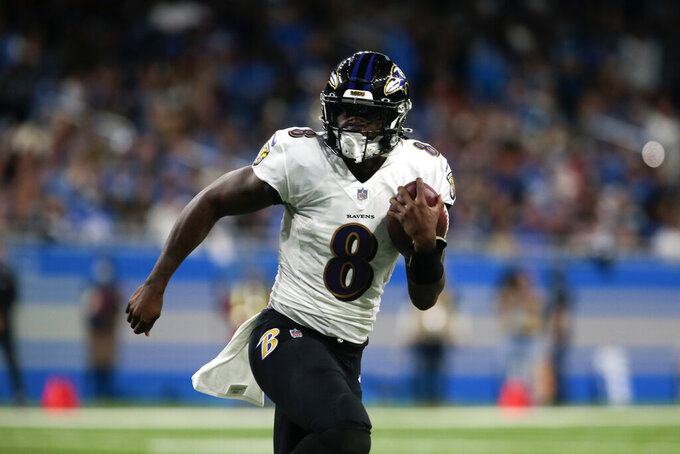 Baltimore Ravens quarterback Lamar Jackson (8) runs the ball against the Detroit Lions in the first half of an NFL football game in Detroit, Sunday, Sept. 26, 2021. (AP Photo/Tony Ding)

OWINGS MILLS, Md. (AP) — Lamar Jackson missed practice for the second straight day Thursday because of a back issue.

Jackson was listed on the Baltimore Ravens' injury report.

“He’s dealing with a little back flare-up,” offensive coordinator Greg Roman said before practice. "I don’t think it’s anything serious, but we’re just going to have to kind of wait and see. I think he’s going to be in good shape, but we’ll wait and see.”

Jackson held a typical interview session with reporters shortly before practice Wednesday, and there was no indication anything was wrong, but he was not on the field that day or Thursday during the portion of practice open to reporters.

Jackson threw for 287 yards in Sunday's victory at Detroit. The Ravens play at Denver this weekend.