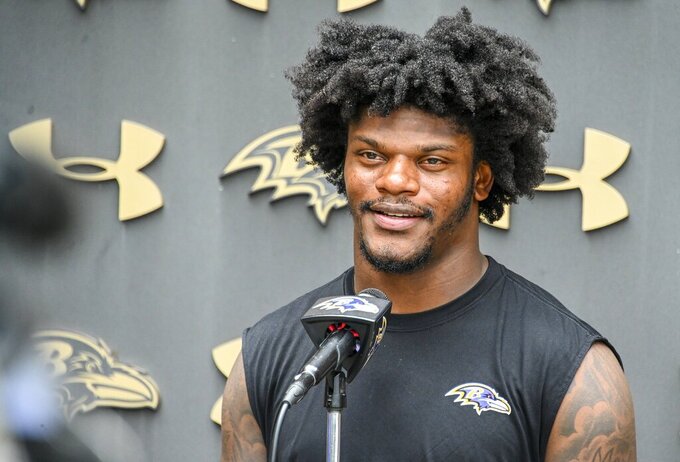 OWINGS MILLS, Md. (AP) — The clock is ticking for Lamar Jackson and the Baltimore Ravens.

The star quarterback said Wednesday that Friday would be the cutoff point at which negotiations for a contract extension would need to be set aside before the start of the regular season. He'd indicated previously there could be some sort of deadline, and that he hoped to have a deal done before the season, but now he's clarified the timetable he's working with.

“The end of this week,” Jackson said when asked when his deadline is. "Friday. Friday.”

Jackson didn't offer many more details about the status of contract talks, and that's consistent with his posture on the topic this whole offseason. He's entering his fifth-year option season, and after that, the Ravens can always use the franchise tag to keep him. So in theory it's not a big deal if extension talks drag on to next offseason — unless something happens to him this year like a major injury.

Jackson, who is representing himself in contract talks, didn't sound too concerned about that risk.

“It was a pretty big risk last season, the year before. I wasn’t thinking about contract negotiations around that time,” he said. “This season, it’s going to be the same thing.”

Jackson did go down with an ankle injury that caused him to miss the final four games of last season, but all indications are that the 2019 league MVP is at full strength entering Sunday's opener on the road against the New York Jets. It sounds as if Jackson's teammates are largely in the dark about how contract talks are progressing.

“He doesn’t really talk about it, so it hasn’t really been a distraction. I think it’s definitely interesting how it’s going, for sure, but nobody knows what’s going on,” cornerback Marlon Humphrey said. "Hopefully they can get done pretty soon here, but I have no doubt he’ll be here for his whole career, so I’m excited about that, being his teammate for a long time.”

While it may seem unlikely that the Ravens would lose Jackson after this season, it's still noteworthy that these negotiations aren't done yet, especially now that Kyler Murray — drafted a year after Jackson — has received his big new deal.

“It’s business, so it’s just been business the whole process,” Jackson said. “Just taking it a day at a time. Whenever we meet, we meet, stuff like that.”

“There’s nothing other than coming to something that’s mutually agreeable. That’s the way that all of these deals are done. So, obviously, I’m very hopeful, and I know everyone is really hopeful to get it done. But the focus remains on the football. Lamar’s that way, coaches and players are all that way.”

The Jets are planning to start former Baltimore standout Joe Flacco at quarterback this week, so if Jackson and the Ravens don't agree on an extension, the spotlight could quickly turn to other storylines. At the very least, the suspense about his contract figures to go on pause for a little while.

“Kickoff, I will not be talking about a contract,” Jackson said. “I’m thinking straight Jets around kickoff time.”

NOTES: The Ravens listed RB J.K. Dobbins (knee), CB Marcus Peters (knee) and T Ronnie Stanley (ankle) as limited in practice Wednesday. DT Travis Jones (knee) did not practice. “I told (Dobbins) I want him to slow down, but he’s looking pretty good,” Jackson said. “Hopefully he’ll be out in a couple weeks. I’m looking forward to that guy, and he’s very eager to play.”