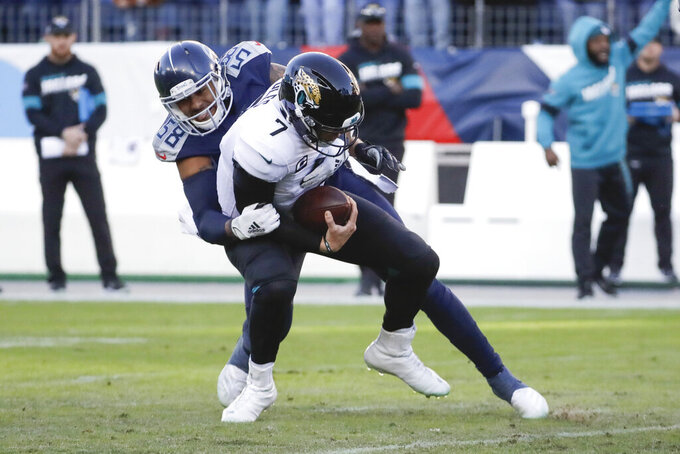 Jacksonville Jaguars quarterback Nick Foles (7) is sacked by Tennessee Titans linebacker Harold Landry (58) for an 8-yard loss in the first half of an NFL football game Sunday, Nov. 24, 2019, in Nashville, Tenn.(AP Photo/James Kenney)

NASHVILLE, Tenn. (AP) — Titans linebacker Harold Landry III flashes a knowing smile when asked how he sets up an offensive tackle before attacking with one of his pass rush moves.

Landry is not about to spill secrets to his success.

The second-year linebacker is piling up the sacks with a career-best eight already. He has had at least one in four straight games as Tennessee prepares to visit Indianapolis on Sunday.

“I don’t really want to say too much about that,” Landry said. “It is what it is. Guys just got to watch the film. I mean you don’t want to go out there and do your move right away. You try to get a feel for the game. You see it on film too. It all depends on what type of offensive tackle you’re going against. Some guys certain moves work on, certain guys that won’t work.”

Landry is tied for 12th in the NFL with a team-high eight sacks, quadrupling by himself the two sacks Tennessee’s starting linebackers managed together last season. Landry also has 16 quarterback pressures, four tackles for loss and an interception.

Being in the NFL for a second season certainly has helped Landry show just how much more comfortable he is.

“As you become more comfortable in your job, just like Harold) is, the confidence grows and ... gives you the opportunity to maybe be a little bit more aggressive,” titans coach Mke Vrabel said. “Knowing that if you make a mistake, it allows you to kind of take a few chances, and that’s what he’s done.”

Landry had been projected as a possible first-round pick for 2018 after a career-high 16 ½ sacks at Boston College in 2016, then an ankle injury limited him to five sacks and only eight games in his final season. The Titans traded up to No. 41 overall to draft the linebacker in the second round.

The 6-foot-2, 252-pound linebacker started three of 15 games as a rookie and finished with 4 ½ sacks. Then Landry, who ran the 40-yard dash in 4.64 seconds at the NFL combine, spent the offseason working to add more pass rush options beyond just his speed and ability to bend around offensive tackles on his way to quarterbacks.

“I think I’m way more developed with the use of my hands,” Landry said. “I think last year I just relied on one move, and that was just speed. This year I think I’m using my hands more active in my rush, using different moves, and I think that’s definitely helped me out this year.”

Defensive coordinator Dean Pees says Landry has worked hard to diversify his pass rush moves beyond being just a speed rusher. He also credited outside linebackers coach Shane Bowen and Vrabel for working individually with Landry on his pass rush.

Landry still can show off his speed. His last sack came on his first drive last week, racing around to sack Nick Foles for an 8-yard loss taking the Jaguars out of field goal range in a 42-20 loss.

The Titans will be leaning more heavily on Landry with veteran linebacker Cameron Wake now out for the season after being placed on injured reserve Tuesday. Landry has two sacks in three games against the Colts, including a sack and a recovered fumble in Tennessee’s 19-17 loss to Indy in Week 2.

Colts coach Frank Reich said Wednesday he’s been spending 95 percent of his time prepping for the Tennessee defense, and he’s been impressed by Landry.

“He’s doing phenomenal,” Reich said. “You got his strength and speed putting on at that level he’s just being very effective, and you can just tell he’s an instinctive player. So instinctive players you can put them anywhere and they know how to make plays.”