The Latest: 76ers' Scott talks about fight with Eagles fans 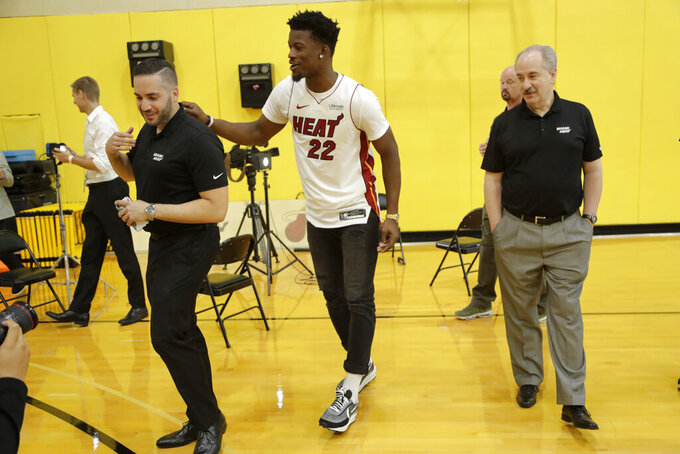 Miami Heat guard Jimmy Butler (22) jokes with Heat staff following an NBA basketball news conference, Friday, Sept. 27, 2019, in Miami. Butler spoke publicly for the first time since the July trade that brought him to South Florida as the new face of the franchise. (AP Photo/Lynne Sladky)

The Latest from NBA media days on Monday (all times EST):

Philadelphia 76ers forward Mike Scott says he should have walked away from a fight with Eagles fans earlier this month at the stadium parking lots.

Scott was involved in a fight with Eagles fans while tailgating outside the stadium after he wore a Washington Redskins jersey and hat to the party. Scott said Monday at the 76ers media day that he heard racial slurs that escalated the fight.

Scott says he definitely has "to be the bigger person. I definitely should have walked away. I didn't. He was talking crazy. He took it to the next level and I had to see if he's going to match the energy."

Scott stuck around after the incident and took selfies, and snapped photos from his seat at Lincoln Financial Field. Scott has become a popular player in the city for responding to invitations on social media and showing up to hang out with fans. He dropped in at wedding reception earlier in the summer.

He didn't hold any grudges against Philly sports fans and would continue to become a man-about-town. Scott also laughed off the parking lot fight.

Says Scott, "It's Philly. We had a brawl before noon."

Miami coach Erik Spoelstra spent part of his summer trying to build a relationship with new Heat wing Jimmy Butler, featuring phone calls and dinners and the sharing of ideas.

They get to work on the court for the first time Tuesday, when Miami opens camp — the first with Butler on the roster.

Spoelstra says "it was the fit that matters to us. That's the only thing that counts."

Butler is a four-time All-Star and Miami raves about what he can do both ends of the floor. Heat President Pat Riley says Butler is one of the 10 best players in the league, and Spoelstra says Butler "will not shy away from big moments. ... Jimmy Butler is that kind of player."

It took a four-team trade to get the deal that brought Butler to Miami done in July. The Heat gave up Josh Richardson (to Philadelphia) and Hassan Whiteside (to Portland) to make it happen.

The NBA offseason is now over for everyone.

The vast majority of the league's media days are taking place Monday, with 23 teams gathering for the season's first official day of work. The six teams that are headed overseas for preseason games held media days on Friday and Saturday, with the Los Angeles Clippers going on Sunday in advance of their training-camp trip to Hawaii.

Golden State is among the teams having media day Monday, its first formal day of work at the team's new Chase Center home in San Francisco. NBA MVP Giannis Antetokounmpo and the Milwaukee Bucks also have media day Monday.

Monday also marks the start of the preseason, with Houston playing host to the Shanghai Sharks.