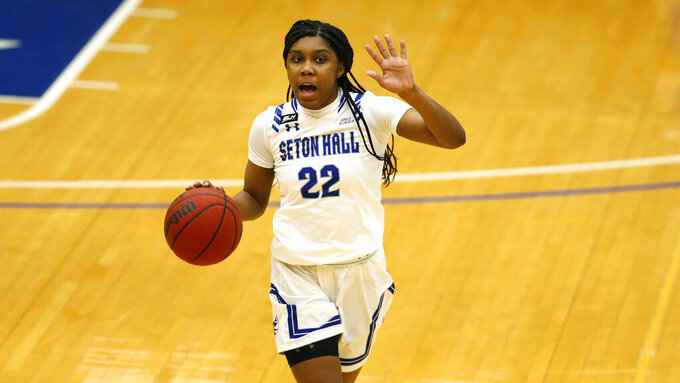 Seton Hall guard Amari Wright (22) dribbles the ball against UConn during the first half of an NCAA basketball game on Tuesday, Dec.15, 2020, in South Orange, N.J. (AP Photo/Noah K. Murray)

The IIHF says the Germans will all remain in quarantine until Thursday. The country is scheduled to open the tournament against Finland on Christmas.

Germany, with a roster that includes Ottawa Senators prospect and 2020 No. 3 overall draft pick Tim Stuetzle, will miss exhibition games against Austria and the Czech Republic ahead of the annual under-20 event.

The IIHF also said two members of Sweden’s team staff tested positive. The Swedes will stay in quarantine until Monday. Sweden is scheduled to face Canada in an exhibition game Monday.

The IIHF says over 2,000 tests have been conducted on players, staff and game officials since entering the Edmonton bubble Sunday. Teams without positive tests were eligible to begin training Friday.

Florida State’s football game Saturday at Wake Forest has been canceled because a positive test and contact tracing left the Seminoles without enough offensive linemen to play.

Florida State finished the season 3-6 overall and 2-6 in the Atlantic Coast Conference. Wake Forest is 4-4 overall and 3-4 in the ACC.

The canceled game was a late addition to the schedule after the conference juggled postponements and make-up games.

Wake Forest saw games against Duke, Miami and Notre Dame fall off the schedule. Florida State had matchups against Clemson (Nov. 21) and Virginia (Nov. 28) called off the day of the games due to coronavirus concerns. The ACC eventually swapped the Seminoles’ Dec. 5 trip to Duke for last weekend’s home game with Duke and added the trip to Wake Forest.

Middle Tennessee has canceled its next two games in what had been scheduled as a home-and-home set with Bellarmine because of positive COVID-19 test results and contact tracing in the Blue Raiders’ program.

The Blue Raiders (2-4) had been set to visit Bellarmine on Saturday with Bellarmine visiting Middle Tennessee on Monday night. But both games now have been canceled with Middle Tennessee having positive COVID-19 test results and contact tracing affect the program for the second time this season.

Middle Tennessee had its season opener against Akron canceled due to COVID-19 issues inside the Zips’ program. That cut Middle Tennessee’s slate at the Gulf Coast Showcase from three games to two.

The Blue Raiders now are schedule to open Conference USA play Jan. 1 at Florida Atlantic for their next game.

The team said those who tested positive have been isolated and others in the program have been placed in quarantine.

Washington announced it will not pursue a bowl bid after a COVID-19 outbreak kept the Huskies (3-1) from playing their regular-season finale against Oregon and the Pac-12 title game against USC.

The school said the decision was for medical reasons. Washington’s opt out of the bowl season leaves the Pac-12 with only three teams available to play in the postseason: Southern California, Oregon and Colorado.

Utah, UCLA and Stanford have also said they will not participate.

The Big East announced Friday that a Dec. 30 game between St. John’s and No. 7 Villanova has been postponed.

Earlier this week, Villanova’s game Saturday against No. 17 Virginia at Madison Square Garden was postponed due to a COVID-19-related pause by the Cavaliers. The Wildcats plan to fill that date with a home game against Saint Joseph’s — a makeup of a Nov. 30 game postponed due a positive coronavirus test on the Hawks.

“We just thought our players needed a break,” Villanova coach Jay Wright said. “Their well-being is our top priority. We appreciate that St. John’s is in agreement with us on this in wanting the same for their players.”

No makeup date has been announced.

“My temperature this morning was 97.5. I look forward to returning to the booth as soon as possible,” he said.

Mike Tirico will take Michaels’ place in the booth. Tirico was to have called the NFL Network’s Saturday night game between the Carolina Panthers and Green Bay Packers, but Fox’s Joe Davis will step in.

For the second time this season, the Seton Hall women's basketball team is on pause because of the coronavirus. The Pirates' games against Marquette on Saturday and Georgetown on Tuesday have been postponed.

Seton Hall saw the start of its season delayed when the school had to pause on Nov. 20 because of COVID-19. The Pirates had to cancel their first three games. They played No. 3 UConn on Tuesday and lost 92-65.

The Huskies said in a statement that no one from their program was in close contact with the individual who tested positive at Seton Hall.

An unnamed Rams player tested positive Thursday, and five players missed practice. Scott and Evans went on the reserve/COVID-19 list Friday, while linebackers Justin Hollins and Ogbo Okoronkwo and center Brian Allen stayed away from the training complex while the Rams conducted a walkthrough.

Scott is a core part of the Rams’ special teams units, and he had played 130 snaps on defense over the past five games since Los Angeles’ bye. Evans has had one snap on offense all season.

Hollins, Okoronkwo and Allen are all expected to be eligible to play Sunday, coach Sean McVay said.

Charlotte men’s basketball coach Ron Sanchez will miss the 49ers’ next two games as a result of contact tracing related to the COVID-19 virus, the school announced.

Sanchez will not be available for Saturday’s home game against North Carolina A&T and the Dec. 22 game at George Washington.

Utah’s game Saturday against Washington State will wrap up the Utes’ season.

The school said Friday the players have decided to opt out of any potential bowl game. The Utes would become bowl eligible with a victory over the Cougars.

Utah (2-2) has won its last two games, including a 38-21 victory at Colorado last Saturday.

Iowa football coach Kirk Ferentz has tested positive for COVID-19. The school says the 65-year-old does not have symptoms and will remain at home in isolation until Dec. 27.

Iowa’s game this weekend with Michigan already had been postponed because of the lingering effects of the Wolverines’ outbreak.

Ferentz is the 23rd FBS coach to reveal publicly that he tested positive for the virus. Others include Alabama’s Nick Saban and Ohio State’s Ryan Day, both missing games.