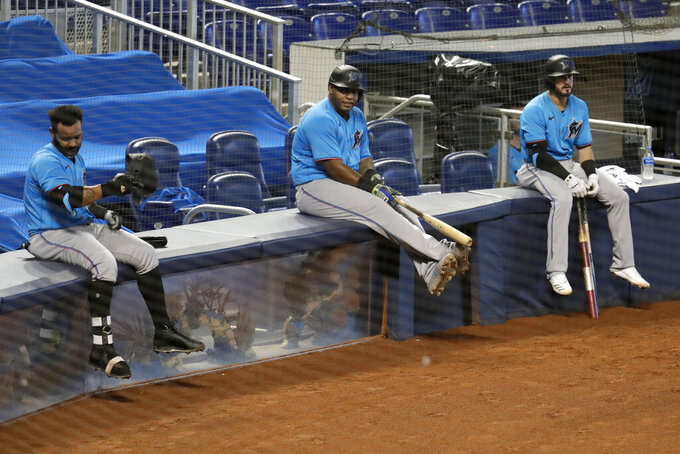 FILE - In this July 12, 2020, file photo, Miami Marlins' Jonathan Villar, left, Jesus Aguilar, center, and Jon Berti wait to bat during a baseball scrimmage at Marlins Park in Miami. Marlins CEO Derek Jeter blamed the team's coronavirus outbreak on a collective false sense of security that made players lax about social distancing and wearing masks. Infected were 21 members of the team's traveling party, including at least 18 players. None is seriously ill, Jeter said Monday, and he expects all to return this season. (AP Photo/Lynne Sladky, File)

A person who was briefed on the NCAA Board of Governor’s discussions told the AP that board members decided each division will determine whether to stage championship events in fall sports.

The person spoke to the AP on condition of anonymity because the board was not making its discussions and plans public.

The Board of Governors, the NCAA’s highest governing body, was considering canceling or postponing fall sports championships in all three divisions during Tuesday’s meeting.

“In order to ensure the health and well being of college athletes, we have to consider all the implications when determining our next steps, and we plan to provide an update to our membership and the public (Wednesday),” NCAA President Mark Emmert said in a statement.

The Miami Marlins are scheduled to end an eight-day hiatus with a game at Camden Yards, although getting to that point has not been easy.

Major League Baseball released a statement around three hours before the scheduled 7:35 p.m. start Tuesday, saying the game “may be delayed as we await the final test results clearing the Marlins to resume play.”

The Marlins finally got cleared to play and arrived at the ballpark after 5 p.m, but by 6:15 the teams still had not agreed on a starting time.

When he woke up, Orioles manager Brandon Hyde wasn't certain if the game would be played at all.

He said, “I got word there were issues with the test and we were going to be put on hold."

Miami hasn’t played a game since July 26. After that series against the Phillies, the Marlins’ season was suspended because of a coronavirus outbreak on the team. At least 18 players, and 21 in the traveling party, tested positive.

Tuesday night’s game is a makeup from July 29, which was supposed to be Baltimore’s home opener. The Orioles instead played the New York Yankees.

— Reporting by Steven Wine in Miami.

The Detroit Lions removed quarterback Matthew Stafford from the COVID-IR list and said he received a false positive test result.

The list was created for players who either test positive for COVID-19 or have been in close contact with an infected person. Stafford was listed on it Saturday, but the team said Tuesday his testing sequence for the pre-entry period was: negative, negative, false positive — then the next three tests were all negative.

“To be clear, Matthew does NOT have COVID-19 and never has had COVID-19 and the test in question was a False-Positive,” the team said in a statement. “Also, all of Matthew’s family have been tested and everyone is negative.”

Minnesota is the latest state to delay high school football competition because of the coronavirus concerns.

The Minnesota State High School League voted Tuesday to move football and volleyball competition to a newly created fourth season likely to run from mid-March to mid-May. The normal spring sports would move to a window likely from mid-May to mid-July.

The MSHSL also decided at a virtual board meeting that soccer and individual fall sports — including cross country, girls tennis and girls swimming and diving — can start practice on time on Aug. 17. All seasons for the upcoming school year will be shortened.

Football teams will play six regular-season games, down from eight, with a decision on postseason play to be made later. Minnesota became the ninth state to delay its high school football season, the Star Tribune reported.

Competitive high school sports in Minnesota have been on hold since March when the COVID-19 pandemic hit the state. This summer, the league has allowed for team workouts within recommended health guidelines.

Linebacker Skai Moore has become the first Indianapolis Colts player to opt out of playing the 2020 season because of the coronavirus.

NFL players have until Thursday at 4 p.m. EDT to say they are skipping the season. Nearly 50 players have done so.

Moore has been a backup linebacker and special teams player the last two seasons for Indy. He appeared in a total of 10 games over those two seasons.

The start of Southeastern Conference football practices has been pushed back 10 days to Aug. 17.

The league announced a new preseason practice schedule on Tuesday after previously announcing that SEC teams would play only league games and pushing the season start back to Sept. 26.

The new league-wide calendar allows for more days off and fewer practices than permitted under NCAA rules. From Aug. 7-16, teams are allowed to conduct up to 14 hours weekly of strength and conditioning, meetings and walkthroughs.

Starting Aug. 17, they can hold 25 practices with a limit of 20 hours per week of practice time. Coaches must allow two days off each week until game week.

Cleveland Browns defensive tackle Andrew Billings has opted out of the 2020 season because of coronavirus concerns.

Billings signed a one-year free-agent contract with Cleveland in March after spending three seasons with the Cincinnati Bengals. The 6-foot-1, 328-pounder was going to give the Browns some size and depth up front.

Billings is the third Cleveland player who has chosen not to play, following guard Drew Forbes and tackle Drake Dorbeck.

Players have until Thursday at 4 p.m. to notify teams if they’re choosing to opt out.

A fourth-round pick in 2016 from Baylor, Billings sat out his rookie season with a knee injury but he’d been one of Cincinnati’s most consistent interior linemen the past three years.

The Sun Belt Conference will keep its eight-game league football schedule and allow its members to play up to four nonconference games this season.

The conference’s 10 members had 12 games scheduled against Power Five conference opponents, but with those leagues eliminating almost all of their nonconference games, Sun Belt schools have lots of holes in their schedules.

The conference said it plans to start playing league games over Labor Day weekend and members can begin nonconference games as soon as Aug. 29.

Texas State already has announced it has moved its home game against SMU in San Marcos, Texas, to Aug. 29.

The Madrid Open, a joint men's and women's tennis tournament, has been canceled.

Organizers say the tournament will not take place at its rescheduled slot in September “following strong” recommendations made by local authorities “in view of the current situation caused by COVID-19.”

The event was originally scheduled to be played in May.

The Jacksonville Jaguars have cleared starting quarterback Gardner Minshew from the COVID-19 list.

Minshew spent the last two days in mandatory quarantine after being in close contact with someone infected. Safety Andrew Wingard also was activated from the COVID-19 list Tuesday. Minshew, Wingard and receiver Michael Walker are roommates in Jacksonville and have been for more than a year. Walker remains on the list.

Jacksonville had an NFL-leading dozen players on the COVID-19 list Monday, with most of them being rookies and second-year players like Minshew, Wingard and Walker.

The Jaguars are expected to hold their first training camp practice next Wednesday.

Bayer Leverkusen says midfielder Nadiem Amiri will miss its Europa League last-16 game against Rangers on Thursday after he had contact with someone believed to have the coronavirus.

The club says Amiri reported the “short-term” contact in his private life himself and is isolating at home for a week as a precaution.

Leverkusen managing director sport Rudi Völler says in a statement that “Nadiem’s behavior is exemplary and important. Precisely because infection numbers are rising again in Germany, it’s an example of a serious and responsible approach to the pandemic.”

Leverkusen takes a 3-1 lead from the first leg in March when it hosts Rangers on Thursday.

Amiri has played 41 games for Leverkusen this season across all competitions.

A preseason friendly between French soccer clubs Marseille and Montpellier has been canceled due to a suspected case of coronavirus.

The clubs said in a joint statement that Wednesday’s match at Stade Velodrome in Marseille was scrapped as a measure of precaution.

According to regional newspaper Midi Libre, a Montpellier player whose identity was not revealed is suspected to have caught the virus. The player, who was tested with the whole team on Monday, will undergo another test this week, the newspaper said.

Montpellier had been forced to cancel another preparation match last month after a player from local rival club Sete was diagnosed with the virus.

The French league is to start on Aug. 21.

The German men’s ice hockey league will start its new season in November, more than eight months after the coronavirus stopped play.

The league says its clubs agreed on the Nov. 13 date to begin the 2020-21 season and they’re drawing up plans to have fans in the arenas, subject to approval from German authorities.

The league played its last games on March 8 and was suspended with the regular season complete and the playoffs due to begin. The season was canceled and no champion was declared.

Hockey has been slow to return in Germany because the league and clubs rejected the option of playing in empty arenas. They argued that they would lose money by hosting games without fans.

The league says there will be a “preparation tournament with all 14 clubs in the lead-up to the season” but dates and locations are yet to be confirmed.

A soccer player who deliberately coughs close to another player or match official can be issued a red card.

The International Football Association Board, the game’s lawmaker, updated its guidelines while the pandemic perseveres.

A referee can only red card a player when they are certain the cough is intentional. A yellow card is also optional.

The new rule falls under “using offensive, insulting or abusive language and/or gestures.”

IFAB said in a statement: "As with all offenses, the referee has to make a judgment about the true nature of the offense.

"If it were clearly accidental, then the referee would not take action nor if the ‘cough’ took place with a large distance between the players.

“However, where it is close enough to be clearly offensive, then the referee can take action."

Cricket Australia has postponed a Twenty20 series against the West Indies scheduled for October.

Australia and the West Indies were set to play games in Queensland state from Oct. 4-9 as warm-ups for the Twenty20 World Cup in October and November. But the International Cricket Council has already pushed the men’s T20 World Cup back by a year — to be held either in Australia or India.

Cricket Australia says, “In light of this development, and given the preference to host the warm-up three-match T20 series against the West Indies to coincide with the rescheduled T20 World Cup in Australia, it has been agreed to postpone the matches.”

The series also would have overlapped with the Indian Premier League which has been rescheduled to be in the United Arab Emirates from Sept. 19-Nov. 10, pending government approval. The lucrative IPL usually attracts players from all over the world, including many stars from the Caribbean and Australia.