The Latest: Calais Campbell chosen NFL Man of the Year 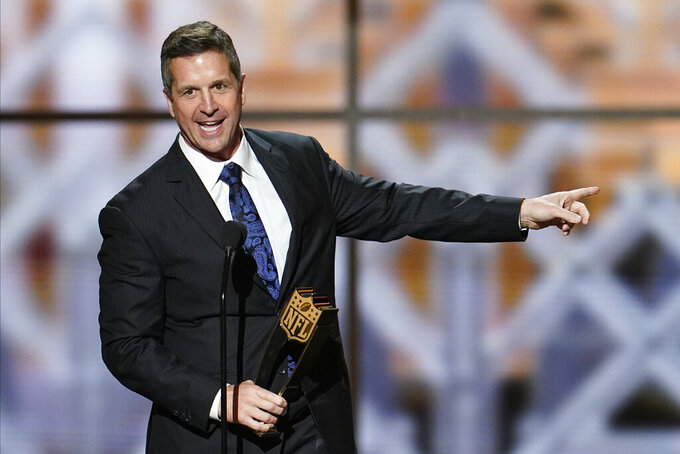 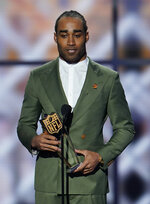 MIAMI (AP) — The Latest on the NFL Awards, all times EST:

Eli Manning, a former winner who just retired as quarterback of the New York Giants, presented the award at NFL Honors.

The award recognizes an NFL player for outstanding community service activities off the field, as well as excellence on the field. First established in 1970, the national award was renamed in 1999 after the late Hall of Fame Chicago Bears running back.

In 2009, Campbell formed the CRC Foundation alongside his mother Natea and has engaged in numerous charitable initiatives throughout his 12-year NFL career. The CRC Foundation, named for his late father, Charles, who passed away in 2003, is committed to the enhancement of the community through the teaching of critical life skills to young people. Through sports, creative talents, vocational skills, financial skills and quality health and nutrition, the CRC Foundation is dedicated to developing young people into empowered and self-aware leaders for the future.

Lamar Jackson joins Tom Brady as the only unanimous choices for The Associated Press NFL Most Valuable Player award.

Jackson's spectacular season drew all 50 votes from a nationwide panel of media members who regularly cover the league. Baltimore's All-Pro set an NFL record for yards rushing by a quarterback (1,206) and led an offense that compiled more yards on the ground (3,296) than any in league history. The Ravens won their final 12 games of the regular season to finish at 14-2, the league's best mark.

With his speed, agility and seeming sixth sense for how to avoid tacklers, Jackson was unchallenged as the MVP choice, just as New England's Brady was in 2010. And like Brady back then, neither won a Super Bowl; the Ravens were eliminated in the divisional round by Tennessee.

Jackson is the first Raven to win the award and the seventh consecutive quarterback. The award was announced at NFL Honors.

Michael Thomas has become only the second wide receiver to win The Associated Press NFL Offensive Player of the Year award.

The Saints wideout is in good company: The other receiver to take the honor was Hall of Famer Jerry Rice in 1987 and 1993.

While Rice holds virtually all of the significant NFL receiving records, Thomas has one that made a huge difference with the 50 voters from a nationwide panel of media members who regularly cover the league. Thomas caught a league-record 149 passes for 1,725 yards and nine touchdowns. He also played five games without regular quarterback Drew Brees, yet made 42 catches in those outings.

Thomas edged Ravens quarterback Lamar Jackson 19 votes to 17 in balloting announced at NFL Honors. Panthers running back Christian McCaffrey was third with 12, followed by quarterbacks Russell Wilson of Seattle and Patrick Mahomes of Kansas City with one each.

For leading the Baltimore Ravens to the NFL's best record, including a 12-game winning streak to end the regular season, John Harbaugh has won The Associated Press NFL Coach of the Year award.

Harbaugh. whose brother Jim was Coach of the Year in 2011, guided Baltimore to a 14-2 record. The Ravens compiled more yards on the ground (3,296) than any team in league history, and Lamar Jackson set a mark for rushing yards by a quarterback.

Harbaugh earned 27 1-2 votes, nearly double what San Francisco's Kyle Shanahan received in balloting by 50 members of a nationwide media panel who regularly cover the league. It's the first top coaching honor for a Raven. Harbaugh just concluded his 12th season in charge.

The award was announced at NFL Honors.

Baltimore coordinator Greg Roman, who oversaw one of the most dynamic offenses in league history, has been chosen The Associated Press NFL Assistant Coach of the Year.

The first Ravens coach to win the award, Roman dominated his field the way his quarterback, Lamar Jackson, ran through and around opponents this season. Roman received 41 votes from a nationwide panel of 50 media members who regularly cover the league. Next closest was San Francisco defensive coordinator Robert Saleh with three votes.

Roman has worked for five NFL teams and this is his second stint in Baltimore. The Ravens gained more yards on the ground (3,296) than any team in league history, and Jackson set a mark for rushing yards by a quarterback. Baltimore went 14-2 in the regular season, the NFL's best record.

The award winner was announced at NFL Honors.

Top overall draft pick Kyler Murray has joined such other No. 1 overall selections as Earl Campbell and Cam Newton as The Associated Press NFL Offensive Rookie of the Year.

The fast, elusive and creative quarterback is the sixth man to start off the NFL draft and then win the best offensive rookie honor since the 1970 merger. Newton is the most recent, in 2011, one year after Sam Bradford did it. The others were running backs Campbell (1978), Billy Sims (1980) and George Rogers (1981).

That earned him 26 1-2 votes in balloting by 50 members of a nationwide media panel that covers the NFL. Murray easily outdistanced Oakland running back Josh Jacobs, who had 13. Tennessee wide receiver A.J. Brown had 9 1-2 votes, and the other selection went to Philadelphia running back Miles Sanders.

Murray is the second Arizona Cardinal and fourth player in franchise history to win the award. Receiver Anquan Boldin took it in 2003, while running backs Ottis Anderson in 1979 and Johnny Roland in 1966 won it.

Results were announced at NFL Honors.

Nick Bosa was such a force on the edge of the 49ers' line that he even received votes for the All-Pro team at a very competitive position.

Bosa drew lots more votes for The Associated Press NFL Defensive Rookie of the Year award, winning the honor in a rout. The second overall draft selection out of Ohio State earned 43 ballots from a nationwide panel of 50 media members who regularly cover the league. Next closest was a player across the bay, Oakland defensive lineman Maxx Crosby with four.

Bosa's nine sacks were the fourth most for a 49ers rookie. He was third in the NFL with 68 pressures, according to SportsInfo Solutions, trailing only Cameron Jordan and Danielle Hunter, and his 16 tackles for loss tied him for fifth in the league.

In probably his best game, Bosa had three sacks and an interception against Carolina, joining Kevin Williams (2003) and Julius Peppers (2002) as the only rookies to achieve that.

Bosa is the fourth 49er to win the award. Linebacker Patrick Willis (2007), linemen Dana Stubblefield (1993) and cornerback Bruce Taylor are the others.

Ryan Tannehill's career was in jeopardy after the 2018 season. His turnaround with the Tennessee Titans was so strong that he has won The Associated Press NFL Comeback Player of the Year award.

Tannehill spent the first six seasons as a mostly mediocre and sometimes injured quarterback in Miami. Though he helped the Dolphins get to the 2016 playoffs, he never lived up to being the eighth overall choice in the 2012 draft.

He landed in Nashville this season as a backup to Marcus Mariota. But with the Titans floundering on offense, he quickly replaced Mariota and led Tennessee to a wild-card playoff berth.

Tannehill topped the league in passer rating (117.5) and threw for 22 touchdowns with six interceptions. Such work gave him the slimmest of margins over San Francisco QB Jimmy Garoppolo in balloting by a nationwide panel of 50 media members who regularly cover the league.

The first Titan to win the award and the 12th quarterback — Chad Pennington took it twice — Tannehill drew 16 votes to 15 for Garoppolo. Oakland tight end Darren Waller was next with eight votes, and Dallas center Travis Federick received six in balloting announced at NFL Honors.

New England's Stephon Gilmore has become the first cornerback in a decade to win The Associated Press NFL Defensive Player of the Year award.

Considered one of the game's best cover cornerbacks, the All-Pro made his eight pro season his best with a career-high six interceptions that tied for the NFL lead. Gilmore was a key member of the league's stingiest defense in 2019; New England allowed 225 points in winning an 11th straight AFC East title.

Oakland's Charles Woodson was the last cornerback to take the award, in 2009.