The Latest: Charges in stabbing of ex-OSU QB Terrelle Pryor 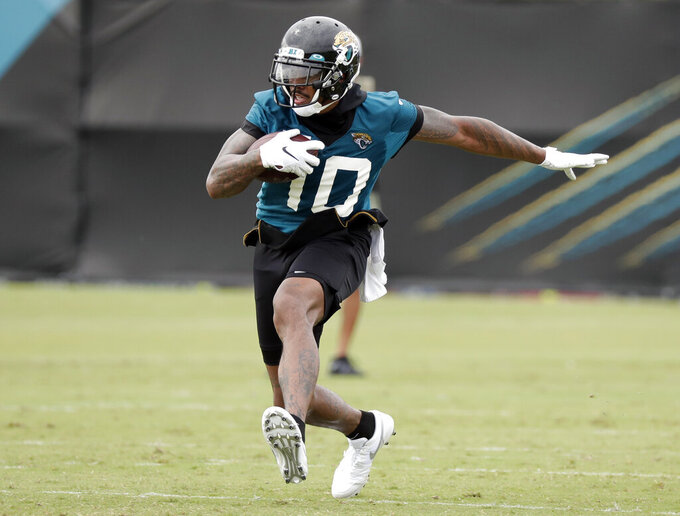 FILE - In this July 26, 2019, file photo, Jacksonville Jaguars wide receiver Terrelle Pryor Jr. (10) runs after a reception during NFL football practice at the team's training facility in Jacksonville, Fla. Allegheny County, Pa., District Attorney spokesman Mike Manko confirmed Saturday, Nov. 30, 2019, that Pryor, a free agent, was the victim of a stabbing, but said he had no other information, such as Pryor’s condition or where and when the stabbing occurred. (AP Photo/John Raoux, File)

Authorities say a woman has been charged with attempted homicide in a stabbing in Pittsburgh that critically injured ex-Ohio State quarterback Terrelle Pryor, who also faces a charge.

Pittsburgh police say the 30-year-old Pryor arrived at a hospital early Saturday following a dispute at an apartment.

Police said they are believed to be “mutual combatants” and said there would be no further comment.

An agent for Terrelle Pryor says the NFL wide receiver’s family has been told he is expected to make a full recovery after being stabbed.

Gregory Diulus of Vantage Management Group said Saturday that relatives are with Pryor at the hospital.

Allegheny County District Attorney spokesman Mike Manko confirmed Saturday that Pryor was the victim of a stabbing. Manko said he had no other information, including where and when the stabbing occurred.

Pryor, a former Ohio State quarterback, has played for teams including the Buffalo Bills, New York Jets, Washington Redskins and Cleveland Browns. He most recently signed with Jacksonville but was waived in September after a hamstring injury.