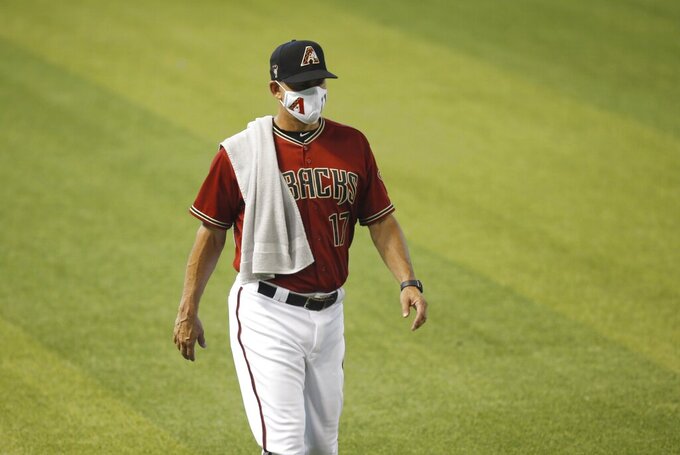 Lovullo added that Calhoun is asymptomatic and feels good. The 32-year-old Calhoun signed a $16 million, two-year deal in the offseason after playing his first eight seasons with the Los Angeles Angels.

He hit a career-high 33 homers last season and is expected to bat in the middle of Arizona's lineup in 2020.

The Diamondbacks have revealed three players on the 40-man roster who tested positive for COVID-19. The others were relief pitchers Junior Guerra and Silvino Bracho.

Arizona outfielder David Peralta was back on the field Monday after missing the first three camp workouts because he was feeling sick. He said he took four COVID-19 tests over the last week and all of them came back negative. Peralta homered and singled in Monday’s intrasquad game.

Toronto and Edmonton, Alberta, have been selected as the NHL’s hub cities to host the qualifying round and at least the first two playoff rounds of the league’s 24-team expanded playoff format, a person with direct knowledge of the decision tells The Associated Press.

The person spoke on the condition of anonymity because the league and the NHL Players’ Association have not released this information, which was included in the tentative return to play agreement reached Monday. Should the proposal be ratified by both sides, teams would travel to both cities on July 26 for exhibition games, followed by the preliminary rounds starting on Aug. 1 to determine the 16-team playoffs and their seeding.

The person said the league is in part being cautious and allowing itself flexibility in the event of potential spikes in COVID-19 infections in not yet determining which cities will host the conference finals and Stanley Cup Final.

The San Francisco Giants say two more people with the team are positive for the coronavirus following intake testing.

The Giants did not specify whether the two are players, coaches or other staff.

“The impacted individuals have been placed in self-isolation and will continue until MLB protocols for discontinuing isolation have been satisfied, including clearance by the Giants medical staff,” the team said in a statement Monday. “Contract tracing for both was conducted and resources and protocols are in place to ensure these individuals receive the best medical care.”

The U.S. Tennis Association has canceled all five ITF World Tennis Tour events that were scheduled for the U.S. in August.

The ATP and WTA Tours are scheduled to resume next month and the USTA is holding the U.S. Open as scheduled without fans, beginning Aug. 31.

But the organization said it was canceling the lower-tier events to ensure the health and safety of those involved with them.

FC Dallas has withdrawn from the MLS is Back tournament in Florida after 10 of its players tested positive for the coronavirus.

Major League Soccer says that of the 557 players sequestered at a pair of Walt Disney World hotels, 13 have tested positive. Ten of them play for Dallas, two for Nashville and one for Columbus. None of the players was named.

Because of the number of players involved, it was determined that FC Dallas could not continue in the tournament.

MLS is devising a new schedule for the monthlong tournament, which is being played without fans at ESPN’s Wide World of Sports Complex.

The National Hockey League and NHL Players’ Association have reached a tentative agreement to return to play this season and extend the collective bargaining agreement.

The four-year extension of the CBA finalized Monday, coupled with the sides’ agreement on protocols for training camps and games, paves the way for hockey to resume this summer. Training camps would open July 13 and games would resume Aug. 1 if approved by the league’s board of governors and players’ executive committee and full membership.

Fordham's football game against Hawaii on Sept. 12 has been canceled because of the coronavirus pandemic.

The Rams have now canceled their first three games. A school spokesman said Fordham will announce later this week whether the entire fall season will be canceled or potentially moved to the spring.

Fordham is a football-only member of the Patriot League, whose Council of Presidents announced last month a guidance plan for fall competition. One of the key provisions of that plan was that "No Patriot League teams will fly to competitions and, with rare exceptions, regular season competition will exclude overnight travel.”

The Rams were supposed to open the season against Stony Brook on Aug. 29 and then host Bryant on Sept. 5 before heading to Hawaii.

Texas Rangers slugger Joey Gallo has tested positive for the coronavirus, though the team said the All-Star right fielder is asymptomatic.

General manager Jon Daniels said Monday that Gallo is isolated at his apartment in Dallas and not around teammates. Daniels said Gallo told him that he feels as good as he ever has.

Gallo initially took a saliva test as part of the team’s intake process June 27, and got a positive result two days later. The 26-year-old Gallo took a nasal swab test on June 30 which came back negative, but then had another saliva test that came back positive Sunday.

After being one of the local players that had been able to work out at the Rangers’ new ballpark the past several weeks, Gallo has missed the first four days of summer camp at Globe Life Field, including Monday. Daniels had said Sunday that Gallo was still in intake testing.

Gallo has 110 career homers in his 418 big league games. After consecutive 40-homer seasons, he had 22 homers in 70 games last season and was an All-Star before right wrist surgery. He homered in the All-Star game.

England rugby will lay off 139 positions because it expects to lose 107 million pounds ($134 million) in revenue in the short term.

The Rugby Football Union will begin consulting with staff before announcing the redundancies at the end of August, chief executive Bill Sweeney said on Monday.

“To ensure we have a sustainable RFU we have announced to colleagues that it is proposed that the total number of roles across the organisation will reduce by 139,” he wrote on the union website.

“We have already made some significant cost savings. We furloughed 60% of our organisation; implemented a three-month pay reduction which has been extended for some; introduced pension pauses; and refined business planning and introduced stadium and office running efficiencies to reduce costs.

“Unfortunately, this is not enough to run a sustainable operation and safeguard our future.”

Sweeney predicts it will take five years for the RFU to recover, and the union will lose 20% of its normal revenue over that period.

Frances Tiafoe will not play in the World TeamTennis season after testing positive for the coronavirus.

The American was playing in a weekend tournament in Atlanta and was tested after feeling symptoms during his match on Friday. He withdrew from the event the following day and said he was following the recommended quarantine protocol.

He was set to play for the Washington Kastles during the World TeamTennis season, set for July 12 to Aug. 2. It’s being played entirely at The Greenbrier in West Virginia because of the pandemic, instead of around the country as usual.

Under league rules, a player had to test negative before being allowed to travel to the resort. The league announced Monday that because Tiafoe’s positive test was within the advance travel window, he was ineligible to compete this season.

Tiafoe, a quarterfinalist at the 2019 Australian Open, will not be paid for this season.

Atlanta Braves outfielder Nick Markakis has opted out of the 2020 season.

The 36-year-old Markakis said he was uneasy about playing the season without fans and then was swayed by his telephone conversation with teammate Freddie Freeman, who has tested positive for COVID-19 and has fever and other symptoms.

“Just hearing him, the way he sounded on the phone, it was tough,” Markakis said Monday. “It was kind of eye-opening. What everything that’s going on, not just with baseball but all over the world, it makes you open your eyes.”

Markakis became the second Braves player to opt out. Over the weekend, pitcher Félix Hernández said he wouldn't play this year.

Dodgers pitcher David Price, Washington infielder Ryan Zimmerman and Colorado outfielder Ian Desmond are among the other players who have opted out.

Following nine seasons with Baltimore, Markakis was entering his sixth season with Atlanta. He was competing for a spot in a crowded Braves outfield following the offseason signing of Marcel Ozuna.

Manager Brian Snitker plans to play Ozuna and Ronald Acuña Jr. every game, though Ozuna could be the designated hitter. Markakis, Ender Inciarte, Adam Duvall and others were competing other spots and were joined by rookies Cristian Pache and Drew Waters.

Count the Tennessee Titans among the NFL teams offering season-ticket holders the option of opting out of this season and putting that money toward 2021 or getting a refund.

The Titans sent a letter to their season-ticket holders Monday. The team also posted a notice on its website.

Team officials will be working with state and local governments on how many fans will be allowed to attend games at Nissan Stadium, which seats approximately 69,143.

But the Titans say the coronavirus pandemic makes it “increasingly likely” that NFL teams will be playing in front of fewer fans this season.

The National Hockey League says 35 total players have tested positive for the coronavirus over roughly the past month.

The league says 23 of 396 players checked for COVID-19 at team facilities have tested positive since voluntary workouts began June 8, a 5% rate. In that same period of time, it is aware of 12 additional positive test results.

The NHL and NHL Players’ Association on Sunday night agreed on protocols to start training camps and resume the season. That includes daily testing once games get under way for players, coaches and staff.

Resuming is contingent on each side approving an extension of the collective bargaining agreement and the return to play agreement.

Counsell says both players are asymptomatic.

This marks the second setback for Urias since the Brewers acquired him from San Diego in November. Urias, who is expected to compete with incumbent Orlando Arcia for the starting shortstop job, underwent surgery in January to repair a broken bone in his left hand.

Major League Baseball and the players’ association announced Friday that 31 players and seven staff members tested positive for COVID-19 during intake for the resumption of training, a rate of 1.2%. Teams resumed workouts Friday for the first time since the coronavirus interrupted spring training on March 12, two weeks before the season was to start.

Players and staff were tested Friday, and general manager Mike Rizzo says the team still hasn’t received its results. Rizzo said it’s not safe to continue holding camp without accurate and timely testing and that the workout was canceled to prevent putting players and staff at risk.

Rizzo says: Major League Baseball “needs to work quickly to resolve issues with their process and their lab. Otherwise, summer camp and the 2020 season are at risk.”

Two players on the Indiana Fever were among the seven positive tests for the coronavirus across the WNBA, the team announced.

The league and teams didn’t reveal who the players were. All 137 WNBA players were tested over the past week as the teams prepared to head to Florida on Monday for the upcoming season, which will be played at IMG Academy.

The Fever will delay their travel by at least five days to self-quarantine in case any of them came into close contact with the infected players.

The WNBA hopes to start training camp later this week, with the regular season set to begin around July 24.