The Latest: ETSU to allow 10% capacity for basketball games 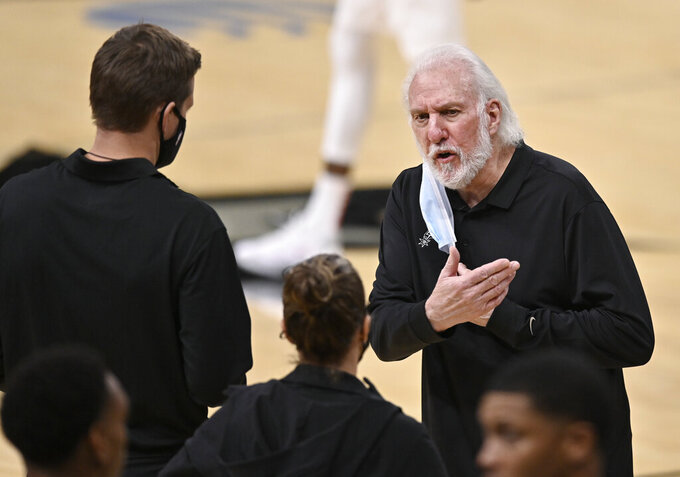 Face coverings will be required indoors at all times. Concessions will not be available in either venue for now.

The Atlantic Coast Conference announced that the men’s basketball game between No. 20 Duke and Pittsburgh scheduled for Tuesday has been postponed because of COVID-19 issues.

The postponement follows a positive test, subsequent quarantining, and contact tracing within the Panthers' program.

Pitt is adhering to the outlined protocols within the ACC Medical Advisory Group report.

The Tennessee Titans have placed kicker Stephen Gostkowski on the Reserve/COVID-19 list.

Gostkowski played in Sunday night’s 40-14 loss in Green Bay, pushing the opening kickoff out of bounds. He also made two extra points.

The reserve list is for players who either test positive for COVID-19 or are in quarantine after being in close contact with someone who has tested positive.

The four-time Pro Bowl kicker has made 18 of 26 field goals this season and is 46 of 48 on extra points. Gostkowski has made a career-high seven field goals of 50 yards or longer.

The Titans (10-5) can clinch the AFC South for the first time since 2008 with a win Sunday in Houston or a Colts loss.

Syracuse's women’s basketball game against North Carolina scheduled for Thursday has been postponed.

The decision was made out of an abundance of caution after confirmation of a positive COVID-19 test within the Syracuse program announced on Sunday.

A make-up date is to be determined.

Receiver John Brown was one of three Buffalo Bills players placed on the reserve-COVID-19 list hours before the team’s game at the New England Patriots.

Also placed on the list were practice squad members safety Josh Thomas and running back Christian Wade. Contact tracing protocols determined the three to have been in close contact with running back T.J. Yeldon, who was placed on the reserve-COVID-19 list on Sunday.

Though Brown won’t play against the Patriots, he was also activated from injured reserve after missing the previous four games with an ankle injury.

Vanderbilt women’s basketball has postponed the first three Southeastern Conference games of the league schedule as it deals with positive COVID-19 tests, contact tracing and quarantines.

Following the SEC guidelines, Vanderbilt’s home game with Florida on Thursday, the Commodores’ trip to Mississippi State on Sunday and Vanderbilt’s game at Missouri on Jan. 7 all have been postponed. Vanderbilt previously had postponed Monday night’s nonconference finale against Samford.

Florida now will play fifth-ranked South Carolina on Thursday instead of Feb. 25 as previously scheduled.

Louisville (5-0, 1-0 ACC) hasn’t played since beating Duke on Dec. 9. The Cardinals were scheduled to visit the Blue Devils on Thursday before Duke cancelled the remainder of its season amid the pandemic.

Stadium capacity for the Carolina Panthers' regular-season home finale Sunday against the New Orleans Saints has been adjusted to 1,500 fans due to increasing COVID-19 numbers. That’s down from the 5,240 fans that were allowed at the previous seven home games.

The Panthers said the decision was made in collaboration with local government and public health officials. Attendance will be limited to families and friends of the Panthers and Saints. In addition, some private suites will be open.

The San Antonio Spurs are pushing back their plans to bring fans in for home games, something they were planning on doing as early as Friday against the Los Angeles Lakers.

The Spurs announced Monday that their home games will remain without fans for now. “While we are confident in the plans and protocols we have in place, we are uncomfortable hosting fans at this moment as the COVID-19 numbers and data in our community continue to trend in the wrong direction,” Spurs Sports & Entertainment CEO RC Buford said.

The Spurs beat Toronto in their home opener Saturday and play the Lakers on Wednesday in the first of consecutive home games against the reigning NBA champions.

More coronavirus cases at Manchester City have led to the Premier League game against Everton being called off.

Pep Guardiola’s side had previously announced on Friday that striker Gabriel Jesus and defender Kyle Walker had tested positive for COVID-19 along with two staff members. City was able to play Newcastle on Saturday.

But hours before kickoff was due at Goodison Park on Monday, City announced that more coronavirus cases at the club had now forced the postponement of the game.

City says “after the latest round of COVID-19 testing, the club returned a number of positive cases, in addition to the four already reported on Christmas Day. With the security of the bubble compromised, there posed a risk that the virus could spread further amongst the squad, the staff and potentially beyond.”

It is the second Premier League match this season to be called off due to the coronavirus cases after Newcastle’s game against Aston Villa at the start of the month.

It comes amid concerns in England about the spread of a variant of COVID-19.