The Latest: FBS final rankings to be released on Dec. 20 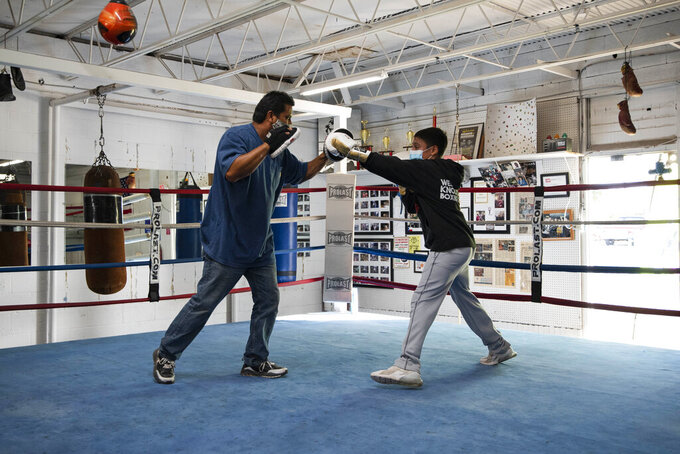 The College Football Playoff announced the selection committee’s final rankings, which determine the four teams that will play for the national championship, will be released Dec. 20. College Football’s version of selection Sunday was pushed back two weeks to accommodate the changing schedules of FBS conferences. All the conferences have either rescheduled their conference championship games for Dec. 19 or said that they might move them off their originally planned date of Dec. 5.

The College Football Playoff semifinals are still scheduled to be played Jan. 1 at the Rose Bowl in Pasadena, California, and the Sugar Bowl in New Orleans. The national championship game is set for Jan. 11 in Miami Gardens, Florida.

Indiana University anticipates having fans at football games this fall though it has not yet determined at what capacity. A final policy is expected in mid-August.

Athletic director Scott Dolson says the expectation is to play in front of smaller crowds. The announcement came just hours after the Big Ten released its revised 10-game schedule and one day before the Hoosiers open fall practice. Dolson says the athletic department will continue to follow the advice of the school’s Athletics Medical Advisory Group as well as guidelines from state and local leaders, the CDC and university officials.

One thing that already is clear: face coverings must be worn in and around Memorial Stadium.

Indiana also announced season-ticket holders can opt out of this season, donate ticket payments to the Varsity Club, apply the money toward 2021 tickets or receive a refund. Those options will also apply if games are postponed or canceled.

Ticket holders who opt out or cancel a purchase will be given the opportunity to buy the same seats next without losing their status for consecutive years.

The Detroit Lions have put center Russell Bodine on the reserve/opt-out list.

The Lions announced earlier Wednesday they had activated receiver Kenny Golladay off the reserve/COVID-19 list.

Bodine played 10 games last season for the Buffalo Bills. Prior to that, he spent four seasons with the Cincinnati Bengals.

New Indianapolis Colts quarterback Philip Rivers says he never considered opting out of this season because it probably would have ended his career.

The 38-year-old, eight-time Pro Bowler signed a one-year, $25 million contract in March with Indy after spending his first 16 seasons with the San Diego and Los Angeles Chargers.

“Obviously, you try to be smart. I think that’s really kind of where we are from a family standpoint,” said Rivers, who has nine children. “But deciding not to play, we never got there. I also think making that decision, for me, would have been making the decision to be done and I’m not there yet.”

In May, Rivers announced he would become the head coach at St. Michael Catholic High School in Fairhope, Alabama, when he retires. There, Rivers plans to coach his children — like his father did. He says the family has not decided yet whether the children would be home-schooled this fall.

“These guys are family to us – we respect their decisions, personally support them, want them and their families to stay safe and healthy,” coach Frank Reich said. “We’ll maintain contact with all of them, but also understand their decision.”

Panasiuk said on his Twitter account that he intends to come back and finish his senior year at Michigan State.

“Our country is facing difficult times with many unanswered questions regarding COVID-19,” Panasiuk said. “Unfortunately, with the uncertainty of the effects of COVID-19, I cannot risk my health and safety in order to play football this season.”

The American Athletic Conference says it will keep its eight-game conference football schedule in place and allow its 11 schools to play up to four nonconference games.

The AAC also announced it could move the date of its football championship game, scheduled for Dec. 5 at the home stadium of the top-seeded team, back to Dec. 12 or Dec. 19 if needed, due to COVID-19 disruptions.

The AAC has lost at least eight games against Power Five conference opponents that have altered schedules to play all or mostly within their league. More cancellations could come. The conference is allowing its members to find replacement games if possible. Conference play begins Sept. 19 as previously planned.

The South Carolina High School League has pushed back its start date for football practices and games.

The governing body decided to delay workouts until Sept. 8, three weeks later than the previously planned start of Aug. 17.

A seven-game schedule will start Sept. 25, according to the latest plan. The playoffs will conclude in December. Those teams that don’t make the playoffs will have the option of scheduling an extra game, as long as it happens before Nov. 20. High school stadiums will be limited to no more than 250 people in the stands with social distancing measures in place. Fans will also be required to wear a mask or face covering.

Miami Marlins outfielder Matt Joyce, who missed all of summer camp with the coronavirus, says his antibodies tests have come back negative and he continues to observe protocols for COVID-19.

“I’m like: ‘OK, I already had it. Do I really have to wear the mask all the time?’” Joyce said. “But I still want to be mindful and careful, because there’s still so much unknown.”

Joyce said he had mild symptoms for six days, and he was frustrated that it took him a month to test negative for the virus. Eighteen of his teammates are now infected following a recent outbreak that halted the Marlins’ season for a week.

“Hopefully they have a much better experience than I did with the testing results,” Joyce said.

Eastern Kentucky kicker Landon White has quit the football team in a social media post that accuses the FCS program of being lax in coronavirus testing and following protocols.

White says on Instagram that the team’s last test was July 6 and that symptomatic players were still in the building and around other teammates. The junior adds that meeting rooms have had “100+ players and staff crammed into it with zero space and no social distancing rules in sight.”

The 6-foot-1, 192-pound White also says first-year Colonels coach Walt Wells knows and “does nothing,” adding that he only cares about EKU earning a big payout from West Virginia for playing in Morgantown on Sept. 12.

Athletic director Matt Roan said in a statement the department is aware of White’s post. He says “egregiously or willfully ignoring safety guidelines” by staff or students will not be tolerated. Moan also says weekly testing will be done consistent with re-socialization requirements and anyone reporting symptoms will be tested, monitored and quarantined if necessary.

The Detroit Lions have activated wide receiver Kenny Golladay from the reserve/COVID-19 list.

The list was created for players who either test positive for COVID-19 or have been in close contact with an infected person. The Lions put Golladay on it last week.

Golladay was Detroit’s leading receiver last season with 65 catches for 1,190 yards and 11 touchdowns.

Albert Wilson became the second Miami Dolphins player — and their second receiver — to opt out of playing this year because of the coronavirus.

“It was a very tough choice,” Wilson wrote, “but since the day I started playing the game it’s always been Faith Family Football. Because of this crazy time I choose to put my family in the best situation I see fit.”

Coach Brian Flores said he supported both players in their decisions.

Wilson made four starts and had 43 receptions for 351 yards and one touchdown last season.

Cleveland Browns center and NFLPA president JC Tretter said he’ll push for daily testing for the COVID-19 virus during training camp while the NFL ramps up for the season.

Tretter said Wednesday on a Zoom call that he’s been satisfied with the protocols agreed to by the league and players’ union. Tretter said those guidelines will need to continue to evolve and change as more is learned about the virus.

Players are currently being tested each day, but that was supposed to change in two weeks to every other day if teams stayed below a certain percentage of positive cases. Tretter believes daily testing is necessary to avoid the “lag time” that has led to problems in Major League Baseball.

Tretter has chosen to play this season while knowing he’s putting himself and his pregnant wife at risk. He’s currently staying in a hotel and not at home to minimize any chance of getting sick.

Louisville has paused workouts for men’s and women’s soccer, field hockey and volleyball after 29 members of those programs tested positive for COVID-19.

The school said in a statement the positive tests and exposure were primarily traced to an off-campus party. Teammates and student-athletes from other sports were potentially exposed to the virus and remain quarantined due to contact tracing, the statement said.

“We’ve talked about other schools, we’ve used those examples to educate,” athletic director Vince Tyra said in virtual news conference. “And unfortunately, we fell into the same trap here this past weekend.”

Tyra also said the code of conduct within the teams, department and school are being stressed, and repeat violators could face disciplinary options up to dismissal.

Suspension of activities began Monday. Team members who have not tested positive or been identified through contract tracing may be permitted to return to on-campus workouts on Aug. 10.

They were among six players placed on the list in the early days of training camp.

Defensive tackle Tyeler Davison, fullback Keith Smith and safety Jamal Carter have yet to be cleared to rejoin the team.

Oluokun is expected to take over a full-time starting role this season, while Etling is in the mix to serve as the team’s third quarterback. Hawkins is a fourth-round pick out of California.

Cleveland Browns guard Colby Gossett has opted out of the 2020 season, becoming the fourth player on the team — and third offensive lineman — to decide not play because of the coronavirus pandemic.

Gossett qualifies for the high-risk opt-out agreed to by the NFLPA and will receive a $350,000 stipend for not playing. He was due to make $675,00 this season.

He is the second Browns guard to opt out, following Drew Forbes. The team also will be without offensive tackle Drake Dorbeck and defensive tackle Andrew Billings.

The deadline for players opting out is Thursday at 4 p.m.