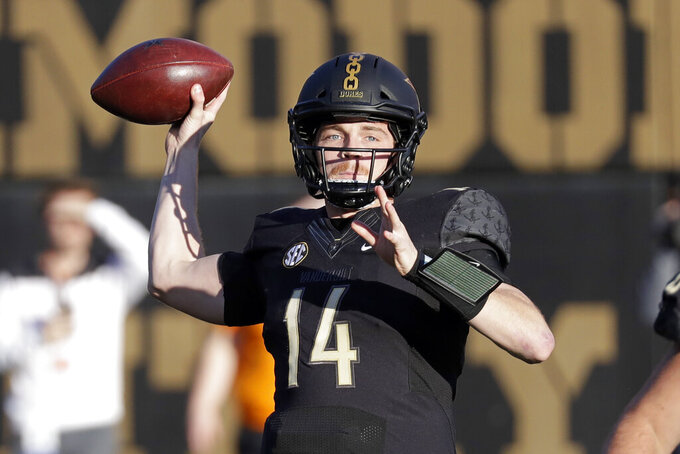 FILE - In this Nov. 24, 2018, file photo, Vanderbilt quarterback Kyle Shurmur (14) passes against Tennessee in the first half of an NCAA college football game, in Nashville, Tenn. There's one quarterback at the NFL scouting combine that New York Giants coach Pat Shurmur has absolutely fallen in love with. It's Kyle Shurmur, his 22-year-old son who threw 50 touchdowns over the last two seasons as Vanderbilt's starter. "Well, I'm extremely proud of him," the Giants coach said.(AP Photo/Mark Humphrey, File)

INDIANAPOLIS (AP) — The Latest on the NFL's annual scouting combine in Indianapolis (all times local):

North Carolina State offensive lineman Garrett Bradbury could be getting the attention of NFL scouts with some impressive numbers at the annual scouting combine.

After demonstrating his strength with 34 reps at 225 pounds on the bench press Thursday, No. 2 among lineman, the 6-foot-3, Bradbury showed off his speed and agility Friday.

His time of 7.41 seconds in the three-cone drill was the best in the group and his 40-yard dash time of 4.92 seconds was No. 3 among the linemen. Plus, Bradbury had the seventh-best vertical jump at 31 inches. Not bad for a guy who measured in at 6-foot-3, 306 pounds.

Who else fared well Friday?

Andre Dillard of Washington State had the top 20-yard shuttle (4.40), the longest broad jump (118 inches) and was second in the cone drill (7.44). Erik McCoy of Texas A&M had the top 40 among linemen (4.89) and Joshua Miles of Morgan State finished with the best vertical jump (36 inches).

Oklahoma State running back Justice Hill made quite a splash on the first full day of workouts at the NFL's annual scouting combine in Indianapolis.

He posted the fastest 40-yard dash in his position group (4.40 seconds), the top vertical jump (40 inches) and tied Travis Homer of Miami for the best broad jump (130 inches).

Nobody came close to the eye-popping combine record of 4.22 seconds in the 40, set by Bengals receiver John Ross two years ago.

Ryquell Anderson of Temple was the second-fastest back at 4.45. Mike Weber of Ohio State and Jordan Scarlett of Florida tied for third at 4.47 on a day only five of 28 players did not run. At least two were coming off late season injuries.

Josh Jacobs, of Alabama, chose not to run. He could be the first back drafted in April.

Ole Miss wide receiver D.K. Metcalf followed up his jaw-dropping viral photos of his chiseled chest and six-pack abs with another jaw-dropper at the NFL scouting combine.

Metcalf checked in at 6-foot-3 and 228 pounds with an incredibly low body fat index of just 1.9 percent. That's about 10 percent lower than most wide receivers.

Metcalf said he got his impressive physique by working out in preparation for the combine.

No, he said, the photo that first blew up on social media after Ole Miss teammate AJ Brown posted it wasn't doctored in any way.

Metcalf says he was surprised the photo got so much attention and he hears about it everywhere he goes, from fans wondering what his diet and workouts are like to coaches talking about his physique.

"Every team room I walk into," Metcalf said, "they're always like, 'Wow. You are really that big.'"

There's one quarterback at the NFL scouting combine that New York Giants coach Pat Shurmur has absolutely fallen in love with, and it's not Kyler Murray, Dwayne Haskins, Drew Lock, Daniel Jones or Ryan Finley.

It's Kyle Shurmur, his 22-year-old son who threw 50 touchdowns over the last two seasons for Vanderbilt.

Kyle Shurmur isn't quite in the same league as the top-flight QBs , but at 6-foot-4 and 225 pounds, a degree in economics and a background that includes a near equal split between under center and shotgun formations over four years in the SEC, he projects as a bona fide pro prospect.

Chances are good he'll be on somebody's depth chart come fall. Maybe even the Giants' roster.

"I'd be grateful for any opportunity I get," Kyle said.

Even if that means facing his father instead of playing for him.

"Any opportunity I get I'll be really appreciative," Kyle said.