The Latest: Gruden and Antonio Brown quite a match 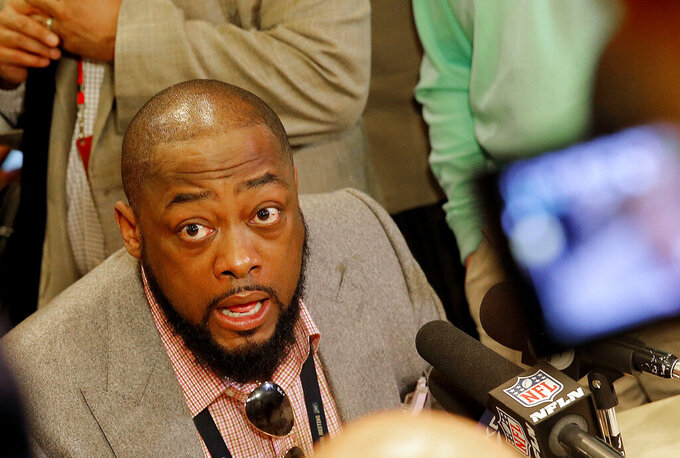 PHOENIX (AP) — The Latest on the NFL owners meetings Tuesday (all times EDT):

There's nothing on the football field Jon Gruden likes more than a big-time playmaker.

His Raiders' trade with Pittsburgh brought to Oakland one of the game's most dangerous scoring threats in wideout Antonio Brown.

"You have to know where he is," Gruden began. "He can help your running game. Put a safety over the top to double that guy, that helps you run the ball, I tell you. It helps the other guy on the other side. That's why getting Tyrell Williams was huge. Somebody that can take advantage of some one-on-one looks.

"It's also nice to have a receiver who couldn't care less what the coverage is. I remember Jerry Rice one year, he was so good. I used to see Jerry break the huddle and three (defensive) guys look for him: 'There he is. Don't let him catch the ball.' Then at the end, Jerry had eight catches for 140 yards. He did it every week.

"It is great to have a guy who can win. We have to do our part. It is a great responsibility for us to help Antonio Brown be one of the great Raiders of all time."

Gruden took a moment to catch his breath, then spoke about Brown's skills at freelancing when a play breaks down. He believes that will provide a huge help to quarterback Derek Carr.

"Some guys don't see it and react as quick as others. The great ones, they see it and they can do it at full speed. It's awesome. When you watch Antonio play, a lot of his production was on scramble plays.

The 35-year-old Taylor steps in as Bengals boss; the previous time Cincinnati hired a head coach was Marvin Lewis in 2003. Team owners are notoriously loyal, a good thing for most organizations. But the Bengals stagnated in recent seasons under Lewis, and their fans have been calling for a fresh start for a while.

They get that now with Taylor, another of the young offensive masterminds who are taking charge in various NFL cities.

"Things have been constant for a long time," he says of the Bengals, whose roller-coaster existence under Lewis included seven trips to the postseason — and seven losses with no wins, an unenviable NFL mark. "But the organization is open to change. There's already been much change; 75 percent of the coaching staff is new.

"Of course, it's very good to have those we retained who can give insight into how things have been done and why they had done it that way. That's a positive.

"What's unique about the Bengals is they are open to change and made that clear in the interview process. They made certain I was clean on how they want to do things, and it's awesome to have an open dialogue and clear communication. An organization has to be on the same page every step of the way and if it is, that's all you can ask for."

The NFL has awarded nearly a quarter-million dollars to two companies seeking to enhance protection provided by helmets.

Windpact, founded by former NFL cornerback Shawn Springs, is receiving $148,820 to tailor its padding technology, called Crash Cloud, for use in one Schutt's helmets.

Auxadyne was awarded $86,688 to advance its XPF material, an energy absorber that becomes more dense upon impact. The company will use this unique material, the only commercially available of its kind, to create a football helmet padding system that can reduce the impact to an athlete's head.

The awards were presented as part of the league's HeadHealthTECH Challenge series. The NFL has committed to a $60 million effort to improve the understanding of how head injuries occur in the sport, and to create incentives for helmet manufacturers, businesses, entrepreneurs, universities and others to develop and commercialize new and improved protective equipment.

Rarely do coaches look back. That's especially true when the recent past is kind of ugly.

So Pittsburgh's Mike Tomlin isn't spending a lot of time reflecting on losing star running back Le'Veon Bell to the Jets in free agency, or standout wide receiver Antonio Brown in a trade to Oakland that Brown basically forced.

But he admits to being disappointed they no longer are Steelers.

"But that's life and that's business," the veteran coach said. "I think we as an organization have moved on. I think they as professionals have moved on. And so we're excited about the formulation of our team for '19.

"Obviously, we appreciate the contributions that they gave us when they were a part of us. But the reality is that they're no longer that. And so we're focused on the guys that we work with."

Tomlin didn't flinch when asked if this was a case of addition by subtraction. Brown had become a distraction, to put it mildly, in the locker room, and his unhappiness affected the Steelers' performances. Bell sat out the entire 2018 season after being given the franchise tag for a second straight year.

Arians is returning to coaching after he retired from the Arizona Cardinals a year ago. He was hired in January by Tampa Bay, and this month he brought on Maral Javadifar and Lori Locust as full-time assistant coaches.

"It's time, and I'll be happy when it's not news anymore," Arians said. "That's where it should be heading. Two super-qualified people. I had (intern Jen Welter) with me in Arizona and it worked out fine.

"That they are gender-different, who gives a (darn)."

Locust is an assistant defensive line coach, and Javadifar is assistant strength and conditioning coach.

Arians, a two-time NFL Coach of the Year (2012 as an interim with Colts, 2014 with Cardinals) scoffed at the idea that any NFL player would look askance at being coached by a woman.

"Can women coach? Hell, yes. I've seen it," he said. "It is just a matter of getting opportunities. It's hard for young guys, too. It's a unique position in the NFL. If they can't do it, you get fired like everybody else.

"I've seen it first hand: Our linebackers went straight to Jen because she had a different way to teaching.

Every NFL player is going to look at you and say, 'How can you make me better.' If you have an answer, you are in. If you can't answer the question, you don't belong there anyway."

He projects it will take "probably five years" before women regularly coaching in the NFL no longer is a novelty, but insists it should happen much sooner — like already.

"I think back to the best teachers I had, most of them were female," he said. "Football, we are glorified school teachers. You can know all the football in the world, if you can't teach it . Why not take a great teacher of any gender and have them help your players. I don't see it as an issue."

Ignore the gossip and rumors.

That's the approach new coach Kliff Kingsbury is taking with his Arizona Cardinals up first in next month's draft.

Kingsbury, considered a passing offense guru in college, though he was fired after last season at Texas Tech, already has a first-round quarterback on his roster. The Cardinals took Josh Rosen of UCLA last year and he is the incumbent.

With rampant speculation that Arizona will select Heisman Trophy-winning QB Kyler Murray with the top overall pick, Kingsbury is covering his ears.

"With the first pick there is tons of chatter," he said. "As a coach and a player, you have to have thick skin. You have to understand what goes on and the circus that comes with this position."

Kingsbury scoffed at suggestions that Rosen doesn't fit his system.

"People have said a lot of things that are misconceptions, if you will," he noted. "Josh is a tremendous player. I watched him at UCLA. He played his best football in a spread system. Had some similarities to what we do. He's a tremendous thinker, very cerebral, can throw it with anybody. We take a lot of pride in building a system around the quarterback. To say he doesn't fit our system doesn't make sense."

As for the evaluations of the exciting Murray, who led Oklahoma to the College Football Playoff, Kingsbury said: "I've known him for a long time, so I don't think anything new was revealed to me. It was good for Steve (Keim, Arizona's general manager) and Michael (Bidwill, the team's president) to have a feel for who he is as a person, get to talk to his coaches.

Chiefs coach Andy Reid knew the questions about Tyreek Hill were coming. He simply had no information to provide regarding the All-Pro star wide receiver who was involved in a domestic battery episode in suburban Kansas City earlier this month.

"There's no further statement, nothing has happened," Reid said of the team's investigation of the incident. "We don't know what happened and that's what we're trying to figure out."

The Overland Park (Kansas) Police Department identified a juvenile as the victim. Hill's fiancee, Crystal Espinal, is identified among "others involved." The couple has a 3-year-old son, Zev.

Reid noted that the Chiefs organization has talked about Hill's situation and the options, but the team needs "to let (the investigation) run its course."

In the middle of last season, the team quickly released star running back Kareem Hunt after a video showed him physically abusing a female in a Cleveland hotel. Hunt since has been signed by Cleveland and suspended for eight games by the NFL.

"If you make a move like that," Reid said of cutting Hunt, "it's pretty well thought out. You try to gather all the information."

The 25-year-old Hill has a history of domestic violence. While at Oklahoma State in 2014, Hill allegedly punched and choked Espinal when she was pregnant with their son. He was kicked off the team and pleaded guilty to domestic assault and battery by strangulation, and received three years of probation in the case.

The conviction was dismissed in August and expunged from his record after he finished probation.

Minnesota Vikings owners Zygi, Mark and Lenny Wilf have donated $1 million to the Pro Football Hall of Fame through their foundation.

The donation from the Wilf Family Foundation will allow creation of a "Founders Exhibit" at the Hall of Fame in Canton, Ohio. The exhibit will focus on the role many founders and owners of NFL franchises have played in the growth of the league and the effect the sport has had on U.S. communities. The exhibit will cover their history from the start of the NFL nearly a century ago through today.

A special component will be "Women of the NFL."

The exhibit is slated to open in conjunction with the NFL's Centennial Celebration in 2020. The league is spotlighting its 100th season this year.

"The Pro Football Hall of Fame deeply appreciates the generosity of the Wilf Family. Zygi Wilf, Mark Wilf, and Lenny Wilf are great ambassadors for this game and the impact it has on millions of fans across the country and the world," Hall of Fame President and CEO David Baker said. "Thanks to the support from the Wilf Family Foundations, the Hall of Fame will be able to enhance our programming that inspires generations of fans by focusing on values such as commitment, integrity, courage, respect and excellence."

Vikings President Mark Wilf noted that football "has a unique ability to bring communities together and teach lessons applicable to everyday life. We want to honor those who helped make the game what it is today and further commemorate the NFL's first 100 years."