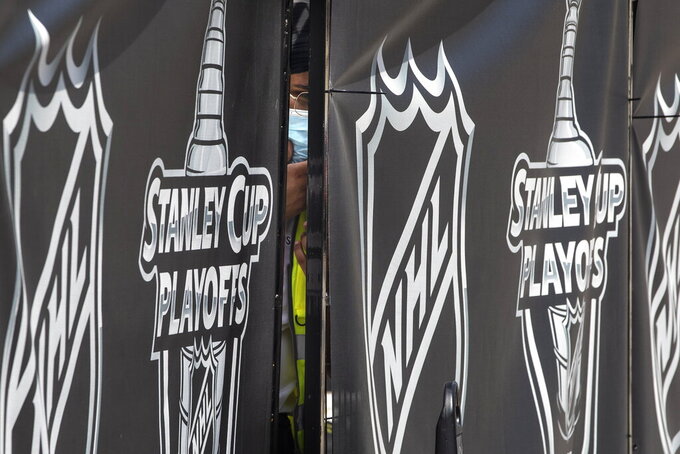 A security guard peers out from behind NHL-branded fencing at the entrance where players arrive at Toronto's Royal York hotel, which is acting as the "bubble" ahead of the return of the league's season following disruption due to the COVID-19 pandemic, Sunday, July 26, 2020. (Chris Young/The Canadian Press via AP)

Those figures include two staff members and an athlete whose positive tests were previously announced. Michigan State’s football team is currently awaiting the end of a 14-day quarantine.

The school’s announcement Monday did not specify how many of the 16 positive tests involved football players.The earliest possible return to workouts for football players is Aug. 4, and players will undergo surveillance testing before being cleared to return.

The list is for a player who tests positive for COVID-19 or has been quarantined after being in close contact with someone infected.

NFL teams are not allowed to disclose whether the player is in quarantine or is positive for COVID-19.

Tankersley was a third-round draft pick in 2017 who has started 11 NFL games, all as a rookie, and missed last season recovering from a knee injury.

North Carolina will have fewer fans in its home football stadium this fall if games are played.

The school released an open letter Monday from athletics director Bubba Cunningham and John Montgomery, the executive director of the Rams Club that operates as the department’s fund-raising arm.

The letter says officials "continue to plan for football to be played this season” but that reducing the number of fans inside Kenan Stadium will be a “necessity.” They didn’t specify an exact number for the reduction in fan attendance, saying there are still “multiple scenarios” being considered while social distancing protocols require there to be changes to availability and seat locations.

Additionally, the school won’t use a season-ticket format this year while moving to a still-developing system for individual game requests. The school will also go to a mobile or digital ticketing platform for contact-free entry to the stadium.

The Colorado Rockies say left-handed reliever Tim Collins has decided not to play this season because of concerns over the coronavirus pandemic.

Collins was part of Colorado’s 60-player pool and was assigned to the alternate training site in Albuquerque, New Mexico. He's the second member of the Rockies organization to opt out of the 2020 season.

Outfielder Ian Desmond said last month that he would skip the season to focus on his young family and to help revitalize youth baseball in his home state of Florida.

Collins has played six major league seasons. Last year he appeared in nine games with the Chicago Cubs between stints with the Twins and Reds organizations.

The U.S. Tennis Association has canceled two lower-tier tennis tournaments in Orlando, Florida, saying that the coronavirus pandemic makes it too dangerous to hold the events without a bubble setup.

The USTA says ATP Challenger 150 tourneys that were supposed to start on Aug. 22 and Aug. 29 at its national campus are being scrapped.

The USTA said the sort of “proper risk mitigation” that it plans for the U.S. Open -- the Grand Slam tournament scheduled to begin in New York on Aug. 31 -- “would logistically and financially be difficult to create” for smaller events.

The group also cited “the current rates of COVID-19 in Florida.

The Great Lakes Valley Conference is the sixth NCAA Division II league to suspend its football season because of the coronavirus pandemic.

The GLVC announced its regular season and championship would move to the spring. Also considering football in the spring are the Great Northwest, Northeast-10, Southern Intercollegiate, Central Intercollegiate, and Pennsylvania State Athletic Conference.

Six of the other 10 Division II conferences are delaying starts to their seasons. The Rocky Mountain Athletic, Great Midwest, Great Lakes Intercollegiate and Northern Sun still plan to play full seasons in the fall.

In Division III, the Midwest Conference became the 23rd league to postpone or cancel its season. The only Division III conferences planning to play all or part of their seasons this fall are the American Rivers, Michigan Intercollegiate, Minnesota Intercollegiate, Upper Midwest and USA South.

More than 1,700 NCAA games across three divisions are known to have been canceled or postponed, according to Associated Press research. The breakdown: 114 in the FBS, 317 in the FCS, 445 in Division II and 889 in Division III.

Saints quarterback Drew Brees and his wife, Brittany, say they’re donating $5 million toward a partnership with a Louisiana health care provider to build “numerous” health centers in economically struggling communities around the state.

Brees said in his announcement on social media that the first center will be built later this year in eastern New Orleans in partnership with Ochsner Health.

This marks the second multimillion donation Brees has made to benefit Louisiana since the coronavirus pandemic spread to the United States. In March, he donated $5 million to assist food banks in the state as people began losing jobs because of businesses closures or staff reductions stemming from government restrictions aimed at curbing the virus’ spread.

Louisiana, with a population of nearly 4.7 million, has been hard hit by the virus. As of Sunday, state health department figures showed a total of 107,574 confirmed cases of COVID-19 and 3,651 deaths.

The Metro Atlantic Athletic Conference has decided to cancel fall sports competition due to continuing health and safety concerns surrounding the COVID-19 pandemic.

MAAC Commissioner Rich Ensor says there are simply too many factors that prohibit the conference from safely delivering a competitive atmosphere. A decision on whether fall sports competition would be feasible in the spring will be determined by the conference presidents at a later date.

MAAC student-athletes whose seasons have been canceled will still be permitted to train when they return to campus, and institutions will be responsible for implementing their own training guidelines in accordance with state and local COVID-19 regulations and guidance provided by the NCAA.

The Collegiate Commissioners Association is working with the NCAA on a series of waivers related to fall sports eligibility and competition.

IndyCar is set for another schedule revamp, with races scheduled for Portland International Raceway and a doubleheader weekend at Laguna Seca in California both canceled.

The series will now run doubleheaders at Mid-Ohio, in the St. Louis area, and at Indianapolis Motor Speedway. The series will run Aug. 8-9 at Mid-Ohio; Aug. 29-30 at World Wide Technology Raceway; and Oct. 2-3 at the IMS road course.

IndyCar is still scheduled to run 14 races this season.

The NCAA has reduced the minimum number of contests required of Division I fall sports teams, excluding football, by 50% this season.

Some conferences, like the Big Ten and Pac-12, have already announced they will play nothing but conference schedules in their fall sports.

The oversight committee also agreed to suspend the criterion requiring teams to have at least a .500 record to be considered for at-large selections into a championship field. A previous decision by the Division I Council allows conferences to determine how their automatic qualifiers are chosen for NCAA championship events up to two weeks prior to selections.

The league says it administered a total of 4,256 tests to more than 800 players from July 18-25. Two players tested positive during the first week of training camps July 13-17.

Players and staff from the 24 teams participating in the expanded Stanley Cup playoffs traveled to the hub cities of Toronto and Edmonton, Alberta, on Sunday. They’re now in a quarantined bubble and will be tested daily after every other day testing during camp.

The NASCAR weekend in late August at Dover International Speedway will take place without fans.

Delaware state officials denied the track’s request to host a limited number of fans Aug. 21-23 in the interest of public health and safety. The track is to host a NASCAR Xfinity Series and NASCAR Cup Series on Saturday and Sunday of that weekend.

NASCAR has run race weekends without fans with limited exceptions, notably at tracks in Tennessee and Texas.