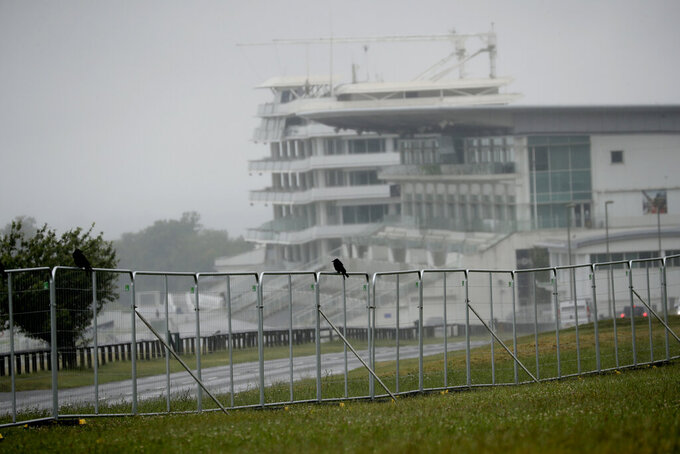 A crow sits on fencing erected around the Epsom Downs racecourse, in Epsom, England, Tuesday, June 30, 2020. The Derby annual horse race will take place behind closed doors on Saturday amid the coronavirus pandemic. (AP Photo/Matt Dunham)

The Oklahoma athletics department has announced $13.7 million in budget cuts it blames on fallout from the coronavirus pandemic, including a 10% salary drop for any employee earning at least $1,000,000 per year.

Athletic director Joe Castiglione said the moves were the “first steps” in responding to the financial losses associated with virus outbreak. He warned other steps may be necessary.

The football team began voluntary workouts Wednesday. The Sooners said 111 players were tested Monday and there were seven additional positive tests after seven previously. In all, 14 Oklahoma players have tested positive along with two staff members. It said two players have since recovered.

Houston's Thabo Sefolosha is opting out of the NBA’s restart in Orlando, a person familiar with the decision has told The Associated Press.

The person spoke to the AP on the condition of anonymity Wednesday because the decision hasn’t been announced.

Sefolosha is in his first season with the Rockets. He averaged 2.2 points and 2.3 rebounds in 41 games.

The 36-year-old is a 15-year NBA veteran who has also played for Utah, Atlanta, Oklahoma City and Chicago.

The Rockets are schedule to resume the season on July 31 against the Dallas Mavericks.

Sacramento Kings coach Luke Walton says forward Jabari Parker has been cleared to end his self-isolation following a positive test for the coronavirus. Walton also spoke to Parker about handling himself in public after photos surfaced last week of the forward playing tennis without a mask following his positive test.

Center Alex Len and guard Buddy Hield also announced they contracted the coronavirus, and Walton says all three are “doing much better” while being tested every other day. No players have told Walton they don’t want to take part as the Kings (28-36) prepare to play their final eight games in Orlando beginning at the end of this month.

“This is a grown men’s league,” Walton said on a call Wednesday. “We talk to our guys but you can’t make them do anything. All we can do is encourage them to follow the guidelines that we’ve all been given: Do your best to social distance, wear a face mask when you’re out, wash your hands as often as possible, stay away from shaking hands, those type of things.”

One of Walton’s top priorities now is “making sure everyone’s comfortable” — which will mean players bringing their own workout gear and leaving an extra pair of shoes that stay at the practice facility or arena.

The Lexington County Blowfish of the summertime Coastal Plain League will open their home season as scheduled Wednesday, but without fans after South Carolina Gov. Henry McMaster said people in the stands would be a violation of his executive order against spectator sports due to COVID-19.

The team, a collection of college players, had sold seats for its opening game against the Bomb Island Bombers. After the governor spoke Wednesday, the team posted on Twitter that fans would not be allowed into games until it received a clarification from the governor’s office. The state of South Carolina has seen a spike of cases the past few weeks and on Tuesday had a one-day high of 1,741 new cases.

McMaster also warned that residents should wear masks and maintain social distance “so we can enjoy high school and college football in South Carolina this fall.”

The Green Bay Packers will have a six-decade NFL training camp tradition end as they won’t be staying at nearby St. Norbert College because of coronavirus concerns.

The Packers instead will have their entire training camp operations at Lambeau Field. Housing arrangements are still being finalized.

Packers officials said they made the switch due to NFL protocols asking clubs to maximize use of their own facilities to mitigate exposure to the virus.

St. Norbert had hosted the Packers for training camp since 1958

The Packers have traditionally eaten dinner at St. Norbert and stayed in a residence hall on campus while commuting to their training-camp workouts at Lambeau Field.

The start of the outdoor motocross season is being delayed for a second time due to a spike in coronavirus cases.

Supercross was able to complete its season by holding the final 10 races at University of Utah’s Rice-Eccles Stadium over a span of three weeks last month. Eli Tomac won his first Supercross title.

With COVID-19 cases on the rise in recent weeks, series operator MX Sports Pro Racing opted to postpone the start of the outdoor season until August.

The series was scheduled to start July 18 in Indiana after being pushed back in May due to the pandemic. The season-opening Hangtown Classic was canceled in March.

Chicago Cubs pitching coach Tommy Hottovy is recovering from a severe case of COVID-19 that had him quarantined for 30 days.

The 38-year-old Hottovy broke down Wednesday as he detailed a harrowing ordeal during a conference call. The Cubs resume workouts Friday for the first time since Major League Baseball shut down camps on March 12.

Hottovy is in his second season as the Cubs’ pitching coach. The former major leaguer said he experienced fevers, breathing trouble and an increased heart rate. The symptoms worsened at night, making it difficult to sleep.

Because he didn’t want his wife and young children to catch the virus, Hottovy isolated himself in a spare bedroom at home. He struggled during one Zoom meeting with pitchers, and manager David Ross took over for him.

Things got so bad that Hottovy spent eight hours at Northwestern Memorial Hospital in Chicago on the 12th day he was sick. He finally tested negative about two weeks ago.

Hottovy said he’s still weakened from the illness. He considered opting out of the season while he was sick but decided against that.

Six FC Dallas players have tested positive for COVID-19 since arriving in Florida for the resumption of MLS play, after every member of the team’s traveling party was negative in league-mandated testing before departing Dallas last Saturday.

After consultation with MLS medical officials, FC Dallas took proactive steps to isolate the newly affected players as well as all FC Dallas players and staff that are in Florida. All members of the club’s delegation will remain quarantined in their hotel rooms pending the results of further COVID-19 testing.

The league says no other team has been in contact with the FC Dallas delegation since its arrival.

All of the league’s 26 teams are sequestered in hotels in advance of the tournament played without fans at the ESPN Wide World of Sports complex at Disney World. The tournament opens next week.

The Kansas City Royals have launched what they are calling a “Fanbassador” program in which up to 500 fans may purchase a plastic cutout of their likeness for $40 apiece that will be displayed in a seat at Kauffman Stadium during the abbreviated 2020 season.

A portion of the proceeds will benefit the Royals Respond Fund, an effort to support Kansas City-area nonprofits that are focused on food insecurity amid the coronavirus pandemic.

The idea of putting fan likenesses inside stadiums began in Germany when soccer resumed, and other baseball franchises like the Oakland A’s have proposed the same idea. Season ticket holders will have the first opportunity to purchase their likenesses.

UConn women’s basketball coach Geno Auriemma is asking for help from Congress to get foreign students, including athletes, back to campus.

The Huskies have three foreign players on their roster this year: Anna Makurat, a sophomore from Poland; Nika Muhl, a freshman from Croatia, and Aaliyah Edwards, a freshman from Ontario, Canada.

The Hall of Fame coach says all three are experiencing issues getting into the United States because of the coronavirus pandemic and he doesn’t know if any of them will be back with the rest of the team on July 26. Auriemma questions why professional athletes have been allowed back from overseas, but not college athletes.

“We started asking questions like, ‘Why is that?’” Auriemma said. “We’ve got some really good people in Washington, D.C., looking into how to do that for international students, not just athletes but kids that have enrolled here, gone to school. What is the issue here? Why can’t we get that resolved?”

Auriemma said he’s planning as if there will be a college basketball season but is not sure that will happen. “How are certain teams going to come here and play if they come from a state that’s been severely impacted? I don’t know,” he said.

The Russian soccer league says another game involving FC Orenburg has been called off following an outbreak of coronavirus at the club.

The league says the regional public health body did not sign off on Orenburg hosting Ural Yekaterinburg. Orenburg already forfeited a game on Saturday against FC Krasnodar.

The league says 10 people at Orenburg have been confirmed to have the virus. The club said last week that six players and two staff members had tested positive.

There was no mention of any plan to reschedule the game.