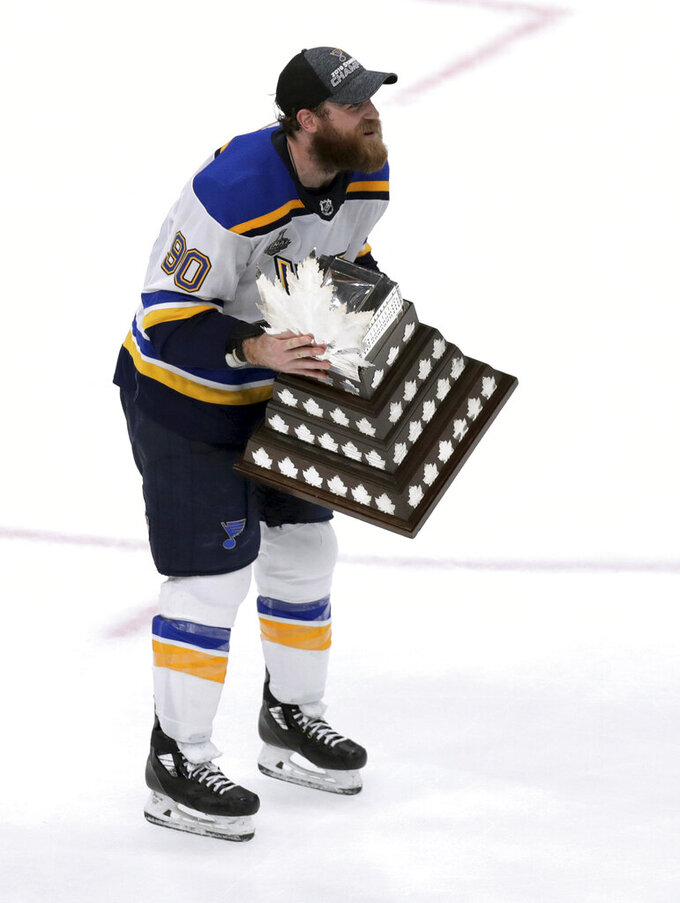 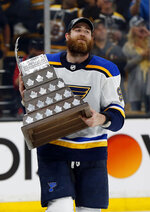 BOSTON (AP) — The Latest from Game 7 of the Stanley Cup Final between Boston and St. Louis (all times local):

Ryan O'Reilly of the St. Louis Blues has been named the Conn Smythe Trophy winner as the most valuable player of the playoffs.

The gritty forward lifted the trophy on the ice moments after the Blues beat Boston 4-1 in Game 7 of the Stanley Cup Final. He scored the opening goal late in the first period.

The St. Louis Blues have won the first Stanley Cup in franchise history.

Ryan O'Reilly and Alex Pietrangelo scored late in the first period and Brayden Schenn and Zach Sanford added goals in the third period as the Blues shut down the Boston Bruins 4-1 on Wednesday night in the deciding Game 7 of the Stanley Cup Final.

O'Reilly tipped Jay Bouwmeester's point shot in with 3:13 left in the first on just the third Blues shot of the game. Jaden Schwartz fed Pietrangelo for a stunning goal with 7.9 seconds left.

Schenn scored with 8:35 left and Sanford at 4:38 to put the Blues up 4-0, setting off cheers at two different watch parties back in St. Louis — including the Blues' home arena, the Enterprise Center. Boston added a late goal with 2:10 left.

The St. Louis Blues are 20 minutes away from their first Stanley Cup championship.

The Blues lead the Boston Bruins 2-0 after two periods. No goals were scored in the second period. Blues goaltender Jordan Binnington strengthened his case for the Conn Smythe Trophy as playoff MVP by stopping all 11 Boston shots to give him 23 saves so far.

The Bruins have limited the Blues to 10 shots on goal, but Ryan O'Reilly's deflection and Alex Pietrangelo's backhander gave them two goals against Tuukka Rask. The Bruins netminder entered the night 3-2 with a 3.18 goals-against average and .877 save percentage in Game 7 in his NHL career.

Boston is hosting its first Game 7 Cup Final game as it seeks its seventh NHL championship.

The St. Louis Blues hold a surprising 2-0 lead on Boston after a wild first period in Game 7 of the Stanley Cup Final.

The Bruins have been the far more aggressive team and had the Blues badly out of synch for most of the opening 20 minutes. But it was the Blues who struck first.

Ryan O'Reilly scored on a perfect deflection and captain Alex Pietrangelo lifted a backhander past Tuukka Rask in the final seconds of the opening period to give the St. Louis Blues a two-goal lead.

O'Reilly tipped Jay Bouwmeester's point shot in with 3:13 left in the period on just the third Blues shot of the game. After a bad line change by the Bruins, the Blues got numbers in the offensive zone and Jaden Schwartz fed Pietrangelo for a stunning goal with 7.9 seconds left.

The Boston Bruins are off to a strong start in Game 7 of the Stanley Cup Final on home ice against St. Louis.

So far, Blues goalie Jordan Binnington has been up to the challenge.

There was no score through the first 13 minutes of the game, but St. Louis looks scattered and has been outshot 7-1. Binnington made several outstanding saves, including one with his right armpit on Brad Marchand during a power play.

Boston is hosting its first Game 7 Cup Final game as it seeks its seventh NHL championship. St. Louis is going for its first title.

Game 7 of the Stanley Cup Final between the St. Louis Blues and Boston Bruins is underway after some deafening pregame festivities.

The crowd roared for three-time Olympic gold medalist Aly Raisman and Super Bowl MVP Julian Edelman in David Ortiz jerseys when they were brought out to wave a Bruins banner. They were joined by Liam Fitzgerald, a young Bruins fan who survived cancer.

The roar was even bigger for Bruins captain Zdeno Chara when he was introduced. Chara is playing with what many believe is a broken jaw.

As if emotions aren't high enough for the first decisive seventh game for the Stanley Cup in Boston history, the nods to Ortiz added to the atmosphere. The retired Red Sox star is recovering in a Boston hospital after what police say was an assassination attempt in his native Dominican Republic.

Boston is hosting its first Game 7 Cup Final game as it seeks its seventh NHL championship. St. Louis is going for its first title.

Recuperating Red Sox star David Ortiz wasn't far from the hearts of Bruins fans before Game 7 of the Stanley Cup Final in Boston.

Three-time Olympic gold medalist Aly Raisman and Super Bowl MVP Julian Edelman of the New England Patriots wore Ortiz jerseys when they were brought out to wave a Bruins banner before the decisive game against the St. Louis Blues. They were joined by Liam Fitzgerald, a young Bruins fan who survived cancer.

The banner captain has become a tradition for the Bruins, with the honors going to a local celebrity or sports star. All-time Bruins great Bobby Orr has already done it twice this postseason.

Ortiz is recovering in a Boston hospital after what police say was an assassination attempt in his native Dominican Republic.

There are no surprises in the lineups. Boston defenseman Matt Grzelcyk is back two weeks after suffering a concussion on a hit by St. Louis forward Oskar Sundqvist, who was suspended one game. Grzelcyk, who goes in for Connor Clifton, missed the past four games.

St. Louis will be without injured forward Rob Thomas for the fifth time in six games during the series. With Ivan Barbashev back from a Game 6 suspension and Thomas out, Sammy Blais stays in on the Blues' third line.

Boston is seeking its seventh NHL championship. St. Louis is looking for its first.

Matt Grzelcyk replacing Connor Clifton in the Boston Bruins' lineup for Game 7 of the Stanley Cup Final is a no-brainer because he was cleared from concussion protocol. The St. Louis Blues had a harder decision to make.

After his team fell flat in Game 6, coach Craig Berube decided to put defenseman Joel Edmundson back in the lineup in place of Robert Bortuzzo. He said he was OK with four left-handed shooters on defense because righties Colton Parayko and Alex Pietrangelo are playing so much.

Berube told Edmundson on Tuesday he'd be back in after being a healthy scratch the past two games.

"I played in I think three Game 7s now so this is going to be my fourth," Edmundson said. "None of them compare to this one. Obviously it's going to be the biggest game of my life. But everyone's excited."

The return of Ivan Barbashev from suspension pushes banged-up forward Robert Thomas out of the lineup. Struggling Sammy Blais stays in for St. Louis on the third line with Tyler Bozak and Patrick Maroon.

Preparations were underway on the streets outside Boston's TD Garden in the hours before Game 7 of the Stanley Cup Final.

By early afternoon, police were setting up sidewalk barriers in preparation for the first championship-series Game 7 in Boston since the Celtics beat the Lakers to win the NBA title on June 12, 1984, 35 years to the day of Blues-Bruins.

Thousands of fans are expected to be in the vicinity of the arena, which will have a charged atmosphere. Buzz began circulating during the day that Patriots quarterback Tom Brady would be the pregame flag-bearer to fire up the crowd and former Red Sox slugger David Ortiz would make an appearance on the video screens from his room in intensive care at Massachusetts General Hospital after being shot at a bar in his native Dominican Republic three days ago.

Matt Grzelcyk (GRIHZ'-lihk) is expected to return to the Boston lineup for Game 7 of the Stanley Cup Final against St. Louis.

Grzelcyk's return is a major boost on the blue line for Boston. He suffered a concussion two weeks ago in Game 2 of the series and has missed the past four.

Coach Bruce Cassidy says the puck-moving defenseman was cleared through the concussion protocol Wednesday, hours before the game. Connor Clifton is set to come out to make room.