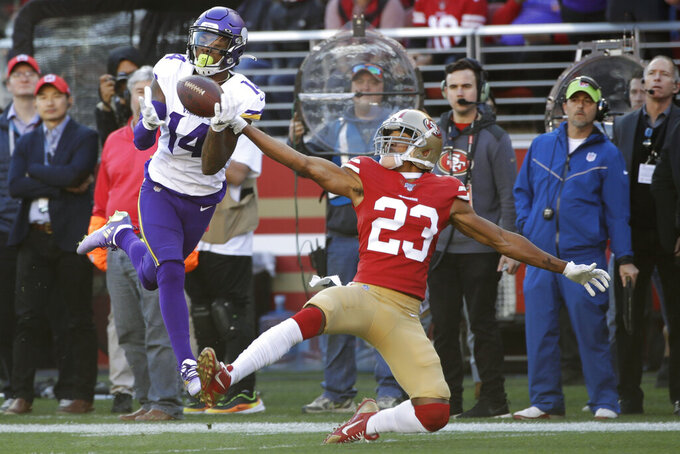 FILE - In this Jan. 11, 2020, file photo, Minnesota Vikings wide receiver Stefon Diggs (14) catches a touchdown pass in front of San Francisco 49ers cornerback Ahkello Witherspoon (23) during the first half of an NFL divisional playoff football game in Santa Clara, Calif. A person with direct knowledge of the move confirms to The Associated Press that the Buffalo Bills have acquired Diggs in a trade with Vikings. (AP Photo/Marcio Jose Sanchez, File)

The Carolina Panthers have signed free agent wide receiver Pharoh Cooper to a one-year contract and safety Juston Burris to a two-year deal.

Cooper was an All-Pro returner for the Los Angeles Rams in 2017 with 932 yards and a touchdown on 34 kickoff returns to lead the NFL with an average of 27.4 yards per return. He also racked up 399 yards on 32 punt returns.

The 25-year-old Cooper is still developing as a wideout, though. He had a career-high 25 receptions for 243 yards and a touchdown in 12 games last season with Arizona. He also returned 25 kickoffs for 561 yards (22.4 yards per return) and 17 punts for 129 yards.

Burris has played in 52 career games with 11 starts, totaling 58 tackles, 14 passes defensed, four interceptions, two forced fumbles, one fumble recovery and one sack in four NFL seasons with the New York Jets and Cleveland Browns. Last season he had a career-high 30 tackles for Cleveland and two interceptions.

The 6-foot, 240-pound Burton is a five-year veteran who played with Washington last season after spending two seasons each with Detroit and Chicago.

The New Jersey native and former Rutgers player has eight career NFL carries for 11 yards and nine catches for 53 yards and a touchdown. He also plays special teams.

The Saints are familiar with Burton, who spent the 2019 preseason with New Orleans before being released and later was picked up by the Redskins.

The Detroit Lions have agreed to terms with cornerback Tony McRae.

McRae is entering his fourth NFL season after spending the past two with Cincinnati and splitting 2017 between Cincinnati and Baltimore. He originally signed with Oakland as an undrafted rookie.

McRae has played in 37 games, including three starts.

The Lions announced that they’ve agreed to terms with safety Miles Killebrew, who has been with Detroit for four seasons since being drafted in 2016.

The Baltimore Ravens and the foundation run by owner Steve Bisciotti and his wife have teamed to donate $1 million to support four non-profit organizations in their efforts to combat the COVID-19 public health crisis.

The team and the Stephen and Renee Bisciotti Foundation will contribute $250,000 each to the Fund for Educational Excellence, the United Way of Central Maryland, the Baltimore Community Foundation and the Maryland Food Bank.

“We want to help those in our community who are most affected by the COVID-19 crisis,” Ravens president Dick Cass said. “We chose to donate through these four organizations because we are confident they will apply our funds quickly and directly to people in need."

Free agent tackle Joe Haeg has agreed to terms on a one-year contract with the Tampa Bay Buccaneers.

The fifth-year pro spent the first four seasons of his career with the Indianapolis Colts. He entered the NFL as a fifth-round draft pick in 2016 and started 35 of 55 games he played for the Colts.

The Indianapolis Colts have re-signed backup offensive lineman Le'Raven Clark. Terms of the deal were not immediately available.

Clark has made 12 starts in 35 games, all with the Colts since being selected in the third round of the 2016 draft.

He did not play last season despite being on the active roster for all 16 games, in part because Indy's five regular linemen started every game.

Clark did start six times in 2018 when the Colts allowed a league-low 18 sacks.

The Chiefs agreed to a one-year contract with former New York Giants cornerback Antonio Hamilton, the first significant deal that the Super Bowl champions have made since the start of free agency earlier in the week.

Kansas City entered the market desperate for help in the defensive backfield after losing Kendall Fuller, Morris Claiborne and Bashaud Breeland to free agency. Fuller and Breeland in particular were crucial to a defensive turnaround under new coordinator Steve Spagnuolo that helped deliver the Chiefs their first Super Bowl title since 1970.

The Jacksonville Jaguars have agreed to terms on a one-year contract with defensive end and special teams ace Lerentee McCray.

McCray spent the past three years in Jacksonville, totaling 26 tackles and 2½ sacks while serving as a core special teams player. He missed seven games in 2019, including the final six because of a hamstring injury. He has appeared in 72 games during seven NFL seasons with Denver, Buffalo and Jacksonville.

The 29-year-old McCray is currently the second-oldest player on Jacksonville’s retooled roster, a few months younger than cornerback D.J. Hayden.

“We look forward to bringing him back as a veteran presence in our locker room in 2020,” coach Doug Marrone said.

The Minnesota Vikings have another starter on defense to replace. Defensive end Everson Griffen will not re-sign with the team.

Griffen and his agent announced Friday they were unable to come to terms with the Vikings because of the team's salary-cap constraints. Griffen is the longest-tenured player on the team, having played 10 seasons in purple. He had eight sacks in 2019.

Hardee has played in 46 regular-season games and five playoff contests during his first three NFL seasons, all with the Saints.

Undrafted out of Illinois, where he played receiver, Hardee has made 24 career special teams tackles to go with a blocked a punt and 10-yard reception from Taysom Hill on a successful fake punt.

The Cleveland native’s defensive highlights include a 77-yard interception return in 2018.

The New York Jets are re-signing linebacker Neville Hewitt to a one-year deal worth $2 million, according to agent Drew Rosenhaus.

Hewitt was a valuable backup-turned-starter last year for the Jets at inside linebacker after season-ending injuries to Avery Williamson and C.J. Mosley. He finished third on the team with 78 overall tackles, three sacks, two interceptions and seven quarterback hits.

Hewitt, who turns 27 next month, could again provide depth as the Jets monitor the health statuses of Williamson and Mosley. Williamson is coming off a knee injury suffered in the preseason last summer, while Mosley missed all but two games in his first year with the Jets after injuring his groin and core muscle area in the season opener.

Hewitt signed with Miami in 2015 as an undrafted free agent out of Marshall, and joined New York as a free agent in 2018. He has 5 1/2 sacks and three interceptions in five NFL seasons.

The Atlanta Falcons have re-signed safety Sharrod Neasman to a one-year contract.

Neasman, who was an unrestricted free agent, played in 15 games last season and had four tackles on special teams.

Neasman signed with Atlanta as an undrafted free agent from Florida Atlantic in 2016. He spent time with the Saints before he returned to Atlanta in 2018. He has 45 tackles in 41 games.

The funding, being distributed through his family foundation, is targeted for support in Georgia and Montana.

The fund is focused on the immediate needs of economically vulnerable populations and will be distributed to nonprofit organizations that address food insecurity, housing stability, medical supports and childcare, among other needs.

A $100,000 grant to Hands On Atlanta will ensure 31 AmeriCorps members can continue to support public schools across metro Atlanta. A $100,000 grant to the Atlanta Police Foundation will help maintain adequate staffing and safety for officers.

Also, Mercedes-Benz Stadium has donated 3.5 tons of food with a $100,000 value, providing more than 2,310 meals to six nonprofit groups in Atlanta.

The Buffalo Bills have agreed to re-sign backup safety Dean Marlowe to a one-year contract.

He's a fifth-year player who spent the previous two seasons on Buffalo's active roster after being signed to the team's practice squad in 2017. Marlowe had two starts and appeared in nine games last season.

He initially broke into the NFL with Carolina in 2015, when current Bills coach Sean McDermott served as the Panthers defensive coordinator.

The Dallas Cowboys are bringing back several of their depth players, reaching agreements with linebackers Joe Thomas and Justin March while re-signing offensive lineman Joe Looney.

Thomas was a stabilizing part of the linebacking group after emerging star Leighton Vander Esch was limited to nine games because of a neck injury that required surgery. March played some linebacker but has been an important on special teams as well.

The 28-year-old Thomas has started 10 of 67 games in six seasons, with 157 tackles and one interception. The 26-year-old March made all five of his career starts with Kansas City in 2016. Both were undrafted free agents.

Looney returned to a backup role in 2019 after starting all of the previous season at center while 2016 All-Pro Travis Frederick recovered from an autoimmune disorder. Looney started the 2019 season finale at left guard after injuries to Connor Williams and backup Xavier Su’a-Filo.

Linebacker Elandon Roberts has signed with the Miami Dolphins, who added yet another ex-New England Patriots player to the roster.

Roberts played with the Patriots from 2016 to 2019. Last year he was a captain, starred on special teams and occasionally played fullback, catching a 38-yard touchdown pass from Tom Brady against Miami.

Miami also signed safety Clayton Fejedelem, who landed an $8.55 million, three-year deal that includes $3 million guaranteed. Fejedelem was a seventh-round draft pick by the Bengals in 2016 and became a special teams standout in four seasons with them.

The Cleveland Browns have added another veteran safety to their secondary, agreeing to terms with Andrew Sendejo on a one-year, $2.25 million contract.

The 32-year-old Sendejo played for Minnesota and Philadelphia last season. The 6-foot-1, 210-pound Sendejo is the second safety locked up by the Browns in free agency this week. On Wednesday, the team worked out a deal with former Raiders safety Karl Joseph.

Sendejo started with Dallas in 2010 before playing nine seasons with Minnesota. New Browns coach Kevin Stefanski was with Vikings that entire time.

Sendejo had three interceptions last season and nine in his career.

The New York Jets are re-signing cornerback Arthur Maulet to a one-year deal after not tendering him as a restricted free agent.

Maulet was solid while starting six games late last season after injuries decimated the cornerback spot. He finished with 41 overall tackles, an interception and two passes defensed. Maulet also recovered a fumble for a touchdown on special teams.

The Buffalo Bills are indeed, as quarterback Josh Allen put it on Twitter, digging it.

The Bills announced acquiring receiver Stefon Diggs in a multi-draft-pick trade with the Minnesota Vikings.

The trade was agreed to Monday, and announced by both teams Friday.

The Vikings acquired four draft picks, including Buffalo's first-round choice (22nd overall), giving them five of the top 105 picks in this year's draft. Minnesota also acquired Buffalo's fourth- and fifth-round picks this year, and a fourth-round selection in 2021.

Buffalo also acquired the Vikings' seventh-round pick as part of the deal to provide the Josh Allen-led offense a primary deep threat it has been previously missing. Diggs joins an established group of receivers rounded out by John Brown and Cole Beasley.

The 26-year-old Diggs has topped 1,000 yards receiving each of his past two years. Last year, he had a career-best 1,130 yards receiving and ranked fourth in the NFL in averaging 17.9 yards per catch.

Allen welcomed the trade with a tweet that read: "Ya Digg?"

Diggs responded by writing: “LETS GET IT.”