The Latest: Tennessee scraps scrimmage with 44 Vols out 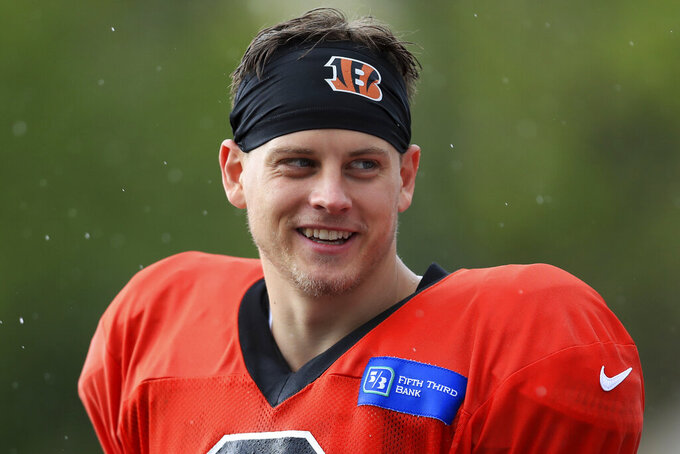 FILE - Cincinnati Bengals' Joe Burrow walks off the practice field after an NFL football camp practice in Cincinnati, Tuesday, Aug. 18, 2020. It's all about the quarterbacks in the AFC North. (AP Photo/Aaron Doster, File)

Tennessee football coach Jeremy Pruitt says he had to turn a scheduled scrimmage into a regular practice Saturday because 44 players could not practice.

Pruitt says those players hadn’t been at the last three or four practices, and the Vols were left with only 30 offensive players. That forced coaches to focus on two groups in situational work.

Of the 44 Volunteers who did not practice, Pruitt says seven or eight of those are active COVID-19 cases. Three players are dealing with injuries or surgeries. Pruitt says approximately 27 or 28 are in quarantine.

Pruitt says Tennessee has had 48 players who have missed at least 14 days due to quarantine, with four quarantined twice. Some self-reported, and Pruitt says one eventually tested positive for COVID. He says they are working through contract tracing.

Teams are allowed 25 practices, and Pruitt says Tennessee probably will end up with 20 or 22 practices barring a change over the next couple weeks. He says they’re learning as they go and it’s been tough to prepare a team to play.

The Cleveland Browns and Cincinnati Bengals will be allowed to have 6,000 fans at two home games this season.

Ohio Gov. Mike DeWine announced Saturday that the teams have been granted a variance for a “two-game trial” on a state requirement limiting 1,500 people at outdoor gatherings.

The variance allows for no more than 1,500 fans in each side of the stadium. Fans will be required to wear masks throughout the games.

Cleveland will be permitted to have fans for its opener on Thursday, Sept. 17 against Cincinnati and rookie quarterback Joe Burrow, the No. 1 overall pick in this year’s draft. The Browns can also have fans on Sept. 27 against Washington.

The Bengals home dates are Oct. 4 against Jacksonville and Oct. 25 against the Browns.

“This year will certainly be different, but both the Browns and the Bengals have worked exceedingly hard and have made extensive preparations to welcome a limited number of fans to their stadiums safely,” DeWine said. “These very thorough plans and safety precautions warrant a two-game trial to try and accommodate fans, at reduced capacities with social distancing and masks.”