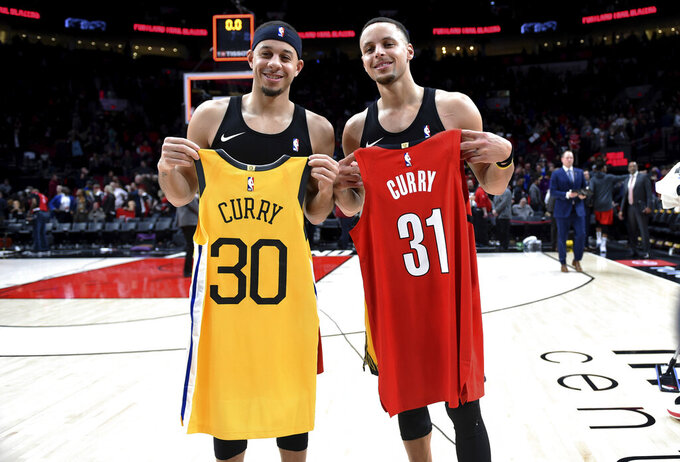 FILE - In this Dec. 29, 2018, file photo, Portland Trail Blazers guard Seth Curry, left, and his brother, Golden State Warriors guard Stephen Curry, exchange jerseys after an NBA basketball game in Portland, Ore. The Curry brothers are returning to their hometown of Charlotte, N.C, for the NBA All-Star weekend. Stephen, a two-time league MVP, will join younger brother Seth in the 3-point shootout on Saturday night at the Spectrum Center and then play in his sixth straight All-Star game on Sunday. (AP Photo/Steve Dykes, File) 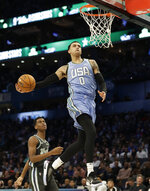 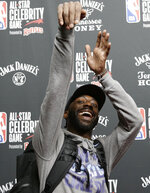 Kyle Kuzma of the Los Angeles Lakers scored 35 points, Jayson Tatum of the Boston Celtics added 30 and the U.S. beat the World team 161-144 in the Rising Stars game for first- and second-year players at All-Star Weekend.

Trae Young of the Atlanta Hawks finished with 25 points and 10 assists, and De'Aaron Fox of the Sacramento Kings had 15 assists for the U.S. Utah's Donovan Mitchell added 20 points, nine assists and seven rebounds.

It was the fifth time the U.S. vs. the World format was used for what was once known as the rookie game. The World now leads the all-time series 3-2, after its two-game winning streak was snapped.

Famous Los scored 22 points to win MVP honors, and the Home team held on to beat the Away team 82-80 in the All-Star Celebrity Game on Friday night.

Jay Williams scored 18 points for Home. Quavo scored 27 for Away and Hall of Famer Ray Allen scored 24 — though the NBA's all-time leader in 3-pointers made went 0 for 8 from beyond the arc.

McCutchen, the former referee who moved to the league office last season and now helps oversee the officiating program, said Friday that about two traveling violations get called per game on average. He says the league believes that the real number of travels that should be called is closer to five per game.

The NBA is no different than any other basketball league — if every letter-of-the-law travel was called, games could last for days. But McCutchen says the league is continuing to work with its referees on making that (and every) call consistently, and remains in constant contact with teams about concerns and interpretations.

But don't expect a change to a four-ref system anytime soon. The NBA has tinkered with it at the G League level, and McCutchen says "when we looked into it, accuracy did not go up."

Basketball Hall of Famer and activist Kareem Abdul-Jabbar says Colin Kaepernick's settlement of a collusion case against the NFL is a victory for the quarterback.

Abdul-Jabbar says he believes that Kaepernick still wants to play in the NFL. At a Hall of Fame event Friday at All-Star weekend in Charlotte, North Carolina, Abdul-Jabbar said Kaepernick "had a statement that he had to make through his demonstrations, but he's a quarterback and I think he should be working."

Abdul-Jabbar, a winner of the Presidential Medal of Freedom, was criticized when he changed his name from Lew Alcindor as a statement of his Muslim faith, and heard Dr. Martin Luther King Jr. speak in the mid-1960s.

Kaepernick and Eric Reid filed collusion grievances against the league, saying they were blacklisted because they kneeled during the national anthem to raise awareness to police brutality, racial inequality and other social issues. Reid's case was also settled Friday.

Abdul-Jabbar says Kaepernick is "a lot better than a number of the quarterbacks I see that have jobs now. So something's wrong here."

So, the best shooter in the Curry family is.... Sonya Curry?

The mother of Stephen and Seth Curry sank a one-handed, half-court shot — that she took underhanded — to help her three-person team beat teams led by her NBA sons and one by her daughter to win a family shootout at a newly refurbished at a community center in Charlotte, North Carolina.

It's a shot the Currys will be talking about for a long time.

After sinking the shot, Sonya raced around the court as fans in the crowded center went wild. She then did a celebration dance as her sons looked on in amazement and husband Dell applauded.

Seth Curry couldn't hold back laughter knowing he just got beat by his mom, a former volleyball player.

The Portland guard said afterward "that was a lucky shot, but she knocked it down on the big stage. That was good to see."

Seth joked getting beat by his mom was better than losing to his brother.

He said, laughing, "Hey, anybody but Steph winning was good."

The three-person teams included the Curry children and their families. Each team had to make a layup, a foul shot, two 3-pointers from the corner and the top of the key and, finally a half-court shot in the timed event.

The shootout was part of the dedication of the refurbished Carole Hoefener Center, donated by the Stephen and Ayesha Curry Family Foundation, Under Armour and Chase.

Webber, part of Michigan's Fab Five and a five-time NBA All-Star, was a finalist for the third consecutive season.

Fitch is a two-time NBA coach of the year who led Boston to the 1981 NBA championship. Johnson was a five-time NBA All-Star and an NCAA champion under John Wooden at UCLA. Jones was a four-time NBA All-Star, a huge part of Philadelphia's 1983 NBA-title-winning team and the league's sixth man award winner that season. Moncrief was a two-time defensive player of the year and a prolific scorer.

Sikma was an All-Star in seven consecutive seasons, had a brilliant shooting touch and helped Seattle win the 1979 NBA title. Sutton is a College Basketball Hall of Fame inductee and was the first coach to take four schools to the NCAA Tournament. Wallace was a massive part of the Detroit Pistons' run to the 2004 NBA title and a four-time defensive player of the year. Weatherspoon was one of the first true stars of the WNBA, and a five-time All-Star. Westphal was a stellar player and coach, and won a title with the Celtics as a player in 1974.

Also selected as finalists were Leta Andrews, who won 1,416 games in more than 50 years on the sidelines; Hugh Evans, a referee in the NBA for 28 years; Barbara Stevens, the longtime coach at perennial Division II power Bentley and a winner of more than 1,000 games.

The full Hall of Fame class will be selected at the NCAA men's Final Four at Minneapolis in April.

Warriors guard Steph Curry says it's been "really weird" staying in a downtown hotel in his hometown for the All-Star Weekend. It's leaving him a "little out of sorts."

When Curry usually visits Charlotte, North Carolina, he and his family stay at a home they once owned, located about 30 minutes from downtown. Or they stay at his parents' place about 15 minutes away. But with traffic and so much going on this weekend he decided to stay downtown, close to the Spectrum Center.

Curry says family is starting to trickle in and "the real fun starts in a little while."

He's hosting a community service event Friday afternoon before making a 30-minute drive north to watch his alma mater, Davidson College, play against St. Joseph's. He's excited that the Wildcats will wear alternate black and yellow neon Under Armour jerseys and the same Curry 6 Coy Fish neon shoes that he'll wear at Sunday night's All-Star game, which he says "is going to be pretty cool."

He did find time to stop at one of his local favorites for lunch — Bojangles chicken and biscuits. He jokingly says, "Probably got some crumbs in my teeth right now" while poking at his mouth.

Seth Curry has a bold prediction as to who will win the NBA 3-point contest on Saturday night.

"Me, me, I will," Curry confidently told The Associated Press on Friday at the NBA's Day of Service at the Charlotte Convention Center.

Curry will be competing in his first NBA 3-point contest against a solid field that includes older brother Stephen Curry, who won the event in 2015 and is third all-time in NBA history with 2,365 3-pointers made.

Seth Curry says, "I want to win it for myself and my family" saying it has been a goal of his to win the event since he watched his father Dell Curry compete in it at the 1992 All-Star game.

Stephen Curry sees the outcome a little differently. When he was asked who's going to win, he responded, "Oh I am."

Dallas rookie Luka Doncic said if he had to pick any five current international players to beat an American team of All-Stars the list would include Milwaukee's Giannis Antetokounmpo, Dallas' Kristaps Porzingis, Denver's Nikola Jokic, Miami's Goran Dragic and — he added with a smile — himself.

Doncic got his first look at All-Star life Friday, when he was part of the Rising Stars practice and media session in the morning. He'll play on the World Team against the U.S. in the Rising Stars game on Friday night.

Doncic says his adjustment to the NBA has gone better than expected after a very successful start to his career in which he is averaging 20.7 points, 7.2 rebounds and 5.6 assists per game

Doncic said that "it went great from the beginning" and that having the trust of his teammates made the transition easier.

He said didn't expect to have as much success as he's had this season, adding "I'm surprised a little bit, too."

NBA Commissioner Adam Silver has opened the annual All-Star Technology Summit by touting the "smart jersey of the future."

Silver used an app on a phone to change the number and name on the back of a jersey that was displayed on the side of the stage where he spoke, flipping it from a Kemba Walker model to a Stephen Curry model to a Michael Jordan model. Silver laid out what a fully customizable fan experience may look like in the NBA in 2038, right down to changing the name on the jersey those fans wear to games.

Silver's address opened the summit, a platform for discussions about basketball's future and the role of evolving technology.

The tech summit is in 20th year and draws hundreds of top league executives. Panels are scheduled on sports betting, disruptive technology, the relationship between athletes and technology, and ways to attract fans of the so-called Gen Z — the 2.5 billion people worldwide born between 1997 and 2010.