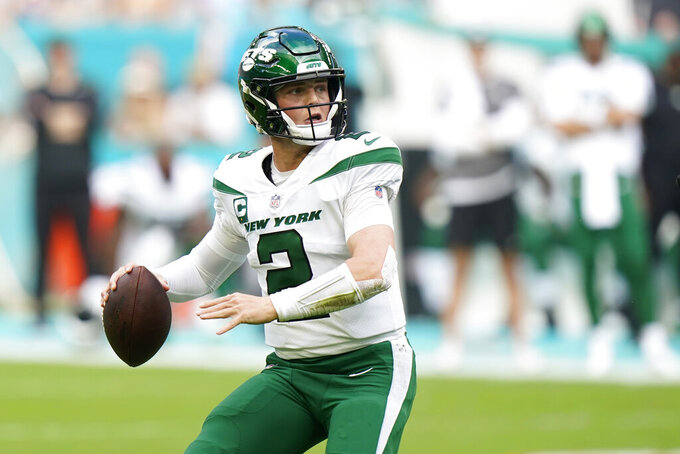 EAST RUTHERFORD, N.J. (AP) — This certainly looked a lot more enticing when the NFL schedule was released during the spring.

The Jacksonville Jaguars vs. the New York Jets in Week 16. Trevor Lawrence vs. Zach Wilson. No. 1 vs. No. 2.

Two quarterbacks bearing the weight of their new franchises on their shoulders.

Well, that's still very much the case, but the hype around the showdown Sunday at MetLife Stadium has been tempered by the struggles of Lawrence and Wilson — and their respective teams' seemingly reserved spots at the bottom of the NFL standings.

Just like last year, when the teams were jockeying for position at the top of the draft and Lawrence and Wilson were playing out their college careers as top prospects.

“That feels like a long time ago now,” Lawrence said.

Plenty has happened since, starting with Lawrence and Wilson being selected with the top two picks and celebrated as franchise-type quarterbacks.

Both were immediately thrust into starting roles and voted team captains by their teammates, but have experienced the bumps typical of rookie quarterbacks in the NFL.

And the wins have been tough to come by. The Jaguars are 2-12 and currently hold the No. 1 spot — again — for the draft in April. The Jets are 3-11 and sitting at No. 4. So the top of the draft is still very much in play for both teams, depending on what happens Sunday.

Lawrence has just one touchdown pass in his past seven games, giving him just nine TDs and 14 interceptions while starting every game this season.

"I look at that and I hate seeing that just because that means we’re not scoring a lot of points," Lawrence said. "It’d be different if we were scoring points still in the run game or whatever it is. If we’re still able to win games, that’s fine. That’s my job is to try to win games. But when you see that and you’re not scoring points, those kind of goes hand in hand.

“It’s disappointing and it’s something that we’re definitely trying to work on. We need to be more productive.”

Wilson, who missed four games last month with a sprained knee ligament, hasn't thrown a touchdown pass in his past two games. But he has also gone consecutive games without an interception. And that's a sign of progress, if ever so slight.

Wilson has six TD passes and 11 interceptions in 10 games, and his 56.2 percent completion rate is the lowest in the league. His biggest struggles have come on short passes, something he showed more confidence with at Miami last Sunday.

“What’s encouraging about him is he is learning so many different things and he is getting better at a lot of different things,” Jets coach Robert Saleh said. “He’s got to go through these tough moments like this.”

The game marks the fourth time in the common-draft era since 1967 that quarterbacks taken with the top two picks will face each other as rookies. It's also the latest in a season it has happened.

The most recent time came in 2015, when Tennessee and Marcus Mariota, the No. 2 pick, topped Tampa Bay and Jameis Winston 42-14 in Week 1 of the season.

The others: Peyton Manning (No. 1) and Indianapolis beat the Chargers and Ryan Leaf in Week 5 of the 1998 season; and Seattle's Rick Mirer (No. 2) topped New England's Drew Bledsoe in Week 3 of the 1993 season.

The Jaguars are hoping a week without drama will pay dividends on the field. They were admittedly stunned when coach Urban Meyer was fired last Thursday, three days before hosting Houston, and looked lost at times in a 30-16 loss to the Texans.

Offensive coordinator and interim coach Darrell Bevell called plays from the sideline, but has since transferred that duty to passing game coordinator/quarterbacks coach Brian Schottenheimer. Bevell will now be able to devote more attention to both sides of the ball.

Schottenheimer’s approach could provide a jolt Jacksonville needs. The offense has just seven touchdowns in its past eight outings. And three of those came in the fourth quarter with the Jaguars trailing by double digits.

The Jets dealt with a coronavirus outbreak during the week that sidelined Saleh, along with 20 players on the active and practice squad rosters through Thursday.

If Saleh didn't clear protocols in time to be on the sideline Sunday, tight ends coach Ron Middleton would serve as the team's acting head coach against the Jaguars. Middleton was running practice on the field, while Saleh was still involved with virtual team meetings.

Jets linebacker Quincy Williams could be the latest ex-Jaguars player to find success against his former team.

Jacksonville cut Williams in September, parting with a 2019 third-round draft pick because he wasn’t going to start and wasn’t going to contribute on special teams. He has since flourished with the Jets, ranking second on the team with 90 total tackles.

“I still think there’s way more in the tank for him,” Jets defensive coordinator Jeff Ulbrich said. “I think he’s a good player that’s playing good that has the ability, the potential in his body to be a Pro Bowl-type player.”

The Jaguars have had little luck in the past month facing guys they gave up on, beginning with Atlanta pass rusher Dante Fowler and continuing with Los Angeles Rams cornerback Jalen Ramsey and Houston defensive end Chris Smith.

Jacksonville has lost 15 consecutive games on the road, the longest current skid in the NFL. But the Jaguars won their previous game at MetLife Stadium, beating the New York Giants 20-15 in the 2018 season opener.