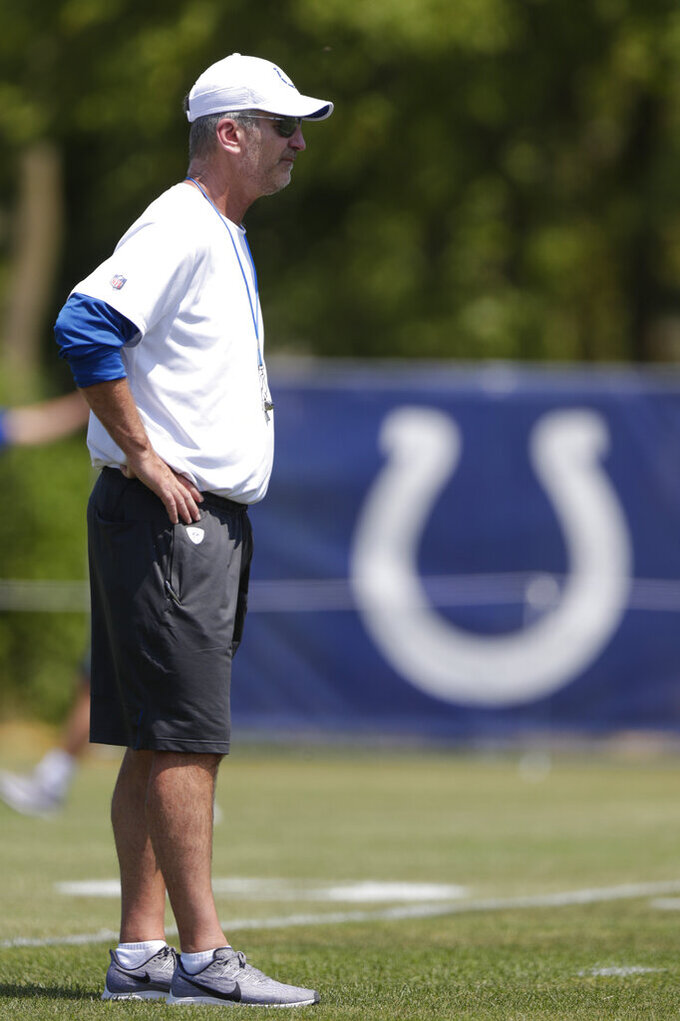 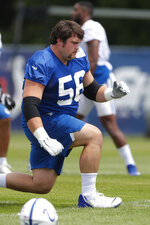 WESTFIELD, Ind. (AP) — Last season, Darius Leonard led the league in tackles, earned the Defensive Rookie of the Year award and was an All-Pro.

Most players would consider it a spectacular start to an NFL career.

The Indianapolis Colts linebacker views his rookie season another way — as a solid foundation to complete some unfinished business in 2019.

"I wasn't named MVP, I wasn't a Super Bowl champion and I wasn't a Pro Bowler," Leonard has said repeatedly. "So, there are still goals I hadn't reached last year. I just go in with the same mindset as proving everybody wrong and just outworking everybody on the field."

For Leonard and All-Pro left guard Quenton Nelson, this year's prime focus is proving 2018 was no fluke — and they're willing to do whatever it takes to achieve their goals.

While Leonard flew around the field , piling up tackles and filling stat sheets, Nelson's impact on Indy's offense was equally impressive. The sixth overall pick in the 2018 draft teamed with rookie right tackle Braden Smith, a second-round pick, to fill two glaring holes on an offensive line that allowed a league-high 56 sacks in 2017.

Together, Nelson and Smith helped the Colts go five straight games without yielding a sack, the league's third-longest streak since 1982; gave up a league-low 18 sacks all season; and paved the way for the Colts to rush for 200 or more yards in back-to-back games for the first time in the same season since 1985.

Nelson's reward: a Pro Bowl selection and his own spot as an All-Pro.

It's only the second time in league history rookie teammates made the team. The only other players to achieve the feat were Hall of Famers Gale Sayers and Dick Butkus of the Chicago Bears in 1965.

Now Leonard and Nelson are chasing bigger objectives for their encore performances.

"I would say more goals are more detailed on what I want to accomplish," Nelson said after Thursday's first training camp practice. "It's really about cleaning up my technique. But the No. 1 goal is to win the Super Bowl."

Just how much better can this tag-team tandem get?

Well, they excelled in spite of all the potential pitfalls rookie face: learning new teammates, new coaches and new systems.

Consider, too, that because of the draft and pre-draft workouts, Nelson couldn't participate in all of the Colts' offseason practices, and an injury prevented Leonard from making it onto the field until the first day of training camp.

Leonard also played most of last season with an ankle injury that forced him to miss one game and eventually prompted him to undergo minor surgery in May. Leonard pronounced himself fit and ready to go when the Colts reported to camp at Grand Park Sports Campus in suburban Indianapolis on Wednesday, weighing in at a trimmer 220 pounds and determined to increase his 163-tackle total after correcting the mistakes defensive coordinator Matt Eberflus outlined on a highlight reel of missed tackles.

"Getting off blocks a lot faster," Leonard said. "I tend to stay on blocks much longer than I expected. Talking with Floos, we saw some things that I needed to work on, kind of my plant, point and drive, making tackles inside-out. Sometimes I overshoot a lot of tackles and I just use my athleticism and long arms. So now I just want to work by pinning their hip and making plays from there."

Nelson also starts Year 2 with a new look. His neatly trimmed hair has grown out, he's added a Fu Manchu and he appears more vocal than he was last season. He made a slight change to his offseason workouts while preparing to work with two new offensive line coaches, Chris Strausser and Howard Mudd, who emphasize technique. But at least Nelson knows the starting five is back, ready to keep Luck upright again and deliver on the goal of finishing with a top-five rushing offense.

Nelson knows what he must do to make it work.

"For me, it's getting my hands inside, keeping my elbows in in the run game and the pass game, and really trusting and believing in my technique," he said.

And if Nelson and Leonard hone their skills just a bit, they and their teammates know anything is possible.

"It's hard to imagine he could've had a better year than he did last year," coach Frank Reich said when asked about Leonard. "As good as he was, it's crazy to think that there are a million ways he can get better and he has to get better. I have heard him say that himself and we all know that that is the way great players think."