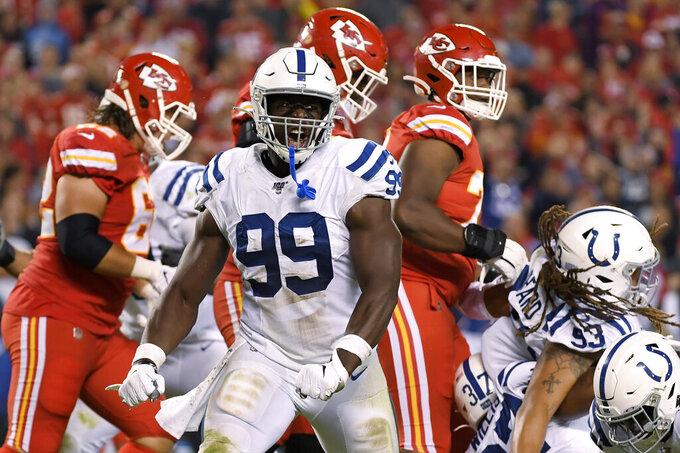 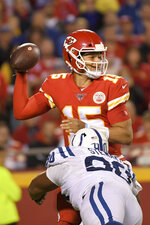 There, the energetic defensive leader anxiously paced back and forth, shouting at three television screens, dressed in his jersey while using social media to support his teammates. It was all he could do — until the doctors cleared him through the concussion protocol.

Leonard's long wait is expected to end Sunday when he returns to action by chasing down ball carriers and harassing Houston quarterback Deshaun Watson.

"You weren't really in the game plan, you weren't really doing anything with the team, so I felt like I was kind of away from everybody," Leonard said Monday, explaining the wait before he was cleared last week. "To cheer myself up, I put on a helmet, I put on a jersey, to kind of try to get my personality back, do something to get my spirits up."

He didn't stay down long.

When the Colts returned from their bye week Monday, Leonard was a bundle of energy following his first full practice in nearly a month.

The boisterous and proud South Carolina State alum entertained teammates during a raucous locker room game of corn hole that kept him laughing and shouting. But the Colts know Leonard will make even more noise with the AFC South lead on the line this weekend.

As a rookie last season, Leonard led the league with 163 tackles despite missing one game with an ankle injury. And although he hasn't played since Sept. 15, Leonard still ranks sixth on the team in tackles with 18.

And when the nimble Watson starts moving around, Leonard is one of the rare guys who can run him down.

Without Leonard, the Colts (3-2) had mixed results.

They started fast against Atlanta in Week 3 and wound up barely holding on for a 27-24 victory. The following week, the Colts offense rallied late but the defense struggled to get off the field in an uninspiring 31-24 loss to Oakland.

Their passion returned for a "Sunday Night Football" performance in Kansas City where Indy's defense turned in its best performance of the season in a 19-13 victory that had Leonard hooting and hollering as he chose which television screen to watch based on how the Colts performed while he was watching.

"I'm very superstitious," Leonard said. "That was one of the hardest things I've had to do, especially at crunch time because I just wanted to be there."

Leonard wasn't the only key defensive player helped by the bye week.

Starting safety Malik Hooker hasn't played since tearing the meniscus in his knee against Atlanta and a concussion kept Clayton Geathers, the Colts' other starting safety, also out at Kansas City.

Reich said Hooker's status will be determined later this week. But because Geathers unlike Leonard, endured no lingering headaches, he also has been cleared and is expected to play Sunday.

The Colts are eager to get both players back, particularly Leonard.

"He's a special player," middle linebacker Anthony Walker said. "You can just feel the energy and juice he brings on the field."

As for Leonard, he plans to be every bit as loud and excited on the field as he was watching from home.

"It was definitely tough being away from the team, not being able to go out there and help your brothers out," he said. "It definitely was rough, especially when I couldn't even be on the sideline."

NOTES: The Colts placed defensive end Kemoko Turay on injured reserve. Turay suffered a fractured and dislocated right ankle late in the Chiefs game. Indy replaced Turay on the active roster by signing defensive tackle Carl Davis on Monday. Davis played in 33 games with Baltimore and Cleveland since 2015. Baltimore selected Davis in the third round of the 2015 draft.