Lessons learned? XFL hoping time to prepare is a benefit 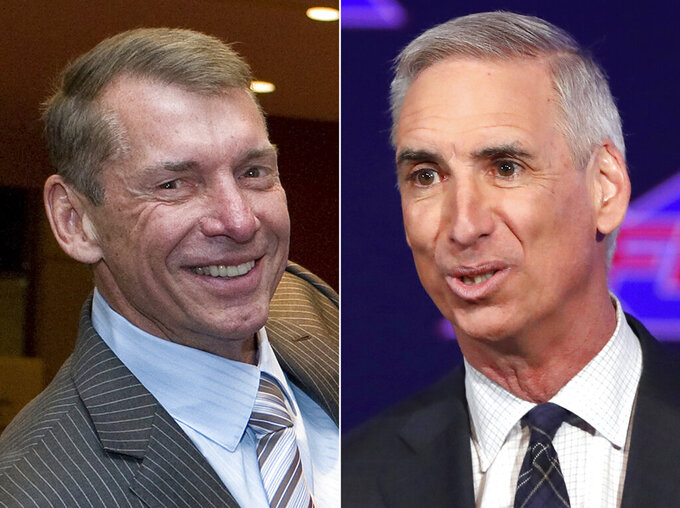 FILE - At left, in a May 18, 2012, file photo, Vince McMahon is shown at the Republican state convention in Hartford, Conn. At right, in a Feb. 7, 2019, file photo, XFL Commissioner and CEO Oliver Luck makes comments during a news conference in Arlington, Texas. The XFL has reached multiyear agreements with ESPN and Fox Sports to broadcast its games beginning in 2020. The league also announced Monday, May 6, 2019, that its season will start Feb. 8, the weekend after the NFL season ends with the Super Bowl. This is the second time Vince McMahon has launched a football league. (AP Photo/File)

LOS ANGELES (AP) — Oliver Luck has noted that there is a graveyard full of tombstones for spring professional football leagues going back more than 40 years.

That graveyard filled a plot two months ago when the Alliance of American Football folded eight weeks into its inaugural season, but the XFL commissioner thinks lessons learned from other leagues have already come in handy with a reboot of the XFL less than nine months away from kicking off.

"We recognize it is a challenge. Spring football has seen a number of failed ventures over the years," Luck said. "You need a solid business plan, capital commitments, good partners across the board and time. We're in a pretty good position to come out of the gates stronger."

The XFL's first games on Feb. 8, 2020, will come more than two years after Vince McMahon announced in January of 2018 that he was bringing the league back. Besides time, McMahon has given the league plenty of resources.

McMahon has invested nearly $400 million in the XFL with three sales of his shares in World Wrestling Entertainment the past 16 months. He made his biggest investment on March 27, selling 3.2 million shares that were worth approximately $272 million.

The last version of the XFL in 2001 was a joint venture between WWE and NBC. McMahon has started a separate company — Alpha Entertainment — to operate XFL 2.0.

While McMahon was the face of the league the first time around, he has let others run with the ball during this launch. When the eight teams were announced last December, McMahon gave a short set of remarks before handing the rest of the proceedings to Luck, who has an established history as a sports executive.

Luck came to the XFL from an executive leadership position at the NCAA. He previously was West Virginia's athletic director, helped launch Major League Soccer's Houston Dynamo and was NFL Europe's president.

"That's a purposeful and intentional decision," Luck said of McMahon. "When I first started talking to Vince, which was almost a year ago, he made it very clear that he was running WWE and wanted a football face out there."

Even with McMahon's stock sales, a Securities and Exchange Commission filing shows that he still holds stock that represents approximately 80.1% of WWE's total voting power.

Earlier this week the XFL announced multiyear contracts with Fox and ESPN to televise games which came on the heels of a deal with Elevate Sports Ventures to manage ticket sales. The San Francisco 49ers are one of Elevate's stakeholders.

Only two AAF teams were in NFL markets, whereas St. Louis is the only XFL team in a market that doesn't have an NFL team. Los Angeles and New York, which had XFL teams the first time around, are back and are joined by Dallas, Houston, Seattle, Tampa Bay and Washington.

Jeffrey Pollack, the XFL's president and chief operating officer, said being in established football markets is the smart thing to do. Pollack also added that he could envision it being around $100 for a family of four to attend a game.

"In its most fundamental form, being able to go to a game is part of having more access. It is also about the gameday experience, what our broadcast partners do and our digital content," he said.

With kickoff less than nine months away, coaches have been named in all but one city and team presidents are in place in four markets. Coaches include Bob Stoops in Dallas, Marc Trestman in Tampa and Jim Zorn in Seattle.

Coaches are also their own general manager, which was an important selling point for Winston Moss, who was named Los Angeles' coach on Tuesday.

"I'm going to shop, cook them and serve them up," Moss said.

The league has already done some rules experiments with a spring league in Austin, Texas, and will have another development session later this spring in California. Luck said there is an emphasis on a crisper pace to games, but didn't reveal much more about proposed changes.

One thing that Luck did admit though is that there will be kickoffs in the XFL, which the Alliance did not have. Possessions in the AAF started at the 25 yard line following a score.

"We are trying to address issues that fans have stated, like missing the kickoff return. We want to layer deeper and make safer but still keep it in the game," he said.

Luck said the league will start signing players next month with mini camps starting in November. Luck added that the biggest focus will be on finding talented quarterbacks, which he felt the AAF struggled at doing.

"When I looked at their strategy of paying everybody the same they underpaid at the top of their roster and overpaid at the bottom quite honestly," he said. "They had mediocre, I would say pedestrian quarterbacks at best and part of it was not willing to put more on the table. There are very good, young quarterbacks available. We can do a more selective job at the top of our roster and get better players."

While the league has already checked a lot off its to-do list, there still is plenty to go in the remaining nine months. First impressions are vital, but Pollack also said getting a foundation built for the long haul is just as important.